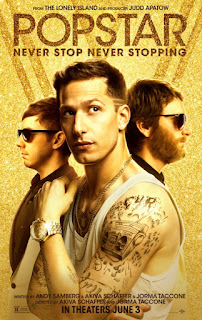 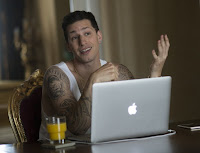 Known for their hilarious, eloquently crude SNL Digital Shorts and viral music videos (“Dick in a Box,” “Jizz in My Pants,” “I’m on a Boat,” etc.), comedy trio The Lonely Island and longtime friends Akiva Schaffer, Andy Samberg and Jorma Taccone expand their talents for writing and performing musical parodies with “Popstar: Never Stop Never Stopping,” a satirically cutting, often gut-busting mockumentary that skewers the music industry. Their first collaboration on a feature-length film was back in 2007 with “Hot Rod,” a goofball comedy that was more of one long non-sequitur than truly funny but has since earned a cult following. Writer-directors Schaffer (2011’s “The Watch”) & Taccone (2010’s “MacGruber”) and co-writer Samberg have to be smart because “Popstar: Never Stop Never Stopping” is so very dumb but cheerfully so and also very dead-on.

Born with musical talent, Conner Friel (Samberg) is a dim-witted, egotistical rap sensation, a former frontman of band Style Boyz who goes by Conner4Real. As his career as a solo artist skyrocketed, his fellow artists and friends, Owen (Taccone) and Lawrence (Schaffer), went different ways, with Owen staying on as Conner’s iPod-playing DJ, while Lawrence left the industry altogether to live on a Colorando ranch. Staged as a behind-the-scenes account, the film follows Conner’s rise to fame, leading up to his second solo album, CONNquest, that ends up flopping. With the best efforts of his manager (Tim Meadows) and publicist Paula (Sarah Silverman) who never met a gimmick they didn’t like, Conner tries adjusting to having an opening act on his tour with rapper Hunter the Hungry (Chris Redd). When Conner finally hits rock bottom, will he end up getting the Style Boyz back together?

Wearing its stupidity on its sleeve, “Popstar: Never Stop Never Stopping” is an on-target goof on concert movies to the point that it even tweaks the subtitle of “Justin Bieber: Never Say Never.” The music industry, by now, is low-hanging fruit, but boy does it make for some laughs. Formatted as an E! True Hollywood Story, the script revels in all the trappings of a music doc. The cameras are always on, not even to miss a publicity stunt when Conner plans an elaborate marriage proposal to movie star girlfriend Ashley Wednesday (Imogen Poots) that involves trained wolves and the angelic crooning of Seal. There’s also a who’s-who of musical artists in talking-head interviews, everyone from Ringo Starr to Usher to Carrie Underwood and Questlove praising Conner4Real for being such a trend-setter.

Andy Samberg is adept at playing a doofy, entitled narcissist like Conner. At the same time, he isn’t easy to warm up to, but Samberg has a way of being likably pathetic. That he’s so clueless in thinking a positive review of his new album by The Onion is real makes the character a bit more endearing than he has a right to be. As in any film produced by Judd Apatow or comedy loaded with SNL veterans, so many dependably funny performers pop up that there’s just not enough for all of them to do. Maya Rudolph is a hoot as a corporate brand rep named Deborah whose appliances play Conner's music. Joan Cusack appears all too briefly as Conner’s mother. There could have been even more of the always-game Justin Timberlake as Conner’s carrot-loving executive chef and Bill Hader as the popstar’s guitar technician.

As one-joke comedies tend to do, “Popstar: Never Stop Never Stopping” runs out of steam, even before the full 86 minutes are up. The film adheres so closely to a tried-and-true structure that of getting the gang back together, making the arc of Conner and his Style Boyz feel very preordained. Luckily, the inspired bits are many. There’s a vicious parody of celebrity gossip site TMZ with Will Arnett playing the Harvey Levin figure with his water bottle. And where else are you going to see a male fan trying to get his penis autographed? Also very funny: Sarah Silverman, as Conner’s cynical publicist, delivers a line involving the popstar’s disguise that makes him look like “Matthew Modine with a peanut allergy.” The Lonely Island have also written some cleverly cringe-inducing original singles, like a love song titled “Bin Laden,” the well-intentioned but misguided “Equal Rights” that proves Conner is progressive but keeps insisting he’s not gay, and the legitimately catchy “I’m So Humble,” featuring Adam Levine. All in all, “Popstar: Never Stop Never Stopping” is as much of a gigglefest as it is a zeitgeisty satire of the sad current state of celebrity stardom. It’s knowing and unapologetically daffy and sometimes really sharp.