Don't You Forget About Her: Overdue sequel “Finding Dory” a delightfully necessary catch 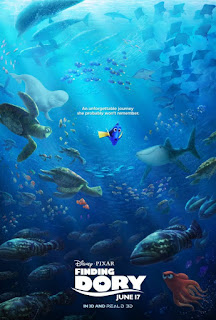 The term “classic” is not something that should be thrown around willy-nilly, especially when it’s something from the 21st century, but 2003’s beloved “Finding Nemo” is, indeed, one. It was and still holds up as a disarming, heartfelt, funny and wise undersea adventure with inspiredly fizzy humor, excitement, endearing characters, and a sincere message delivered with warmth and truth. There are thirteen years between the original film and the sequel, but not every overdue follow-up has to be a slapdash hanger-on purely made for monetary gain and bedspread tie-ins. Unlike how 20th Century Fox’s Blue Sky Studios churns out a regrettably mediocre “Ice Age” sequel every few years, Pixar actually lets an appropriate length of time pass to tell a story that was worth telling. The computer-animation studio kept the bar high with “Toy Story 2” and “Toy Story 3,” and now the long-awaited “Finding Dory” more than measures up to Pixar's standards as the emotionally sound, lovingly conceived continuation we didn’t know we wanted and needed.

One year after helping clownfish Marlin (voiced by Albert Brooks) find son Nemo (Hayden Rolance, taking over for Alexander Gould), forgetful blue tang Dory (Ellen DeGeneres) now resides in the Pacific reef with her friends. When she assists Nemo’s stingray teacher on a field trip in a migration class, something in the lesson sparks a recall of her mother and father. Since Dory never gave up on the crotchety Marlin in his quest to find his son, the father-and-son clownfish team up with their amnesiac friend to track down her family. As the search party goes, Dory, Marlin and Nemo do reach Marro Bay, California’s Marine Life Institute, where Dory believes she grew up, but get split up in different exhibits and along the way meet various aquatic friends, some more helpful than others.

Doubly confirming that Pixar's next-level storytelling never panders to one age group and vocal performances can be something special when the casting fits like a glove, “Finding Dory” is beatific entertainment guaranteed to delight audiences beyond a single-digit demographic. It’s kind of a spin-off but more of a direct sequel, and it’s a natural progression for Dory. Writer-director Andrew Stanton (2012’s “John Carter”) returns, alongside co-director Angus MacLane, and first finds the lovable sidekick in her own origin story. Since she was a little squirt, Dory (Sloane Murray) suffered from short-term memory loss—or, in her words, “short-term remember-y loss”—that worried her parents, Charlie (Eugene Levy) and Jenny (Diane Keaton), but they loved her just the same and taught her how to find her way home. The scenes with the perfectly suited Levy and Keaton are as sweet as they are heartbreaking.

An irresistible standout in “Finding Nemo” with her winning vocal work as everyone’s favorite amnesiac blue tang, Ellen DeGeneres is just as adorable, bringing wonderfully daffy humor and emotional heft without ever becoming an abrasive pest. Sweet-natured in her naiveté, Dory can do whatever she puts her mind to because she was taught to never give up. With this being Dory’s story, Andrew Stanton’s sparkling screenplay opens up more emotional layers to the pre-established character, and as a plus, Marlin and Nemo still figure prominently without just swimming around in the background. DeGeneres’ platonic chemistry with Albert Brooks is still very funny and engaging as Brooks’ bond with Hayden Rolance’s Nemo is touching. In addition to those three, Ed O’Neill is amusing back-up as cantankerous, antisocial octopus Hank (Ed O’Neill), whom Dory meets in the tank at the Marine Life Institute and refers to as a “septopus” since he lost a tentacle. For Dory’s tag placed on her fin that guarantees her entrance back into the open water, he makes a deal to get her to her parents’ exhibit with the use of his camouflage skills. Other charming, memorable characters include Dory’s old “pipe pal,” short-sighted whale shark Destiny (Kaitlin Olson, TV’s “It’s Always Sunny in Philadelphia”), and echo-location-challenged beluga whale Bailey (Ty Burrell), as well as a pair of slacker sea lions Fluke (Idris Elba) and Rudder (Dominic West) who never leave their place on a rock, and a helpful loon named Becky who has seen better days.

Lovely to look at and filled to the gills with heart and wit, “Finding Dory” has the right to be regarded as that magical rarity that avoids all the pitfalls of being a disappointing sequel. It has similar narrative beats to “Finding Nemo,” but it has its own story to tell that, as the old adage goes, will make audiences laugh and cry. The animation is, without fail, appealing, colorful and textural in every oceanic detail. The undersea characters have genuine human emotions. Jokes are invented rather than rehashed. For instance, there’s a hilarious running joke involving Sigourney Weaver as the marine park announcer that hits every time, merely from DeGeneres uttering the actress’ name. Dory, Marlin and Nemo's journey is also thrilling and pertly paced from start to finish, cleverly jetting from water to land; the underwater spectacle of Dory and Hank swimming away from the grabby hands of the aquarium exhibit's child visitors is an inventive touch. Best of all, the message that one shouldn't let his or her handicap stop them from achieving their goal is sensitively and movingly handled. A joyful gem in the sea, “Finding Dory” deserves to be remembered as well as the first fish tale. Remember: What would Dory do?