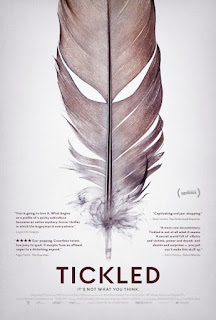 Tickling used to just be innocuous playtime, so when did it become a titillating sport? In “Tickled,” an engrossing documentary about an unusual and quietly popular subculture, the viewer goes right along with directors David Farrier and Dylan Reeve as they uncover the online world of “Competitive Endurance Tickling” and dig up even more dirt than the mere existence of it. It sounds like lurid fiction, but it’s not. Despite the cuteness of its title, “Tickled” will shock and start a conversation.

Covering curious human interest pieces of the weird, the bizarre and Justin Bieber, Auckland, New Zealand pop culture journalist David Farrier continued his beat when he happened upon a Facebook page for “Competitive Endurance Tickling” (CET). On there, he found countless videos of athletes—all of them fit and college-aged—being paid to be strapped down and tickled by other fit college-aged athletes. When Farrier contacted the business operator known as Jane O’Brien Media through email, he was mocked for his sexual orientation and called a “little gay Kiwi.” Nasty slurs then grew into threats: “If you want to stick your head in a blast furnace, do it.” Not wanting to stop there but actually motivated even more, Farrier and friend/co-director Dylan Reeve would soon set out to shoot a documentary on their findings. They flew to America and were able to speak with a former CET participant whose life was nearly destroyed by the high-paying sport, as well as a bondage-tickling fetishist. The filmmakers received threats of U.S. legal action filed against them, but Farrier would later find the bullying monster hiding behind different aliases and unlimited funds.

Any documentary exploring the anonymity of the Digital Age is a horror movie for our times. 2010’s more empathetic “Catfish” was one, and “Tickled” is another. It’s in David Farrier’s tenacity that this story was told at all. The harsh and unhelpful emails Farrier received from Jane O’Brien employee Debbie Kuhn would make anyone quit the investigation altogether, but not this Kiwi. Kuhn’s homophobic slurs are hilariously ironic, considering the homoerotic nature of the production of videos featuring muscular young men on top of one another tickling each other and giggling. Even as the plot thickens and darkens, one still can’t believe it. A film tackling such a specific subject that is still ongoing can’t help but be a bit anticlimatic, but “Tickled” is nothing short of fascinating. It’s disturbing, eyebrow-raising and purposefully infuriating. Stranger than fiction, for sure.