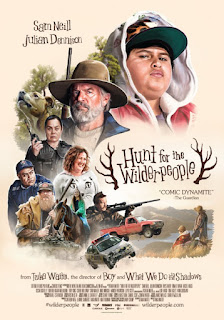 Put the Kiwi twist on any genre and the result can end up disarmingly wonky and fresh. Following up 2015’s clever, often hilarious vampire mockumentary “What We Do in the Shadows,” writer-director Taika Waititi adapts Barry Crump’s young-adult book “Wild Pork and Watercress” with “Hunt for the Wilderpeople,” a thoroughly likable coming-of-age comedy sauteed with the danger of an on-the-lam adventure story in the great outdoors. All in all, it’s a happy surprise that conquers convention with its own unique, homegrown spirit and manages an undeniable sweetness without coming across cloying or unearned. If only all stories about a teenage gangster wannabe and his crusty, illiterate hunter uncle going on the run could be this charming.

Rap-loving, not-so-pleasantly plump 13-year-old Ricky Baker (Julian Dennison) is a hooligan foster kid whom no one wants. Out of juvie, the boy is dropped off by case worker Paula (Rachel House) at the countryside home of eccentric couple Bella (Rima Te Wiata) and Hec (Sam Neill). She is more welcoming and cares for Ricky as if he were her own, while her husband is just plain cranky. After Hec is left alone to take care of Ricky all by himself, they receive a letter from Paula, who will have to bring Ricky back into state custody before other parental arrangements are made. Not about to let that happen, Ricky (with his dog Tupac in tow) stages his own death and sets off into the New Zealand bush. Hec goes looking for his would-be nephew and then the chase from Paula and her team is on.

Written and directed by Taika Waititi, “Hunt for the Wilderpeople” is unlike any comedy where a cantankerous adult and a precocious child put aside their differences and gradually learn how similar they are to one another. In its own quirky indie-movie kind of way, the film even avoids being too preciously cute, unlike Waititi’s self-consciously oddball “Eagle vs Shark.” When Ricky and Hec live off the land, they encounter other colorful characters, including Kahu (Tioreore Ngatai-Melbourne), a sarcastic girl who makes Ricky swoon when she rescues him on horseback; Kahu’s ne’er-do-well father TK (Troy Kingi), who wants to take “selfies” with media sensation Ricky; and Psycho Sam (Rhys Darby), a paranoid hermit. All of them add to the whole fairy-tale vibe of it all.

Relative newcomer Julian Dennison (2014’s “Paper Planes”) is fantastic, a real find and a pure natural with deadpan comic timing and the ability to make Ricky Baker’s troublemaker-with-a-heart-of-gold endearing and even adorable. He holds his own against acting veteran Sam Neill, who’s effectively prickly and unexpectedly funny as Hec; Neill’s flabbergasted reaction shots are priceless and their love-hate chemistry is wonderful. Rima Te Wiata (2014’s “Housebound”) has such a delightfully daffy presence as the cheerful Bella, who grows to genuinely care about the troublesome Ricky, even if her screen time ends as briefly as her foster mum character’s life. Rachel House, as over-eager child welfare worker Paula, is also a broad hoot as she takes a delusional turn into a ruthless police officer with a one track mind to find Ricky.

“Hunt for the Wilderpeople” is definitely a crowd-pleaser, but it’s the smart, offbeat kind, rooted in emotional truth rather than artifice. There are laughs both big and small, as well as an affecting payoff after an encounter with a wild boar. Hec being mistaken for being a pervert from Ricky’s double entendre-filled story to a group of hunters at a shelter actually lands a lot better than it sounds. There’s also a very funny Terminator/Sarah Connor running joke. It all culminates in a helicopter police chase, not unlike “Thelma and Louise” but without that same unsparing conclusion. Even though “majestical” isn’t a word as Hec tells Ricky, these characters make their film just that.