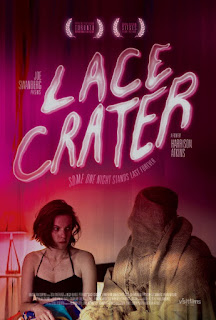 Not the first to come down this particular pike, what with “Contracted,” “It Follows,” “Nina Forever” and “Bite” in just the last three years, micro indie “Lace Crater” explores venereal anxieties within a horror narrative, again. That inexplicable title aside, cinematographer and short-form filmmaker Harrison Atkins makes an auspicious writing-directing feature debut with this understated, unusually spun mumblecore-ish horror drama. It might ultimately be a bit thematically murky, but "Lace Crater" carves out a distinct identity for itself in ways that are intimate and even tragic.

Coming off a bad breakup, Ruth (Lindsay Burdge) gets away for the weekend with a group of friends (Chase Williamson, Jennifer Kim, Keith Poulson) in one of their family’s homes in the Hamptons. She opts to stay by herself in the guesthouse, which man-bunned host Andrew (Andrew Ryder) claims to be “haunted.” The first night after she and her friends drink and get high in the hot tub, Ruth goes back to her room and ends up being spooked by “Michael” (Peter Vack), a nice stranger in a burlap cloak who happens to be a spectral presence. They start with conversation and then after Michael stops hesitating and shows Ruth his bruised but normal-looking face, they have a one-night stand. Once Ruth returns home, she begins feeling sick, the symptoms worsening from nausea to night sweats to delirium to throwing up an inky sludge and alienating herself from her once-closest friends.

In just 78 minutes (sans credits), "Lace Crater" tells the low-key story of two souls meeting one another, one alive but not well and one dead living in a closet. Initially, the viewer is unsure whether or not Michael means Ruth any harm; the cause of her fate is decidedly inadvertent on his part. What Harrison Atkins wants to say about having sex with a ghost isn't exactly clear, nor do we get much bearing on how damaged Ruth is from her past relationship with her ex-boyfriend (producer Joe Swanberg). Is this a finger-wagging cautionary tale about one-night stands? Or maybe a tragedy about a romantically hopeless human being no longer relating to the living? The end result is too ambiguous to say, however, hazy answers to such questions are probably beside the point to the film’s attention to mood and sensitive empathy. Lindsay Burdge (2016’s “The Invitation”) is the watchably offbeat and natural focal point as Ruth, hitting notes of vulnerability and loneliness that are nothing short of authentic. Once she starts not feeling herself, Ruth does what most people with health insurance would do; she visits the doctor who ends up diagnosing her with a rare sexually (spectrally?) transmitted disease. As it turns out, what Ruth comes down with cannot really be reversed.

Writer-director Atkins envisions Ruth’s tryst with Michael as a shadowy LSD trip and shoots the protagonist’s cracking psyche in a way that’s truly unsettling and controlled without resorting to cheap tricks. The film also has a deadpan sense of humor; for instance, the ghostly Michael is actually pretty handy with a sewing machine. Gideon de Villiers’ handheld camerawork and the cool synthesizer score by electronic band Neon Indian’s Alan Palomo lend themselves to Atkins’ creepy but dreamy tone. More strange than scary or funny, “Lace Crater” is almost too reserved to a fault, however, as a more thoughtful midnight movie, there is a certain sadness and affecting subtlety that hopeless romantics may find haunting. One can just imagine Dr. Ruth having a fascinating opinion on the subject.