We Go Together: "The Intervention" familiar but comfortably low-key and nicely acted 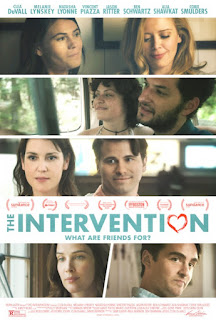 Bearing more than a passing resemblance to 1983 antecedent “The Big Chill” and even its second cousin, 2014’s “About Alex,” “The Intervention” can now be added to the collection of bittersweet weekend reunions among friends. It feels like a movie we have seen before (let alone one that comes around no less than three times each year at Sundance), and yet, that familiarity is part of the comfortable appeal. Even if there is nothing too revelatory about it, the film is frequently amusing and insightful with an excellent ensemble and more than enough emotional truth. In surrounding herself with friends who are all accomplished, likable working actors, actress Clea Duvall makes her directorial debut with “The Intervention,” and it’s a solid start.

Five thirtysomething friends institute a “marriage intervention” to hash things out between on-the-rocks couple Ruby (Cobie Smulders) and Peter (Vincent Piazza) for the weekend at Ruby and sister Jessie’s (Clea DuVall) family house in Savannah, Georgia. There’s Annie (Melanie Lynskey), who’s adverse to having children with fiancée Matt (Jason Ritter) and cannot stop drinking. The commitment-phobic Jessie has brought along her girlfriend of three years, Sarah (Natasha Lyonne), who lives in L.A. away from her girlfriend, and Jack (Ben Schwartz) brings along carefree, bi-curious 22-year-old Lola (Alia Shawkat). As Ruby and Peter needle each other before they even get out of their car and can’t let it go from there, Annie begins to strategize with the rest of the group on how to finally sit down their friends. Then again, perhaps those who live in glass houses, like Annie, shouldn’t throw stones.

The enjoyment had between the actors promptly rubs off on the viewer. Of the cast, Melanie Lynskey, Natasha Lyonne and Clea DuVall get to reunite 17 years after “But I’m a Cheerleader.” Lynskey is adorably neurotic as Annie, who tries to play mediator but wants to call the shots. For instance, just take her pep talk to Peter that begins as the “Cheers” TV theme song. Cobie Smulders gets to be spiky, and her dinner discussion on trying to understand Hitler’s point-of-view is priceless; playing a married couple with Vincent Piazza (2014’s “Jersey Boys”), one can feel the band-aid on their marriage coming off. Alia Shawkat adds the most levity as Lola, the only non-friend of the group who’s derided for her youth.

No matter the tension that is already there between Ruby and Peter and the ripple effect the married couple’s drama has on everyone else, the film feels like warming up in a cozy blanket when just watching everyone hang out. The chemistry amongst every cast member is organic, Clea DuVall's writing is wise and observant, and her direction is modestly assured. Slight and tidy though it ends up being, “The Intervention” is diverting in a low-key, unpushy indie sort of way.