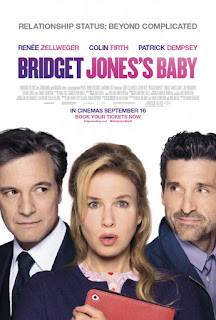 Oh, 2001 nostalgia. Renée Zellweger hasn’t graced audiences with her presence in six years (2010’s long-shelved horror film “Case 39”), so no matter the quality of her comeback, it is nice to have her back. It has been even longer since we last saw her reprise lovably clumsy and unapologetic British writer Bridget Jones, and it would be wonderful if it were as delightfully witty as 2001’s “Bridget Jones’s Diary.” The contrived 2004 sequel, “Bridget Jones: The Edge of Reason,” was a greatest-hits rehash that upped Bridget’s buffoonery, but Zellweger was still appealingly daffy and gave it more than enough moments of pleasure. With this third outing based on Helen Fielding’s characters, “Bridget Jones’s Baby” is alternately pleasant and bland with little of the original film’s sharp, sparkling writing and more jokes that feel labored. It’s no chore to catch up with Bridget, but she needed better support from material that didn’t feel old-hat in 2016.

When we last found Bridget, she was engaged to emotionally constipated barrister Mark Darcy (Colin Firth). Now, on her 43rd birthday, she finds herself alone again (cue the Celine Dion pop ballad) but a little lighter and no longer a smoker or a huge drinker. Pushing past her breakup and trying not to worry about being a singleton or a spinster while her friends are all married with kids, Bridget puts first her job as a TV news producer. When deciding to celebrate her middle-aged independence for a weekend trip to a music festival with friend Miranda (Sarah Solemani), also the anchor of Bridget’s news program, she ends up shagging American matchmaking-algorithm guru Jack Qwant (Patrick Dempsey). It’s just a one-night stand, right? Not long after, Bridget gets matched up with Mark as the godparents for one of their friends’ baby, and after the christening, they sleep together. If Bridget decides to juggle both men, she will have to tell them both once her pregnancy test reads positive. There’s a 50/50 chance Mark or Jack could be the father.

Occasionally funnier and more enjoyable than it probably has any right to be, “Bridget Jones’s Baby” will certainly appease Bridget’s fans no matter what. The first film’s Sharon Maguire does return as director and author Helen Fielding and screenwriters Dan Mazer (2013's "I Give It a Year") and Emma Thompson have affection for Bridget and allow her to make poor decisions in the workplace and her romantic life, even if some of them feel more like hacky, annoying romantic-comedy tropes. Times have changed somewhat; apart from her quitting smoking and weight loss, Bridget now keeps her diary on a tablet. Also, at the TV studio, there is a spiky new boss (Kate O'Flynn), bringing along her a crew of man-bunned hipsters and trying to bring a radical edge to the network. Through it all, Renée Zellweger slips back into her signature role as if 12 years never passed, and it’s still adorable to hear her drop an F-bomb in her British accent. With age and less pudginess, Bridget still charms as her plucky, relatable self, but her predicament gets stretched out predictably for too long, and there’s little tension to where it is headed by the final reel.

Bridget’s caddish ex-boss and fling, Daniel Cleaver (Hugh Grant), is now out of the picture and six feet under, and for better or for worse (maybe worse), that choice leaves more time for Mark and Jack. As Mark Darcy, Colin Firth is still intentionally milquetoast and seemingly dull but achieving likability through his deadpan wit. Retaining his “McDreamy” status, Patrick Dempsey is his amicable, seemingly perfect self, but he and Zellweger don’t have much sparkle together. Better are Sarah Solemani (reminding a bit of Emily Mortimer), a lovely, saucy newcomer as Bridget’s gal pal and news talent Miranda, and Emma Thompson, giving herself the funniest lines as Bridget’s no-nonsense gynecologist Dr. Rawlings who keeps describing her patient’s pregnancy as “geriatric."

With sequelitis already set in, “Bridget Jones’s Baby” strictly abides to formula, and sometimes, that’s just fine. Enough of it is comfortably cute. Although other times, the screenplay strains pretty hard to get laughs, hinging one too many times on Bridget's momentary incompetence, like feeding the wrong lines to Miranda who’s reporting on a genocidal dictator. A nonsensical complication that forces Bridget to forgetfully lock her belongings in an ATM vestibule is also eye-rolling. There was a fine line between comic gold and sitcom territory in the first two films, but this is middling sitcom stuff. With that said, there are still a handful of laughs, like a conversation between Bridget and her once-salty-mouthed friend Shazza (Sally Phillips) that equates “puppet shows” to sex in front of Shazza’s children. Despite the loyal efforts from all who have returned—don’t forget Gemma Jones and Jim Broadbent as Bridget’s mum and dad—“Bridget Jones’s Baby” forgoes a lot of the fun and snap of the old Bridget. Maybe this is one character who really has reached her sell-by date.