It Follows War: Sociopolitical climate and ghostly horror partner up in chilling "Under the Shadow" 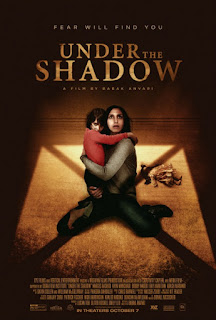 Many who steer clear of the horror genre might forget or fail to even realize that it's often used to express real-life anxieties and more kinds of evil than just masked killers stalking and slicing up sex-starved teens. Beneath the scares, George A. Romero’s “Night of the Living Dead” commented on 1968’s racism and 1974’s “The Texas Chain Saw Massacre” was Tobe Hooper’s response to government lies during the Watergate scandal and the Vietnam War. Now, take “Under the Shadow,” an Iranian horror film about the culture’s sociopolitical climate and female subjugation that marks the feature directorial debut of Iranian-born filmmaker Babak Anvari. Before the supernatural element of an Islamic spirit even creeps in, the setting in war-torn Tehran is frightening enough to make one worried for the safety of a mother and daughter. “Under the Shadow” admirably makes the claim that war and ghostly entities can work together to evoke terror in a horror film.

During the end of the Iran-Iraq war in 1988, Shideh (Narges Rashidi) is a wife and mother living in a Tehran apartment building. Returning home after being forced to quit medical school for her political protests over the revolution, she is frustrated to have to give up her career goals. When her doctor husband, Iraj (Bobby Naderi), is soon drafted to a military post, Shideh is relegated to a routine of working out with Jane Fonda on prohibited VHS and taking care of their young daughter Dorsa (Avin Manshadi) on her own. Each day, the people of Tehran are in alert with air raids and threatened by missile attacks, Shideh and Dorsa taking refuge with the neighbors in the basement of the building. Unlike other families in the complex, Shideh refuses to leave the city or their home, despite Iraj urging her to take Dorsa to stay with his parents. When a missile does hit on the top floor, it brings something with the wind — the wrath of a djinn.

Patiently directed by Babak Anvari, “Under the Shadow” is never turned into a dumbed-down box of scares. This is a welcome slow-burn, as the genre moments come gradually as an extension of the film’s already-horrific milieu. After Iraj is gone, the relationship between Shideh and Dorsa runs hot and cold. Before the djinn even makes its presence known, Dorsa’s favorite doll goes missing and then she comes down with a fever, and Shideh becomes very irritable after finding her workout video unspooled in the trash bin. Playing a woman stripped of her passion in the medical field and now restricted to her gender-based role, Narges Rashidi is excellent, remaining sympathetic even when her character hardens. When she has the chance to flee the home with Dorsa, Shideh doesn’t get too far, as she is stopped by police in the otherwise empty streets and taken to the station to be accused of being indecent for not wearing her hijab in public. Maybe she is better off staying put and defending herself from the malevolent imp.

A film as ambitious as “Under the Shadow” wants to have its horror both ways and, for the most part, earns it. Writer-director Anvari deftly suggests the notion that one evil spurs on another, and he doesn’t let one overshadow the other. Metaphorical or not, the presence of the djinn is alarming, particularly in a few instances. When Shideh wakes up to someone in bed next to her, it definitely isn’t her husband. The sight of the djinn wrapped in a printed fabric sheet is also used to jolting effect. Cinematographer Kit Fraser effectively creates a sense of claustrophobia, the windows in Shideh’s home all marked with tape in an X-shape never an option to escape. If it’s not quite as suffocatingly atmospheric or an unparalleled standout in the horror genre, “Under the Shadow” still packs a chilling punch, no matter where the audience lives.