How the West Became Lonely: "Certain Women" requires patience but it's unforced and beautifully acted 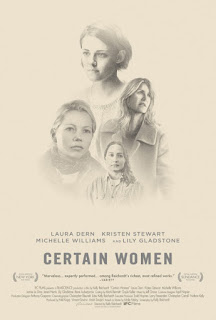 If there has ever been a more respected indie filmmaker with a more distinct voice and knack for capturing truth on screen, it is writer-director-editor Kelly Reichardt. Her films—2008’s “Wendy and Lucy,” 2010’s “Meek’s Cutoff” and 2013’s “Night Moves,” to name a few—flow at an unhurried tempo and soak up every pause and small beat between human beings, but they completely reflect the time and place of the stories being told. Some find her cinematic approach fascinating and others find it to be the filmic equivalent of watching paint dry, as if still waiting for a structured story to be told. This being her sixth feature and the fifth in the same milieu, “Certain Women” is purely attuned to Reichardt’s muted, minimalist, more meditative sensibilities. A paean to the American West and everyday living with all of its rhythms and fine details, the film is quiet, languid, and beautifully acted, but there is also an unevenness to the overall storytelling and not as much payoff as there could have been. Then again, that lack of clean closure seems to always be a deliberate choice with an auteur like Reichardt.

Told with grace and careful observation in lieu of plot-driven momentum, “Certain Women” is a triptych about the female experience in Montana, adapted from a collection of short stories by author Maile Meloy. The characters aren't all directly connected but share a malaise and fatigue of always feeling underestimated. The first one introduced is Laura Wells (Laura Dern), an injury lawyer struggling with disabled client Fuller (Jared Harris). When he will not listen to her advice that she has been telling him for months, Fuller hears the same from a male lawyer that he can’t sue his company after he had already settled. In a rage, Fuller takes desperate measures, and Laura’s work is still not done.

Then there’s Gina Lewis (Michelle Williams), stuck in a stale marriage with husband Ryan (James Le Gros) with whom Laura is ending her affair. Currently living at a campsite with their teenage daughter while their new home is built, Gina and Ryan stop by the property of their senile family friend Albert (Rene Auberjonois). Gina persuades him to sell them a pile of sandstone for their new house, and while they do eventually get it, Albert consistently dismisses Gina and directs his attention to Ryan. Finally, there is Jamie (Lily Gladstone), an introverted winter ranch hand finding unexpected human connection with young lawyer Beth (Kristen Stewart), who drives four hours two days a week to the town of Belfry to teach a night class. Will each of these women find what they want, or are their desires out of reach?

To get something out of “Certain Women”—or, frankly, anything from Kelly Reichardt—the viewer is required to have patience with the dawdling pacing and long takes and encouraged to take each snapshot as an authentic, unforced slice of life rather than trying to detect any deeper purpose. There are no sweeping, event-filled incidents, just emotions that ring true and motivations that are more allusive. Fortunately, none of the stories follow traditional narrative guidelines. And as always, Reichardt is able to get exquisite performances out of her actors. Laura Dern, Michelle Williams, and Kristen Stewart all turn in diverse but very understated and lived-in work, as does newcomer Lily Gladstone who’s internal but fragile and heartbreaking. Aiding the lovely performances is the stunningly stark but frame-worthy cinematography by Christopher Blauvelt, the director's frequent collaborator who can find beauty in the vastness and isolation of Montana. Individually, the third story resonates more than the first two, as there is actual tension in seeing whether or not Beth will requite Jamie’s company, and it’s the only one that might have held up as a stand-alone film. As a cohesive tapestry of lives, “Certain Women” is low-key yet affecting and deeply human for as much as what is not said and what is actually said. For those keeping tally, it even passes the Bechdel-Wallace Test with flying colors.