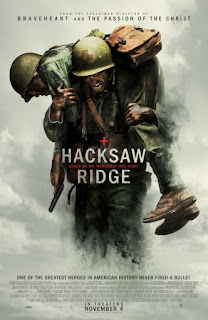 Following up two very accomplished and extremely brutal films (2004’s “The Passion of the Christ” and 2006’s “Apocalypto”) after a decade-long absence from behind the camera, director Mel Gibson returns to contextual violence with “Hacksaw Ridge,” a harrowing and emotionally stirring war-is-hell film with a pacifist's perspective. Written by Robert Schenkkan (2002’s “The Quiet American”) and Andrew Knight (2014’s “The Water Diviner”), the film tells the untold true story—some will not have had prior knowledge of it before now—of Desmond Doss, a young man from Virginia enlisting in the Army during World War II as a conscientious objector and serving as a medic. The irony is that Desmond refused to kill an enemy soldier or bear arms in combat due to his religious beliefs, and yet when being shot at by the Japanese, he still survived. Consequently, Desmond Doss was awarded the Medal of Honor and lived until he was 87 in the year 2006.

The front half of the film is earnest and sometimes even hokey. Framed through a fifteen-years-earlier flashback, the story takes the viewer back to a young Desmond and his brother engaging in a fistfight brought on by their drunken WWI veteran father, Tom (Hugo Weaving), who is all fine and dandy before Desmond hits his brother with a brick. At some point later on, Desmond (now played by Andrew Garfield) wields a weapon to save his mother, Bertha (Rachel Griffiths), from his father’s alcohol-driven abuse. After that fifteen-years-later mark, Desmond meets cute with a nurse, Dorothy Schutte (Teresa Palmer), whom he would go on to marry. Once he actually enlists to save and not take lives, the film shifts to Fort Jackson, where Desmond excels in training even without a weapon and then endures beatings and bullying by his fellow soldiers.

It isn’t until 1945’s Battle of Okinawa that “Hacksaw Ridge” hits its stride, though. Director Mel Gibson doesn’t gratuitously revel in the blood and guts; the war violence is astonishingly grisly, intensely visceral and truly horrific, as it should be. Once the men climb up the cliff face, nicknamed "Hacksaw Ridge," the Japanese enemy attacks, resulting in major loss on both sides. After the battle has run its course, survivors retreat back down, but Desmond finds it in himself to drag the severely injured to safety and eventually send them down the hilltop by rope. The once-shunned Desmond becomes a hero in a believable manner, saving up to 75 men (including a few Japanese), as he asks God to help him. Andrew Garfield could have just played Desmond Doss as a sincere good ‘ol boy, but there is more “there” there; he is noble and steadfast in his beliefs. Supporting him is a whole cast consisting of Australians, including an affecting Hugo Weaving, playing Tom Doss; Luke Bracey, as soldier Smitty Ryker; Luke Pegler, as comfortable-in-the-nude ‘Hollywood’ Zane; and Theresa Palmer, radiant and charismatic as Doss’ wife Dorothy. Only does Sam Worthington’s accent slip at one point as Captain Glover, who is convinced Doss is a coward. Also, against all odds, Vince Vaughn is actually quite credible as no-nonsense drill sergeant, Sgt. Howell, and evoking a little bit of R. Lee Ermey.

What might hold back “Hacksaw Ridge” from greatness, apart from the familiarity of so many other war films, is director Gibson’s lack of resistance from turning his protagonist into a Christ-like figure. Desmond Doss might earn the image for his act of courage, but it is too heavy-handed in the way he’s lowered down a cliff on a stretcher via a pulley, his body clutching a Bible and the lighting almost too heavenly. Otherwise, the film is made with skill, and kudos to a faith-based film with capable production values to not proselytize so much. Like 1998’s “Saving Private Ryan,” 2013’s “Lone Survivor,” 2014’s “Fury,” and many films well before then, war is hell, and we won’t soon forget it.