Sturdy Neck: Teller sells it in familiar but solid “Bleed for This” 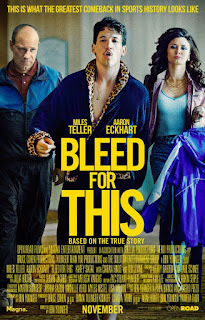 Boxing dramas seem to be biannual offerings now, what with Roberto Duran biopic “Hands of Stone” earlier this year and 2015’s one-two punch of “Southpaw” and “Creed.” “Bleed for This” can now be added to the list, it being the untold true story of World Champion Boxer Vinny Pazienza. There is the nagging feeling of déjà vu, but writer-director Ben Younger (2005’s “Prime”) gives Miles Teller a showy opportunity to be brash and scrappy. As much as we don’t really need the ninety-sixth movie—okay, that’s hyperbole—about a boxing underdog taken down by hard times and then beating the odds, “Bleed for This” makes up for its hardly remarkable narrative outline by being well-told and solidly acted.

In 1988, too-big-for-his-britches Vinny Pazienza (Miles Teller), known as “the Pazmanian Devil,” was still struggling to make a name for himself as a boxer from Providence, Rhode Island. His father, Angelo (Ciarán Hinds), has his back, but manager Lou Dova (Ted Levine) is ready to call it quits on Vinny. Three years later, Vinny finds former Mike Tyson trainer Kevin Rooney (Aaron Eckhart), who helps him make rank in the junior middleweight division. Shortly after winning two bouts that earned him the lightweight and middleweight champion belts, he becomes severely injured in a car accident, fracturing his neck. With a spinal fusion procedure, the doctor tells Vinny that he might never walk again, let alone fight. He is forced to wear a halo brace screwed into his skull, for six months, but during this time, Vinny goes against the doctor’s orders and starts up his old workout regime with Kevin’s help. Through his physical adversities, the Pazmanian Devil keeps his eyes on the prize.

For its first 45 minutes or so, “Bleed for This” feels like a rote, too-familiar rehash, learning everything it knows from past genre entries and barely warranting a reason why Vinny Pazienza should matter as a figure in the boxing arena. Change the names and locations, and the film virtually ticks all the boxes akin to so many movies before it. And then, the story actually begins at the end of the first act with Vinnie’s comeback and gets more compelling and a little more distinctive. As Vinny is burdened by wearing a halo, he still goes out in public and wants to train and lift again, but his strength just isn’t what it used to be. Once the halo comes off, nobody in his gym wants to spar with him, afraid that they could put him back in the hospital. Cocky and stubborn, Vinny doesn’t want to do anything else but fight. Without meeting him, it seems like Miles Teller’s first nature to be a live-wire. Ever since his sensitive, empathetic work in 2010’s “Rabbit Hole,” the 29-year-old actor has proven himself to be a tremendous find, always bringing a great deal of range, complexity and charisma to every role he’s taken on. In the non-fictional role of Vinny Pazienza, Teller brings a lot of bravado, apart from the fact that he bulked-up at the gym and grew a wispy mustache. (It seems worth noting that Teller, whose facial scars that have always been noticeable, was in an auto accident in 2007, prior to his career taking off, and now four of his films have all involved his character being in one.)

In the way Miles Teller depicts him, Vinny is refreshingly never painted as a one-dimensional saint. He is a hard guy to keep down, brass-balled as he is willful with a gambling vice. Even as the script doesn’t provide anyone else with quite enough depth, all the supporting actors actualize their roles with just enough color and little artifice. They include a very notable Aaron Eckhart, balding and beer-bellied as Vinny’s perpetually sozzled coach Kevin Rooney; Katey Sagal as Louise, Vinny’s worried mother and a devout Catholic who prays in her holy alcove to avoid seeing her son get hurt on TV; Ciarán Hinds, mostly tiptoeing around broad cartoonishness as Vinny’s father Angelo; and Ted Levine, who’s even more unrecognizable than Eckhart until one recognizes that distinctly deep voice as Vinny’s manager. As for all of the attractive young women in Pazienza’s life, they are too disposable and interchangeable to be active participants in the story; after a snappy Christine Evangelista as the gum-chewing Ashley seems like she might matter later on, she disappears altogether without mention and replaced by new arm candy who, in turn, becomes replaced.

Without doing any pre-viewing research to see what was glossed over, writer-director Ben Younger still gets more right than wrong. Unlike the well-acted but dreary slog that was “Southpaw,” there are welcome spurts of humor here. Even when the scenes in the ring are never as dynamically captured as they were in 2015’s “Creed” or as brutally violent in “Southpaw,” the last bout in particular packs punch. The car accident itself is startlingly executed, happening as quickly as most crashes, and the scenes around the dinner table of a loud Italian working-class family are very convincing, The period of the late-1980s and early-‘90s is also vivid, from the cars to the acid-washed jeans to the musical choices. Regardless of this being based on a true story, “Bleed for This” doesn’t redefine the filmic form. It does, however, deliver the goods, particularly for boxing-drama completists.