Animal Idol: “Sing” has its pleasures but mostly just harmless 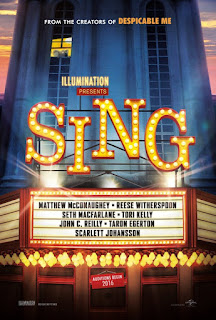 The latest effort from Illumination Entertainment who last gave audiences “The Secret Life of Pets” over the summer, “Sing” is a jukebox musical with anthropomorphic animals. It is never up to the standards of Disney Animation’s “Zootopia” from much earlier this year, although like DreamWorks Animation’s “Trolls,” it’s slight but enjoyable in the moment. For a while, writer-director Garth Jennings (2007’s “Son of Rambow”) and co-director Christophe Lourdelet are able to sustain their film with the setups of their colorfully detailed animal characters—there isn’t a human in sight—and the “let’s-put-on-a-show” energy of the auditions and final performances. When the film is limited in creative inspiration, it’s hard to criticize the cute factor too much. If it’s lightweight and forgettable compared to the bar that Pixar has raised, “Sing” will have to do as a perfectly pleasant crowd-pleaser.

Hoping to restore his father’s classic Moon Theater to its former glory with every cent he has, financially struggling koala Buster Moon (Matthew McConaughey) decides to promote a singing competition with a $1,000 grand prize. Unfortunately, after a misprint at the fault of Buster’s elderly chameleon secretary, Miss Crawley (Garth Jennings), all of the flyers mistakenly read a $100,000 winning. Before discovering the error, Buster already holds auditions after a gigantic turn-out. Among the competitors in the wacky troupe are overworked pig Rosita (Reese Witherspoon), a wife and mother of 25 piglets; moody porcupine rocker Ash (Scarlett Johansson) who gets in without boyfriend Lance (Beck Bennett); musically inclined gorilla Johnny (Taron Egerton) who would rather follow his dream than fall in with his bank-robbing father (Peter Serafinowicz); street-performing mouse Mike (Seth MacFarlane) who gets in over his already-big head with the mob; and eventually enormously talented but terribly shy elephant Meena (Tori Kelly), who suffers from so much stage fright to actually showcase her impressive pipes. Can Buster pull off a miracle before the bank repossesses the theater?

Silly, innocuous and eager to please, “Sing” has a wonderful cast and shines most during the musical numbers. The design of Buster Moon shares a smile with Matthew McConaughey, who voices him, but some of the supporting characters are much more engaging. Reese Witherspoon is very likable as the harried Rosita, who ends up being paired with flamboyant dancing enthusiast Gunter (Nick Kroll), a fellow pig, to perform a “spicy” rendition of Taylor Swift’s “Shake It Off.” Taron Egerton does an impressively gentle version of Sam Smith’s “Stay with Me,” and recording artist Tori Kelly provides major warmth as the meek Meena. Jennifer Saunders (Edina of “Absolutely Fabulous”) is also a snooty hoot as older sheep theater diva Miss Nana Noodleman, but the funniest and most lovable character, above all, is the dotty Miss Crawley (voiced by writer-director Garth Jennings).

The areas in which “Sing” doesn’t quite, well, sing are more on a screenplay level. Each character gets his or her own setback in the plot—Mike, at some point, owes money to a mob of bears after cheating in a card game and Johnny inadvertently lets his dad get arrested when he’s late as the getaway driver—but there might be more complications than necessary to heighten the stakes. The film is certainly lively during these more antic-filled moments, although everything would have benefited from a tighter focus. Like the “Despicable Me” movies and “Minions,” there is an appealingly absurd undercurrent to the humor. For example, koalas and sheep have a resourceful way to wash a car, and Miss Crawley’s glass eye repeatedly falls out of its socket. The film has its alternately amusing and tuneful pleasures, but it always seems to be on the cusp of being funnier and more clever without quite getting there. Consider “Sing” mid-tier Illumination; it’s easy to like but even easier to forget.