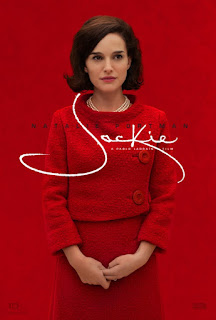 The most effective kinds of biopics about famous people are those that take a specific moment in one’s life and explore it with cinema’s cardinal rule of showing over telling in mind. “Jackie,” as in Jacqueline Kennedy, is not a conventional soup-to-nuts biopic of the former First Lady but an intimately observed portrait of her trauma during and after the assassination of her husband, President John F. Kennedy, in Dallas on November 22, 1963. Written by Noah Oppenheim (2016’s “Allegiant”) and directed by Pablo Larraín (2013’s “NO”), the film movingly captures the immediate aftermath of Jackie holding her dead husband’s head in her lap but also illuminates the dichotomy of how she carried herself privately and publicly. Challenging herself yet again, Natalie Portman dons the pink Chanel dress and pillbox hat, while accurately channeling the breathy cadence and embodying the glamour of Jackie, but she goes one step further and makes her human.

Opening not long after JFK’s burial, “Jackie” is told through a framing device where the grieving 35th First Lady is being interviewed by a Life Magazine journalist (Billy Crudup) at the Kennedy Compound in Hyannis Port, Massachusetts. As Jackie smokes and relays what happened that fateful day in Dallas, the film weaves back and forth from the present to planning her husband’s funeral procession and determination to honor his legacy. Director Larraín achieves an almost-dreamlike rhythm with this nonlinear storytelling and even seamlessly integrates archival footage into the production. A flashback to 1961 when Jackie gave a White House tour televised on CBS is an amusing re-enactment but also displays the woman’s elegant composure and knack for pageantry. The moments where she finds herself stumbling around the White House, refilling her rocks glass, changing her wardrobe and then quietly breaking down in the Oval Office are the most shattering. Richard Burton singing the title piece from the Broadway musical “Camelot” also becomes a significantly haunting throughline.

Any acting recreation of an icon takes the chance of coming off mannered. Admittedly, it takes some time to not be distracted by Natalie Portman’s surface mannerisms, but soon enough, any judgments that what she’s doing is just a thin, slavish impersonation give way for something more immersive. Although it must have seemed daunting at first, Portman goes beyond the look and sound of mimicry by finding shades and gravitas in the persona of Jacqueline Kennedy. Exuding class and grace, Jackie was engulfed by her own grief and tried coming to terms with being a widow of POTUS, but she was certainly strong-willed and had to find strength for her two children. The deep-bench supporting cast is uniformly solid, including Peter Sarsgaard, Jackie’s senator brother-in-law Bobby Kennedy; Greta Gerwig, as Jackie’s dedicated assistant Nancy Tuckerman; and John Hurt, as a priest. Madeline Fontaine’s costume design is impeccable and the foreboding, disorienting score is another mesmerizing piece of work by composer Mica Levi (her work for 2014's “Under the Skin” still stays with the viewer). It is not only in Portman’s vivid portrayal, but the marriage of Pablo Larraín’s filmmaking and other technical elements that help put the viewer into the same foggy and mournful headspace as Jackie. As long as a snapshot lends itself enough drama for the viewer, "Jackie" does more than what an episodic, superficial biopic might have done: it feels universal and bears Jackie Kennedy's soul.