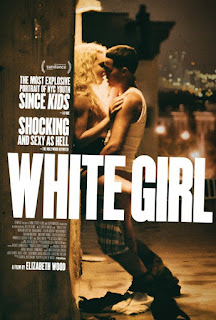 What a memorably crazy summer Elizabeth Wood must have had in her early twenties. A wild whirlwind of sex, drugs and other ill-advised life decisions, “White Girl” (an obvious title that doubles for a brand of cocaine) is writer-director Wood’s semi-autobiographical narrative feature debut, and she pulls no punches. It's unrated for good reason. In a fearless breakthrough performance that should push her into the big time, 21-year-old Morgan Saylor (2014’s “Jamie Marks Is Dead”) seizes her role without any false attempts to be likable or virtuous as a reckless bleach-blonde "white girl." Two weeks before her fall semester in college, Leah moves into an apartment in Queens with best friend Katie (India Menuez). She isn’t quite an innocent, getting high morning, day and night, but then gets worse with the people she surrounds herself. She has an unpaid internship at a hip magazine, run by coke-snorting Kelly (Justin Bartha), who offers her a line and then has his way with her in his office the first time they meet. Then once Leah becomes involved with a Puerto Rican drug dealer named Blue (Brian Marc), who hangs out on the sidewalk below her apartment window, she watches her sort-of boyfriend get busted by an undercover cop and locked up. In need of $13,000, Leah will do anything to get Blue back. Anything.

A cautionary snapshot of raw, youthful abandon, “White Girl” will find its closest marker of comparison to both Larry Clark’s “Kids” and Harmony Korine’s “Spring Breakers.” There is more than shock value here, or at least a purpose and a scathing statement about young white privilege and entitlement. Leah may be naïve in her decision-making but knows how to use her body for personal gain and finds a pro bono lawyer (Chris Noth) specializing in defending drug dealers. What’s almost as alarming as Leah’s instantly gratifying ways is the fact that she may just get away with it all and not be arrested herself. Even at 88 minutes that keep a tight focus, the viewer eventually becomes as numb as Leah does to her repetitive addictive lifestyle, until the only catharsis a film like “White Girl” can ever reach. One has to wonder if the world needed another wild-oats story like this to be told, but Morgan Saylor makes her high-fueled journey of desperation compelling, and as a piece of a filmmaking, this is a daring, sometimes electrifying effort from Elizabeth Wood.