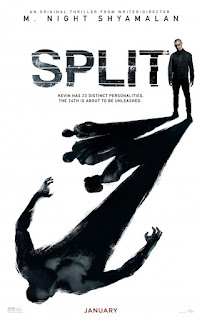 With 2015’s shivery, lightly humored “The Visit” marking his welcome return to form, writer-director M. Night Shyamalan has finally regained a new lease on life after his career lowlights from 2006 to 2013. In his second horror-adjacent effort produced by Blumhouse Productions and shot on another modest $5-million budget, “Split” puts hope in the Shyamalan name again. A corker of a chamber thriller made in a classical style, the film is creepy, classy and very nutty. It treats Dissociative Identity Disorder (DID) as a source of horror, as “Psycho,” “Dressed to Kill" and “Raising Cain" did, and James McAvoy is the show in a tour de force turn—or turns—that will knock your socks off. Even with an extraneous last-second surprise that neither makes nor breaks the previous 115 minutes, “Split” is an effectively unsettling and wholly absorbing chiller.

Upon leaving a birthday party at the mall, troubled Philadelphia teen Casey (Anya Taylor-Joy), along with birthday girl Claire (Haley Lu Richardson) and best friend Marcia (Jessica Sula), are kidnapped by a strange man named Kevin Wendell Crumb (James McAvoy). When the girls wake up in their captor’s underground lair, Claire and Marcia want to be proactive and fight him, but Casey responds differently, remaining still and reading the situation. Every time the man comes to their room, his identity changes, from a stern, high-heeled matriarch named Miss Patricia to sweet, rap-loving 9-year-old Hedwig to harmless clothing designer Barry and back to a germaphobic brute named Dennis who might be a rapist. It becomes apparent to Casey that the man with two dozen identities has brought them there for a disturbing sacrificial purpose, leading to the unveiling of his 24th personality, “The Beast,” who craves impure human flesh. Meanwhile, Dr. Karen Fletcher (Betty Buckley) keeps receiving emails and drop-ins from her patient, realizing two of Kevin's most diabolical alters are in charge now.

“Split” promptly jumps into its socko abduction setup. In the first few minutes, Casey is offered a ride home after Claire’s birthday party to which she was invited out of pity. As the girls wait in the car while Claire’s father puts presents away in the trunk, Casey notices something off in the rearview mirror; next thing she knows, the man that gets into the driver’s seat is a stranger who very efficiently puts all three of them asleep. This is a scary, dread-inducing opener that could happen to anyone and the mere suspense in whether or not these girls can escape by connecting with one of Kevin’s more benign personalities is extremely tense. Aiding the tension is meticulous cinematography shot in contained spaces by Mike Gioulakis (2015’s “It Follows”), achieving tangible claustrophobia and foreboding out of the situation with the three girls. In M. Night Shyamalan’s first step of averting expectations from what initially plays as a TV bottle episode, the film actually spins two more narratives that dive into the psychology of Kevin by way of Dr. Karen Fletcher and develop Casey with progressively icky flashbacks of a childhood hunting trip with her father and uncle.

The endlessly magnetic James McAvoy gives himself over completely to the juiciest role(s) of a lifetime, committing to every alter that shows his or her face. For all of the scenery chomping and showboating in the performance, McAvoy is spectacular. He gets to go wild, laying out distinct personalities and switching back and forth to different ones on a dime; it’s staggering when McAvoy is able to even run through all of them in a third-act scene. Haley Lu Richardson and Jessica Sula convincingly fulfill the roles of the two other abducted young women, but Anya Taylor-Joy is the standout as Casey, who has gone through life hoping for detention just to distance herself from everyone else. Between her turns in “The Witch” and “Morgan” last year, Taylor-Joy has such a thoughtful and watchable presence from her placid, ethereal face that it makes one excited to see her filmography grow. Another pivotal role is supplied by Betty Buckley, who’s excellent as Dr. Karen Fletcher, bringing much-needed warmth, intelligence and perspective. Luckily, Buckley makes the part more human and less of an "information dumper." Shyamalan makes a cameo, as he is wont to do, but it’s amusing and brief without becoming a distraction (unlike the sizable role he gave himself in “Lady in the Water,” and look how that turned out).

Methodically crafted with a quiet, measured sense of dread, “Split” will weed out the more impatient viewers. It does not spoon-feed everything and doesn’t always go where one expects. There are also off-kilter alleviations of humor with the childish Hedwig, who uses “et cetera” superfluously and keeps wanting to show Casey his room, and the ways the girls blankly respond to Kevin’s revolving door of personalities. And, as always the case with any Shyamalan joint, audiences might expect to have their minds blown with a twist ending, but in terms of “Split,” there is more of a low-key “aha!” moment. Only does Shyamalan become his own worst enemy in the very last scene, a left-field stinger that alternately no one will see coming (stay off Wikipedia!) and almost feels like a DVD alternate ending that could have been scrapped. Lips are sealed on the film’s unpredictable destination, but it does re-contextualize everything that has come before it. Before the filmmaker tries to open his latest film to a hopeful “Shyamalan Cinematic Universe,” “Split” works more than enough as a bravura game of twenty-four cats and three mice. It’s a treat to see that Shyamalan has his mojo back.