DVD/Blu-ray: "Keeping Up with the Joneses" middle-of-the-road but not unlikable 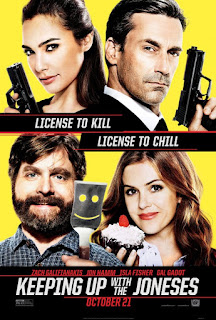 “Keeping Up with the Joneses” can't compete with the other action-comedies it emulates, like “The In-Laws” or the Albert Brooks-Michael Douglas redo, "True Lies," “Mr. & Mrs. Smith,” "Knight and Day" and “Killers,” in which one or two characters turn out to be involved in espionage. Director Greg Motolla, who has made good (2011’s “Paul) and even great films (2007’s “Superbad” and 2009’s “Adventureland”), and screenwriter Michael LeSieur (2006’s “You, Me and Dupree”) come up with this unremarkable action-comedy that wrings a few light chuckles out of its formula, but with this much talent, there should be more laughs than there are. It isn’t bad so much as it’s just an unassuming, middle-of-the-road time-waster all around.

Jeff (Zach Galifianakis) and Karen Gaffney (Isla Fisher)—he heads the HR department at an aerospace company and she’s an interior decorator—could use a little spice in their marriage and their safe suburban cul-de-sac, especially when they return home from dropping off their sons for summer camp. A little excitement creeps in when married couple Tim (Jon Hamm) and Natalie Jones (Gal Gadot) move in across the street. A travel writer and a social media consultant-cum-cooking blogger, the new neighbors are attractive and accomplished, but something seems too perfect about the Joneses. While Karen grows more and more suspicious of them, Jeff takes his time, being won over by a possible friendship with Tim. Sooner or later, though, the jig is up: the Joneses are not who they say they are and might just be undercover spies on a dangerous mission.

If there ever was one, “Keeping Up with the Joneses” is a case of the script being stale and tepid, and the likable cast giving it as much life as it can. Zach Galifianakis and Isla Fisher are in milquetoast, aw-shucks mode initially but each one has their moments as the film goes along, and Jon Hamm and Gal Gadot are solid and comedically inclined when the opportunity allows it. One could see the latter couple being funnier and sexier with sharper material not written by the “You, Me and Dupree” scribe. There aren’t enough big laughs to fill 105 minutes’ worth—for one, a better payoff is lacking for a potentially inspired gag when Hamm takes Galifianakis to an underground snake restaurant—but some lines are amusing and the big climax where the Gaffneys must go undercover at an Atlanta hotel is lively. “Keeping Up with the Joneses” will fall out of one’s memory as soon as it's over, but it is a pleasantly disposable farce, no more and no less.