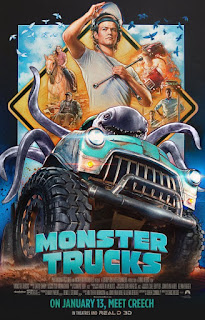 For all of its negative pre-release buzz, “Monster Trucks” is decent enough proof that any film in January shouldn’t be judged and bashed purely based on its dump-month release or preconceived notions. Lowered expectations only help it more, though. It is better than it has any right to be and it’s exactly what it sounds like, with a premise as high-concept as one gets. Take two things that 8-year-old boys love—monsters and trucks—and fuse them together for Nickelodeon Movies production “Monster Trucks,” a kid-and-their-unlikely-friend fantasy adventure that evokes 1982’s “E.T. the Extra-Terrestrial,” 1993’s “Free Willy,” 1995’s “Magic in the Water” and 2005’s “Herbie Fully Loaded.” Older viewers will have to put up with some pretty irresponsible destruction that still never feels as bombastic as a “Transformers” movie, but that is a small price to pay when one admittedly ends up caring about a boy and his living, breathing monster truck.

At a drilling site in North Dakota, Terravex Energy hits a water pocket two miles below. Against the assertion of scientist Jim Dowd (Thomas Lennon) that there might be an ecosystem, boss Reese Tenneson (Rob Lowe) orders to resume the drilling until the rig explodes and unleashes three primordial, amphibious creatures; two are caught but one escapes. Meanwhile, high school loner Tripp (Lucas Till) is working on an engine at an auto parts garage and junkyard and stops when he notices a tentacle slithering around the car crusher. It turns out to be the missing monster that drinks petroleum like water and wedges itself underneath the hood of Tripp’s beat-up pickup truck and powers it like an engine. A friendship is formed with the newly dubbed “Creech,” but when Tenneson’s thugs (led by Holt McCallany) come looking for the creature, Tripp, along with overachieving classmate and biology tutor Meredith (Jane Levy), must evade Terravex and help his monster pal reunite with his family.

Pure of heart and holding no pretense for being more than exactly what it is, “Monster Trucks” is agreeable, low-impact entertainment, nothing more and nothing less. Director Chris Wedge, making his live-action feature debut following animated efforts “Epic,” “Robots” and the first “Ice Age,” and screenwriter Derek Connolly (2015’s “Jurassic World”) concoct a familiar story out of spare parts with an eco-friendly message, but what really matters is the sweet charm between Tripp and Creech, as well as Tripp and Meredith. The characters are pretty much all stock, but they are made engaging by a cast that’s so enthusiastic and committed. They know they're not in an awards contender and are able to modestly transcend what’s on the page.

Lucas Till (TV's "MacGyver") brings loads of sincerity and makes for a charismatic protagonist as Tripp, and Jane Levy is a warm and likable love interest as Meredith. A welcome supporting cast of adult actors might be underused, particularly Amy Ryan, as Tripp’s waitress mother, and Danny Glover, as junkyard boss Mr. Weathers, who get two scenes apiece, and Rob Lowe doesn’t get to do much with the smarmy baddie role, but others make more of an impression. Barry Pepper exceeds expectations with a nice turnaround as the initially disbelieving Sheriff Rick, the boyfriend of Tripp’s mother, and Thomas Lennon is a little less Thomas Lennon here and excels with his uptight shtick as the well-meaning scientist who actually wants to save “Creech” and his monster family.

Inconsequential and undemanding without shame, “Monster Trucks” is a silly, sweet-natured diversion that won’t set the world on fire but achieves what it sets out to do. The concept is a strange one, but an appealingly strange one that never questions itself with overrated logic and makes one wish more studios would crank out kids movies as strange and fun as “Monster Trucks.” It runs over 90 minutes, but the time flies by without ever coming off too frantic, and the effects of the lovably slimy “Creech” are seamless, as is the action where "he" essentially drives a truck and hops rooftops. It knows its audience without pandering to the lowest common denominator, and that’s something.