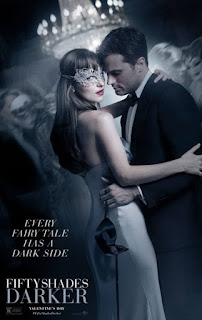 Never as transgressive or even as sexy as fans of E.L. James’ hot best-seller were hoping, 2015’s “Fifty Shades of Grey” still wasn’t as bad as so many made it out to be. Director Sam Taylor-Johnson brought a sleek style, screenwriter Kelly Marcel did what she could to tone down the self-serious inanity of the author’s erotic prose, and Dakota Johnson was a natural find with movie-star spark. With “Fifty Shades Darker,” a different writer and director have been attached to this second volume, and they both happen to be men. Director James Foley (2007’s “Perfect Stranger”) and screenwriter Niall Leonard (the author’s husband) take a stab at this sexually charged material, but they make that first adaptation look like yeoman’s work. Apart from one hoping the best for sympathetic, usually independent-minded heroine Anastasia Steele, “Fifty Shades Darker” is just dull. At the same time, it is practically the same movie, and as the second and middle film of a trilogy, it feels like total filler.

Ana (Dakota Johnson) has broken up with damaged 27-year-old billionaire boyfriend Christian Grey (Jamie Dornan), refusing to formalize their BDSM relationship as his submissive. She’s fine without him, now having an assistant job at a Seattle publishing house, but when Christian won’t back down, Ana agrees to have dinner. He is open to new terms with no rules, no punishments, and no secrets, just a “vanilla relationship.” Outside of the sex, Ana and Christian are so boring together as a couple that their story keeps having to drop in short-lived complications. Christian’s mentally unstable ex-sub, Leila (Bella Heathcote), comes out of the woodwork and begins stalking Ana. Christian attempts to get Ana to meet Elena Lincoln (Kim Basinger), his “Mrs. Robinson," with no luck, but then Elena keeps running into Ana at the Grey family functions to warn her that Christian isn’t right for her. And then, promptly after Christian decides to buy the publishing house where Ana works, boss Jack Hyde (Eric Johnson) tries getting fresh with Ana behind closed doors. It doesn’t help that they can’t even seem to have a conversation that doesn’t concern their relationship. They are so on-again, off-again, on-again and, well, you get the picture, and they don’t even share any similar interests or hobbies. If Ana and Christian stay on this road, their honeymoon phase will eventually run out.

“Fifty Shades Darker” isn’t necessarily darker or that eventful. And that’s even with a pointless, out-of-nowhere helicopter crash (!) at the start of the third act. Mostly forgettable from one scene to the next, the film never gains any true momentum or tension that actually sticks. Every conflict that’s introduced is resolved in a snap. In fact, a couple of details capture more attention than most of the supposed drama: (a) on the bizarre choice of the set decorators, there is an amusingly out-of-place sight gag of sorts in the form of a movie poster on Christian’s childhood bedroom wall; apparently, our little flogger was a big Vin Diesel fan back in 2004, and (b) there is a sneaky direct reference to “Working Girl,” worked naturally into the narrative after Ana gets promoted to fiction editor, in which Johnson quotes real-life mother Melanie Griffith’s line from that 1988 film’s finale. The film’s one allegedly “darker” element is Christian’s “singular tastes” stemming from sexual abuse as a young boy. There’s a pre-credits scene where adult Christian has a nightmare flashing back to cowering in his bedroom, but the script treats child abuse as a plot point in need of no further exploration, glossing right over it as soon as it’s mentioned. In what is supposed to be a serious moment, it’s hard not to suppress giggles when Christian gives Ana a tube of lipstick to draw a line around his scarred, albeit built, chest, meaning that she can touch him anywhere but in the circle. Why is she just now asking about the cigarette burns on his chest? As for the sex scenes, there is more passion to them when they’re not ending too early, and director James Foley has decided to play an inappropriate pop song over every single one of them. And, for a film billed as a fantasy targeted at female audiences, there is still strangely more female nudity than male.

Dakota Johnson is so accessible, self-deprecatingly funny, and fun to watch that she can’t help but be smarter than the script she’s working with. As Anastasia Steele, she is still able to carry herself with enough sexual agency that allows her to stand her ground and set the terms, even when Christian already has an answer for her. She gives Ben Wa balls a try at a charity masquerade ball, takes her panties off at dinner, and then gets stimulated by her man in a crowded elevator. Ana asks the right questions, too, like why Christian would have her bank account information to transfer $24,000 into her account with one phone call, and pieces together pretty quickly who the strange girl following her might be. Still looking good and scruffier, Jamie Dornan still hardly stands a chance with the way Christian Grey is written. The character of Christian is at least, ahem, attentive when it comes to pleasing his lady, but he’s oh, so, damaged and the film barely bothers to understand Christian as more than just a wealthy, good-looking bore. Christian has somewhat softened his ways but still treats Ana more as a piece of property. He buys all six portraits of Ana at her friend Jose’s (Victor Rasuk) photography exhibition, so no other man can gawk at her. When she tells him about a book expo that she’s expected to attend in NYC with her hunky boss, Christian texts back, “The answer is NO.” Too bad poor Dornan has more promise as an underwear model or even a pommel horse gymnast.

Next to Dakota Johnson and her subtle knack for finding humor in silly writing, there are other saving graces in “Fifty Shades Darker” that keep it from being unwatchable. The film is, once more, visually polished and armed with a few well-chosen musical choices (a coffeehouse cover of Coldplay’s “The Scientist” in the opening comes to mind). With the exception of Jennifer Ehle as Ana’s mother, most of the supporting cast is back, too, including the classy Marcia Gay Harden, as Christian’s mother, and eye-catching singer-turned-actress Rita Ora, who is a little less underused this time as Christian’s sister Maya. Otherwise, the series newcomers fall far short of their juicy potential. Bella Heathcote gives her all to the thankless role of Christian’s ex-sub Leila, who’s treated as an antagonistic specter; she also has no problem finding access into Ana’s apartment. In a sly bit of casting that takes one back to 1986’s “9½ Weeks,” Kim Basinger is a welcome sight as the woman who turned on Christian to kinky hanky panky. All she gets in return is a splash of champagne and a slap across the face. When the film dips its toes into shallow, soapy melodrama, it’s hard to deny the pleasure of a little camp, but caring about whether Ana and Christian finally get their happy ending is no more. Is anyone actually salivating for “Fifty Shades Freed” next year? For what it’s worth, we will all be freed after that.