No Checkout: Beyond its location, "Havenhurst" has little to recommend it 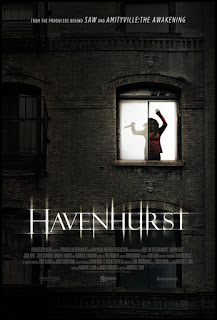 More “Crawlspace” than "Rosemary's Baby," “Havenhurst” has its production design in order with an atmospheric house of trapdoors and passageways. It’s too bad, then, that the script jumps the rails. Writer-director Andrew C. Erin and co-writer Daniel Farrands (1995’s “Halloween: The Curse of Michael Myers”) conceives of a solidly intriguing mystery, too, but only at first, until the payoff turns out to be so pedestrian. Julie Benz has the viewer’s sympathy as recovering alcoholic Jackie Sullivan, who checked herself into rehab after her addiction caused a tragedy involving her young daughter. Now sober, she hopes for a clean slate and a fresh start at Havenhurst, a stately apartment building for reformed addicts, run by superintendent Eleanor (Fionnula Flanagan). As Eleanor explains to Jackie the rules, anyone who slips and goes back to their old ways is evicted, so as Jackie makes that promise, she signs a lease. When Jackie realizes her close friend Danielle (Danielle Harris) and junkie boyfriend were the last to vacate the building—the film shows its hand early in the bloody opener, so we're certain that eviction is fatal—she also puts it together that she might have to hit the bottle again if she wants to uncover the dark secrets buried inside Havenhurst.

When “Havenhurst” achieves effectiveness, it’s during a few fleeting moments of tension in its creepy location. Director Andrew C. Erin shoots the heck out of Havenhurst, and considering the climax is shot in a lot of dank lighting, it’s pretty impressive how the filmmakers avoid visual murkiness more often than not. The rest of the film makes it hard to stay positive. How Sarah (Bella Shouse), a foster child living in the building, is used in relation to Jackie is mighty obvious. As if it’s a requirement in horror movies, Havenhurst’s residents have a tendency to be startled by a noise and wander around to investigate and/or sneak up on one another, but that tactic becomes so repetitive, you could set your watch to it. To a laughable degree, the key villain has a master key for every door, every switch, etc. and has super-human strength, throwing his victims across the room like every murder starts out as a WWE match. And, from here on out, if no other horror movie keeps dusting off the cliché where our hero conveniently finds newspaper clippings at the ready and linked to the evil goings-on at hand, that would be super. “Havenhurst” does have the decency to get this bit over with quickly, albeit in a most ham-fisted, comically stylized fashion, with overzealous pans across the headlines. At the very least, this modestly budgeted effort takes the admirably downbeat, less-traveled ending that a studio wouldn’t touch in case it were too unsatisfying. “Havenhurst” is just too unsatisfying in other ways.