When a Ghost Texts: Stewart mesmerizes in understated "Personal Shopper" 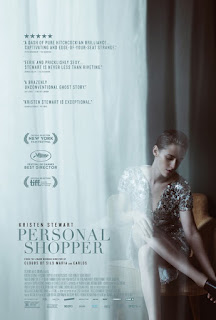 Since 2015’s densely layered “Clouds of Sils Maria,” writer-director Olivier Assayas has found a muse in the intuitive Kristen Stewart, who was the first American actress to win the César Award. Their second collaboration occasionally has echoes of their first, from Stewart both times playing a high-profile celebrity’s personal assistant constantly on the phone to the audience feeling like they are in a fog. Slippery and enigmatic but soupy, “Personal Shopper” marries several different movies together and mostly strikes a fluid balance. It’s a ghost story, but it’s also a mournful arthouse drama about grief, a meditation on identity, a bit of a whodunit mystery, and there is a lot of shopping and sometimes even trying on high-priced clothing made for a runway. With zero preparation on what it is or where it’s headed, the film is unexpected and entrancing in that way, but unless its meandering form is rewarding enough for you, not every piece coheres in the end.

An American living in Paris, Maureen Cartwright (Kristen Stewart) works as a personal shopper for a modeling socialite, Kyra (Nora von Waldstatten). By day, she mopeds around the city, running errands, buying designer couture to fill her employer’s closet, and then dropping off bags of clothing and jewelry at Kyra’s apartment. Maureen is not inspired by her job, but the main reason she stays in Paris is because she’s waiting to make contact with recently deceased twin brother Lewis and make sure he has found peace. She is also a medium, and before her brother died of a heart attack due to a malformation of the heart—a condition that Maureen shares and could claim her life at any time—the siblings made an oath for the one who passes to send the live one a sign. When Maureen thinks she might have made contact in his large country home, which her brother’s former lover (Sigrid Bouaziz) is desperately trying to sell, she isn’t quite sure if the presence she feels (and eventually sees) is Lewis. At the same time, Maureen starts receiving texts from an unknown number while she’s on a train to London. Does she have a stalker? Is it the spirit of Lewis who now might have unlimited minutes in the afterlife?

Reading aloud the premise of “Personal Shopper” to a casual filmgoer is bound to make it sound sillier than how it plays out. Filmmaker Olivier Assayas weaves a mysterious, lonesome mood that only initially seems like it will be a conventional, jump-laden spookfest. Thankfully, it is not, but the film could have been alternately titled “Medium,” as Maureen spends the night in her brother’s old chateau, following creaks and dripping faucets in the dark. The supernatural elements are rather delicately handled, too, at least before Assayas chooses to actually show the gauzy poltergeist floating around and vomiting an ectoplasm. As noncommittal as it often is, the film is actually best when it’s just observing Maureen’s day. During her off time, Maureen researches the abstract art of Swedish painter Hilma af Klint and watches an old movie based on Victor Hugo holding séances. The film’s most masterful stroke is how Assayas breathlessly executes a stalking scene through, of all things, text messaging and ratchets up the teasing tension to a nail-biting degree when Maureen’s phone goes off airplane mode. When she begins receiving those strange texts, the anonymous texter gets personal, prodding information out of her that leads Maureen to fulfilling forbidden desires, like trying on shoes and clothing that belongs to Kyra.

In step with the filmmaker’s understated European sensibility, “Personal Shopper” is concurrently contemplative and frustrating. Nothing seems accidental, though. It operates on a frequency that not everyone will take to, but Assayas takes his time, brings things to such a pin-drop hush, and deals in ambiguity so much that he never seems interested in satisfying audiences with easy answers. He obviously sees what Kristen Stewart can do, too, and gives her a lot of the heavy lifting. As Maureen, the 26-year-old actress mesmerizes, her nuanced, finely modulated work so subtle and unforced that one could easily accuse the performance of being a lot of nothing, but that would be a false assumption. Stewart speaks volumes without saying anything at all, essaying an adrift young woman with the desperation to make contact with her brother weighing her down. Yorick Le Saux’s camerawork is also a dream, particularly in one motion through a hotel hallway that follows an invisible presence down the hall, out of the elevator, and out of the lobby doors.

There is already a love-it-or-hate-it divide between both critics and audiences with “Personal Shopper,” but it would be entirely dishonest to say that the film doesn’t have the power to hold one’s attention as if under a spell. Like Maureen, the viewer never finds concrete answers and feels lost in limbo right along with her. That may be the point all along, but where it ends up in the last shot is almost too opaque to be accessible, holding back on the profoundly haunting catharsis Assayas clearly strives for. It’s easier to commend what the film tries to do rather than for what it ultimately achieves, and yet, it’s hard to stop thinking about the sections that do work and what the filmmaker’s muse can do with just a little.