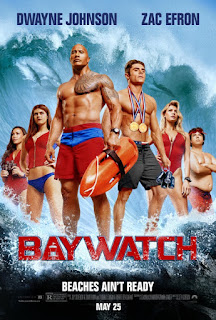 Retrofitting a dopey, long-defunct TV show into an affectionate homage-cum-parody never goes out of style. The template of taking the general premise of the property and running with an R-rated, self-referential approach looked easy with the surprising success of 2012’s “21 Jump Street,” along with 2014’s sequel-that-knew-it-was-a-sequel “22 Jump Street.” It was only a matter of time before “Baywatch” went through the TV-to-movie machine, and now that it’s here and designed as an action-comedy, too, it is never goofily shrewd or knowingly ridiculous enough. Ripe for a send-up, the earnest, irresistibly cheesy syndicated TV show “Baywatch” (1989-2001) had swimsuit-clad eye candy, led by David Hasselhoff and Playboy centerfold Pamela Anderson; an admittedly catchy theme song with Jimi Jamison’s “I’m Always Here”; and a mildly attention-holding soap-opera storyline per episode. Now, asking if 2017's “Baywatch” is a “good movie” isn’t really the right question when it just plays like an overblown, overtly comedic remake of the show, now with male nudity, four-letter words, and more dick jokes and gay-panic jokes than any movie truly needs. One patiently waits for it to get funnier and sharper, as most of the one-liners land with the heaviness of a beached whale, but if anything in the film acts as a proverbial life preserver for this lame, slapdash material, it’s the game, spirited and likable cast of hard bodies and one soft body.

Head lifeguard on the South Florida beach of Emerald Bay, Lt. Mitch Buchannon (Dwayne Johnson) is beloved by all because he takes his job so seriously and keeps everyone safe. On the day of tryouts for those interested in joining Mitch’s elite Baywatch team, including C.J. Parker (Kelly Rohrbach) and Stephanie Holden (Ilfenesh Hadera), showboating gold-medal Olympic swimmer Matt Brody (Zac Efron) arrives as an affordable PR opportunity for Police Captain Thorpe (Rob Huebel). Mitch tries breaking the hotshot celebrity, who disgraced his swimming career from late-night recklessness, and busts his balls before Matt proves his abilities and makes the team, along with committed Summer Quinn (Alexandra Daddario) and tech-savvy Ronnie Greenbaum (Jon Bass). When a bag of flakka washes onshore and a councilman’s already-dead body turns up on a fiery yacht, Mitch suspects both could be linked to the operations of beautiful posh club owner Victoria Leeds (Priyanka Chopra). Perhaps they should leave it the police, but if Mitch wants to keep his beach clean, his team will have to be more than lifeguards.

From the film’s gleefully over-the-top opening involving Mitch’s first rescue and the title card rising out of the water with leaping dolphins, all cued up to “Hypnotize” by The Notorious B.I.G., “Baywatch” almost works itself into the audience’s good graces, getting them ready to have a riotously fun time. Director Seth Gordon (2013’s “Identity Thief”) and screenwriters Damian Shannon & Mark Swift—you know, the team who had audiences laughing with the 2009 “Friday the 13th” reboot and 2003’s “Freddy vs. Jason”—seemingly acknowledge that the cornball, shark-jumping show wasn’t exactly high art in the first place but don’t seem fully devoted to be the least bit subversive, cheeky, or satirical. The mostly flat attempts at being self-referential include a police captain bringing Matt Brody on board the team to "restore the Baywatch brand," characters winkingly commenting on C.J. running in slo-mo, and Matt equating Mitch’s police-like desire to uncover a conspiracy to “an entertaining but far-fetched TV show.”

The by-committee script just isn’t on the level of a smart “dumb movie,” and at some point, the makers seem to stop being in on the joke when they try to be sincere. Tonally adrift, the film keeps scratching its head on what it wants to be and never quite finds a successful balance that isn't unattainable with the right care and guidance. It either takes itself too seriously, with Matt Brody getting a coming-of-age redemption arc and the boring, straight-faced drug-dealing/real-estate/trail-of-bodies-leaving conspiracy plot dragging the energy and would-be comedy down, or just can't help itself to wedge in protracted, lazily raunchy R-rated gags that predominantly involve male genitalia. Even resorting to having a character get his erection stuck between the slats of a wooden beach chair—think a less-funny “There’s Something About Mary”—and Matt checking a dead man's penis in a morgue drawer, the film still doesn’t take advantage of its R-rating, either holding back or trying too hard.

Collectively, the cast’s jovial enthusiasm goes a long way toward making their flimsy characters generally enjoyable to be around. Both built like brick shithouses and rivaling one another as hunks in trunks, Dwayne Johnson and Zac Efron amuse when they’re trading amiable insults, like Mitch always giving Matt a new nickname, such as “One Direction” and “High School Musical” (get it?). Individually, Johnson can’t help being anything but gregarious and charismatic as Mitch Buchannon, and it seems he can have chemistry with anyone on screen. Long establishing himself and no longer written off as just a pretty boy, Efron has come into his own. As cocky, Ryan Lochte-like dumbbell Matt Brody, he is in his element, poking fun at himself and his “Men’s Health” cover persona. The beefcake star is also game to cross-dress when Matt and Mitch need to go to one of Victoria’s parties in disguise.

Of the smart and appealing women in the cast, Alexandra Daddario (who played Dwayne Johnson’s daughter in 2015’s “San Andreas”) has the most screen time as Summer, and the actress admirably plays well with a one-liner and convincingly allows Summer to dish it out. Ilfenesh Hadera (Showtime's "Billions") is eye-catching and gets to talk smack at Matt Brody's expense, but she's still underutilized as the no-nonsense Stephanie Holden. Beyond her attractive looks, winning newcomer Kelly Rohrbach is a sweet, warm presence without looking dumb, embracing her role of C.J. Parker without being merely misused as a plaything through a smarmy male gaze. While Jon Bass (2016's "Loving") is more endearing than he is annoying as doughy trainee Ronnie who desperately pines for C.J. (and who wouldn't?), Yahya Abdul-Mateen II (Netflix's "The Get Down") easily walks away with the most laughs as Sgt. Ellerbee, who can’t get it into the lifeguards’ heads that they aren’t cops. “I’m not a Bond villain . . . well, yet,” is the closest gorgeous Bollywood actress Priyanka Chopra (ABC’s “Quantico”) comes to having any wicked fun with the villainous role of Victoria Leeds who gets to purse her lips and look va-va-voom in a lot of plunging-neckline dresses.

Deliberately tacky and easy-going, “Baywatch” is still never as much fun, funny, or clever as it ought to be. When director Seth Gordon isn’t stacking on the labored gross-outs, there is a cute running joke with an ever-changing figure of Mitch in his home aquarium that keeps an eye on Matt who needs a place to crash. There are obligatory cameos from two members of the original show, and only one of them vaguely works; the one that doesn’t work earns more of a groan than a chuckle and goes on much too long. And, it sounds silly to nitpick, but are the CGI and green screen effects supposed to look so third-rate? They’re not distractingly bad enough to seem intentional or ironic that they end up in an odd grey area and just suck most of the supposed peril out of the life-saving action sequences. “Baywatch” isn’t very good, but it doesn’t have a mean bone in its chiseled, albeit bloated, body. It’s honkingly dumb as silicone but cheerfully so, and too fleetingly likable for misery to set in, and it invokes a certain breezy, summery air when moviegoers seek escapism that isn't mentally taxing. However, whereas both “Jump Street” movies goofed on its source material and managed to make both projects their own, this half-hearted goof instead offers a steady diet of lameness. At least it's not entirely in slo-mo.