Aging Wheels: "Cars 3" safe but wistful, charming, and not "Cars 2" 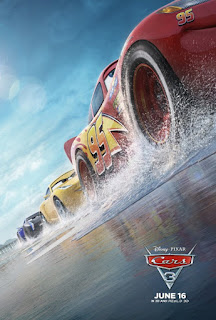 With Pixar’s otherwise speckless track record, the “Cars” films have been like a roller coaster in quality outside of it helping kids get their parents to buy Lightning McQueen backpacks and beach towels. 2006’s “Cars,” though comparatively lesser Pixar, was still a delight conceived with heart, charm and clever detail to set up a world populated by anthropomorphic automobiles. The studio severely dropped the ball in 2011 with the sequel, “Cars 2,” a shiny but manic and phoned-in clunker that wanted to appeal to everyone but ended up appealing to no one, except single-digit viewers, and also tried being an action caper and a James Bond spoof. Any second follow-up could have been out of focus and still lapped the first sequel. Like a slight rebound for this particular series, “Cars 3” plays like a sports movie about the protagonist’s comeback, but it’s also about aging and retirement. That begs the question: are these movies more for adults than kids?

Racing champ Lightning McQueen (voice of Owen Wilson) is reaching his sell-by date, as he finds a competitor in the next generation of racers, primarily sleek but arrogant rookie Jackson Storm (Armie Hammer). After an accident on the track that leaves him defeated and out of commission for four months, Lightning is plucked into a more technologically advanced world and receives a new sponsor, Sterling (Nathan Fillion), who sees big opportunities for him to up his brand. First, he’ll need to get back to training with the help of go-getter Cruz Ramirez (Cristela Alonzo), who’s always dreamed of being a racer herself, and need a little guidance from late mentor Doc Hudson’s legendary coach Smokey (Chris Cooper). Even if Lightning McQueen’s racing days are close to over, maybe he can learn to give someone else a chance and teach Cruz to get her wheels dirty.

In the case of “Cars 3,” the car puns basically write themselves — the film stays on track at first, spins its wheels in the middle, and then finishes off strong in the third act. Taking over for John Lasseter, animation storyboard artist Brian Fee makes his directorial debut and works from a script by Kiel Murray (2006’s “Cars”), Bob Peterson (2009’s “Up”) and Mike Rich (2010’s “Secretariat”) that pretends “Cars 2” never happened, and that’s a smart move. It might never be laugh-out-loud funny, either, but still holds an emotional center. After Lightning McQueen’s impactful, devastatingly rendered crash that does give the proceedings a bittersweet heft, the film itself enters a hole, turning the midsection into a pretty perfunctory comeback story. A detour to a muddy demolition derby and run-in with trashy, hell-on-wheels school bus Miss Fritter (Lea DeLaria) is at least an amusing highlight, but some fine-tuning could have improved the occasional tedium. Making up for it, though, is the script’s adherence to stakes that are favorably personal rather than global. And, then, the finale set at the Florida International Speedway is quite stirring and satisfying, shaking up the formula and the “believe-in-yourself” message a little bit, as well as just delivering a cheer-worthy moment.

Owen Wilson’s Lightning McQueen is welcomed back to lead-role status and his character’s arc is followed closely and completed. Flashbacks to the original “Cars” employ Doc Hudson (the late Paul Newman) and serve Lightning’s evolution in a pivotal and special way. There is also just enough of buck-toothed, aw-shucks tow truck Mater, voiced by Larry the Cable Guy, who can be endearing when used sparingly and not as irritatingly shticky overkill in “Cars 2.” As the engaging newcomer this series needed, stand-up comedian Cristela Alonzo makes Cruz Ramirez adorable, soulful, and worth caring about that it makes one wish the whole film had been about her the whole time; her enthusiasm is as infectious as Ellen DeGeneres’ Dory. Radiator Springs and its lovable populace, including Lightning’s attorney girlfriend Sally (Bonnie Hunt), don’t have a main involvement in the story but are still revisited briefly.

As one expects from any Pixar production, the film is wonderful to look at with the level of care and detail transparent. In fact, there was a moment with an abandoned race track that looked so photorealistic it doesn't even look animated. There isn't much of a new paint job to narrative structure or beats, but pockets of cleverness still reside in lines and visual details. For instance, one character’s line, “Life’s a beach and then you drive,” is a memorable one that will right go over the little ones’ heads. Proof positive that no matter how it stacks up next to the rest of Pixar’s output, even the safe but wistful and sufficiently charming “Cars 3” is more for patient adults than restless tykes. There’s enough heart left, but if Pixar wants to maintain their very high standards for animation, it might be time for Lightning McQueen and even the new gang to just leave well-enough alone.