Cabin Fever: "It Comes at Night" spare and unsettling but promises more than it delivers 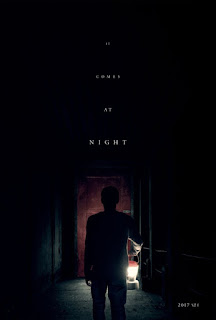 There is something to be said for a spare, minimalistic film that trusts in its audience enough to be able to take its time and not have to spell everything out. The portentously titled “It Comes at Night” is such a film, following up writer-director Trey Edward Shults’ knockout feature debut, 2016’s powerful, stunningly vivid family drama-cum-character study “Krisha.” Painstakingly crafted and often beautifully tense, this post-apocalyptic horror drama and chamber piece is also about a family, but it’s even more fatalistic. It makes you hold your breath a lot but simultaneously promises more than it delivers.

Beyond the woods, there is an unspecified contagion infecting the outside world. Paul (Joel Edgerton), the patriarch of his family, wife Sarah (Carmen Ejogo) and 17-year-old son Travis (Kelvin Harrison Jr.), have set up a safe cabin with all the doors and windows boarded up to avoid contact with infected interlopers. They have recently just lost one of their own in Sarah’s sick, boil-afflicted father (David Pendleton), who had to be quarantined and then put out of his misery outside by Paul himself while Travis watched. And then there were three. The family keeps a routine and follows proper precautions, like always wearing a gas mask outside and never going outside at night. One night, there is an intruder on the other side of the red door—the family’s only way out—in the form of a stranger named Will (Christopher Abbott), who claims to have just stumbled upon the cabin to find food for his family. Playing it safe, Paul ties Will to a tree and bags his head, until he is convinced that the stranger actually has a family and then later helps Will pick up wife Kim (Riley Keough) and son Andrew (Griffin Robert Faulkner). When both families learn to live in the same space and then someone starts feeling ill, their “normative” life comes undone.

Wrapped in a pall of dread, “It Comes at Night” is a bleak, grim film where the paranoia and loss of lives are palpable. The stakes are clear and it actually means something when certain characters don’t survive. The decisions Paul, Sarah and Travis in particular make inform how they have gotten to where they are, and above all, their actions make sense. Though the form of “it” won’t be revealed, the main monster and threat are man and the fear of the unknown, and the red door, which must always remain locked, becomes as ominously forbidden as Room 237 in “The Shining.” Wasting nary a frame and letting everything unfold at a quiet, measured but merciless boil, filmmaker Trey Edward Shults should not be underestimated for what he does with only a little. It is what is not always seen that induces goosebumps, but even Travis' creepy dreams are startlingly blurred with reality and punctuate the languid tension, making his nightmares our nightmares. Thick with close-quarters atmosphere that could be cut with a knife, the film features so much mastery behind the camera, like what all can be done with natural lighting and Drew Daniels’ fluid cinematography; the camera lingering on a disturbing oil painting of the Black Death by Pieter Bruegel the Elder before wandering down a dark hall haunts the mind.

The small cast is comprised of six principle characters and a dog. Joel Edgerton commands the screen with his subtle but bound-to-implode work as Paul, a former history teacher turned extremely cautious survivalist. With the film eventually seen through the eyes of Travis, Kelvin Harrison Jr. (2016's "The Birth of a Nation") is a discovery, navigating some tricky waters for a teenager, from grieving over the loss of his grandfather to feeling fearful and paranoid about the others being welcomed into their cabin to experiencing the start of his own sexual awakening, as he listens to the new couple from an attic crawlspace. As wives Sarah and Kim, Carmen Ejogo and Riley Keough (2016's "American Honey") may receive short shrift by comparison, but they sell every emotional moment. An intense but understated Christopher Abbott (2015’s “James White”) keeps the viewer and Paul guessing as to Will’s actual motivations — is he just protecting his own or does he actually mean harm on Paul and his family?

Constantly tantalizing until the anticlimactic final shot that chills and abandons all hope, the film still might have benefited from more character exploration to deepen the intended gut-punch impact and tragic sense of bereavement. Nevertheless, writer-director Trey Edward Shults pulls off such an eerily plausible concept, free of overexplaining the context of the story, and takes it to unsettling, uncompromising, if somewhat inevitable, degrees. Misrepresented by its marketing campaign as a bump-in-the-night horror film with a mystery at its core and bound to be divisive between critics and casual moviegoers, “It Comes at Night” won’t have mainstream audiences screaming out of the theater, but it could underwhelm viewers who desire a bigger payoff. It will, however, reward those on one side of the fence with patience and an appreciation for ambiguity. The last glimmer of hope that Shults leaves us with at the end of his sophomore effort is that this new and exciting filmmaker is just getting started.