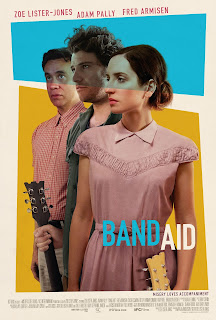 Caustically funny and emotionally true, “Band Aid” is a small gem of an indie dramedy about failure and expressing oneself through those failures. As pedigrees go, it has a solid one that breaks the glass ceiling — co-lead and writer-director-producer Zoe Lister-Jones makes her directorial debut, even though she’s collaborated closely with real-life and filmmaking partner Daryl Wein on 2010’s “Breaking Upwards” and 2012’s “Lola Versus” (their production company is called Mister Lister Films), and she has put together an all-female crew, including her co-producer, cinematographer, costume and production designer, and editor. How exciting, then, that “Band Aid” is also a good film with a smart, intimate, dagger-edged script that is never cookie-cutter and almost never whiny.

Los Angeles married couple Anna (Zoe Lister-Jones) and Ben (Adam Pally) are in a rut, professionally and personally. After a failed book deal, she works as an Uber driver, and he designs logos but rarely gets off the couch from playing video games. They argue over the pettiest matters, like dishes piling up in the sink. At the birthday party of one of their friends’ kids, Anna and Ben pick up musical instruments and start playing around in their happily stoned state. Then they realize they like writing songs about their own fights, so they dig out an old electric guitar and bass from their garage and begin jamming out with oddball neighbor Dave (Fred Armisen), whom they recruit to be their drummer. Anna and Ben sing through their pain and it is cathartic, but is it just a short-lived band-aid for their own personal failures and mutual resentments?

Playing real characters this time rather than sounding-board side pieces or just familiar types, Zoe Lister-Jones—a scream in “Lola Versus”—and Adam Pally—such a delight on TV’s cancelled-too-soon “Happy Endings”—reveal their inherent dramatic chops and create genuine pathos amidst their biting interactions. They’re evenly matched and believable as a contentious couple who no longer see eye to eye but still deeply love one another. Scenes with Fred Armisen as creepy but friendly neighbor Dave, a recovering sex addict with a “lotion in the basket vibe,” spring from a goofier, SNL-born movie when Anna and Ben’s story feels so rooted in honesty, but they are amusingly likable nonetheless. Heard over the phone a few times, Susie Essman comes off like a stereotypical Jewish mother to Ben, but she has one late, great scene that’s smart and insightfully written without coming off preachy. The songs, too, which Lister-Jones co-wrote with Kyle Forester, are actually catchy. Anna and Ben’s barbed bickering has been penned with a tasty pungency—Anna’s analogy to a closed shop for not being in the mood to have sex is cackle-inducing—but there is also a poignancy and an insight that anyone in a relationship will find painfully relatable. In fact, watching "Band Aid" with someone you love and often fight with might be its own sort of couples therapy.