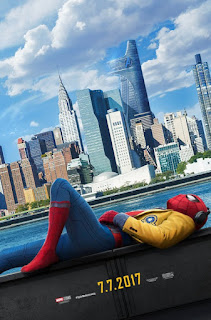 We all know how Peter Parker became a spider-like superhero, so there’s no reason Sony Pictures had to start over from scratch again for the franchise's third go-round. Considering Sony already retooled the character of Spider-Man five years ago with Andrew Garfield in the suit—and 2012’s “The Amazing Spider-Man” was a solid reboot with room for improvement in certain areas that came true in 2014’s “The Amazing Spider-Man 2”—“Spider-Man: Homecoming” should theoretically seem like a cash-grab that nobody asked for, but it’s really quite the opposite. Dispelling all cynicism and proving wrong any negative preconceived notions, writer-director Jon Watts (2015’s “Cop Car”) and his band of screenwriters, Jonathan Goldstein & John Francis Daley (2015’s “Vacation”) and Christopher Ford (2015’s “Cop Car”) and Chris McKenna & Erik Sommers (2017’s “The LEGO Batman Movie”), wisely forgo rehashing Peter Parker’s origin story and let Peter be a kid enjoying his powers while trying to survive high school. In doing so, this fresh start is buoyant, giddy and outright fun but not without consequence.

Following his brief appearance in 2016’s “Captain America: Civil War” as Tony Stark’s new recruit for the Avengers, 21-year-old Tom Holland is the first actor playing Peter Parker to believably resemble a teenager. With a boyish appeal and none of the previous performers’ brooding, he puts his own spin on the often-played character with a goofy, disarmingly quick-witted enthusiasm. This time, Peter is a 15-year-old in his sophomore year of high school in Queens. His identity as the friendly neighborhood spider is a secret to everyone, including his loving Aunt May (Maria Tomei), until he sneaks back into his room in costume to find best friend Ned (Jacob Batalon) to whom he can’t lie. Pretending to have an “internship” with Tony Shark (Robert Downey Jr.), Peter keeps pestering Stark’s driver/bodyguard Happy Hogan (Jon Favreau) to join in with the Avengers for another mission and tries proving himself by protecting his neighborhood. Once Peter as Spider-Man catches a group of thieves in Avengers masks with high-tech weapons robbing an ATM vestibule, he stumbles upon a weapons deal involving construction team leader Adrian Loomes (Michael Keaton), who has been developing black-market weapons from exotic materials in the Avengers’ New York aftermath. On a smaller scale, Peter has a crush on classmate Liz (Laura Harrier), and with the homecoming dance on the horizon, he tries scrounging up the courage to ask her out.

“Spider-Man: Homecoming” opens with a prologue, predating the Marvel studio logo, that sets up Adrian Toomes as a put-upon working family man being confronted by the FBI (led by Tyne Daly) for finding powerful debris in the city wreckage. Though it’s a little too familiar when checking in on Toomes as the resident villain, the film is at its absolute best when being a high school comedy with as many ties to the John Hughes Universe as it does the Marvel Cinematic Universe®. As the sixth feature film to star the web-slinger, this is the first incarnation, if memory serves, to truly revel in Peter Parker’s youthful energy and good humor throughout. Zipping right into an established tone, director Jon Watts takes audiences back to the moment in “Civil War” on the airport tarmac when Peter makes his appearance, albeit from a first-person, web-diary point-of-view. He’s still testing out his new superhuman abilities and showing them off to the heavy-hitters in hopes that he can bring something to the table, and his eagerness is so infectious. Watts keeps the film zippy and light on its feet, but he doesn’t leave something to be desired in terms of stakes. For instance, Peter needs to get to the Academic Decathlon in Washington, D.C., not only to compete but to save his peers from a bomb explosion in an elevator in the Washington Monument.

Supporting Tom Holland is a terrifically diverse cast by his side: newcomer Jacob Batalon is a lovably sweet and hilarious standout as Peter’s inquisitive best friend Ned, who yearns to be his “guy in the chair; Marisa Tomei is dependably wonderful as Aunt May, who catches the eye of every man; Disney star Zendaya steals scenes with her deadpan delivery and comic timing as cynical classmate Michelle; and Robert Downey Jr. still gets his moments without phoning it in as Tony Stark, Peter’s tough-love mentor, as does Jon Favreau as Happy, who’s on Peter’s speed dial. Also, there’s a special appearance by Jennifer Connelly doing the calm and soothing voice of “Karen,” Peter’s Alexa-of-sorts in his suit. Finally, Michael Keaton is shrewd casting as the heavy—credited but never actually called “Vulture”—in that he was the first Batman, post-Adam West, and began a screen comeback in 2014’s “Birdman or (The Unexpected Virtue or Ignorance)” in the role of an actor who once played a superhero. Here, Keaton brings a compelling volatility and even a charitable amount of sympathy as the blue-collar Adrian Toomes rather than being boiled down to one-note evil, and the motivations for that character are far more grounded than the norm’s world-domination scheme.

Helmed with creative passion and a punkish attitude emphasized by the use of The Ramones’ “Blitzkrieg Bop,” “Spider-Man: Homecoming” is much more than a release-date filler tied down to the MCU. It is a genuine crowd-pleaser with a concentration on character and playful, fizzy humor. In this special case, six screenwriters on the script does not spell disaster or create a feeling of too many cooks in the kitchen but actually results in a cohesive vision with no dangling plot threads or unfinished business. There’s also a cute nod to “Ferris Bueller’s Day Off” and a very funny running gag involving gym class educational videos, and the best post-credits “shawarma” of the Marvel movies gets featured here, playing on the notion of waiting through five minutes of credits. With the exception of a few battles between Spidey and Vulture that are a little murky in their staging, the action set-pieces are absolutely thrilling, too, particularly a Staten Island Ferry disaster. If there needs to be any comparison, “Spider-Man: Homecoming” is about on par with Sam Raimi’s “Spider-Man” (2002)—it’s not quite as great, though, as Raimi’s more emotionally mature “Spider-Man 2” in 2004—but the dead-on casting and winning performance of Tom Holland and a cheeky sense of humor lock it in as the latest satisfying iteration of the iconic comic-book character. As much as audiences probably didn’t think they needed another “Spider-Man,” lucky number six swoops in and makes the character refreshingly spry again.