Drag Her to Hell Already: “Ghost House” shrieky but not actually scary 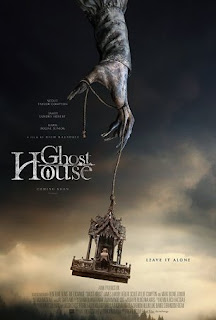 Thailand-set possession chiller “Ghost House” certainly has some reliably spooky imagery—you can't really go wrong with a gnarly-looking crone—and proficient production values for a low-budget VOD offering. Unfortunately, that’s about it. Everything else feels rote and hardly ever scary. Seriously, when will white people vacationing in foreign countries learn that they should never disrespect other cultures? They always end up regretting it.

This time, couple Julie (Scout Taylor-Compton) and Jim (James Landry Hebert) are traveling to Bangkok. After Jim proposes to Julie, they run into British travelers Robert (Russell Geoffrey Banks) and Billy (Rich Lee Gray), who are staying at the same hotel and invite them out. Jim gets to experience a Thai strip club, while Billy stays outside with Julie, and then their next stop is to a cultural graveyard with a miniature shrine. Robert goads Julie into stealing the stone figure, and as Robert runs for his car, Julie sees what she’s up against—an angry Japanese spirit—and is left cursed. Over the course of three days, Jim realizes something just isn’t right with his fiancée and, as he comes to learn from local driver Gogo (Michael S. New) and American expat Reno (Mark Boone Junior), the spirit that has attached itself to her wants Julie’s soul. Don’t you just hate it when that happens?

Director Rich Ragsdale engineers a few startling moments, but his film as a whole is more like a derivative pastiche that steals from the best, primarily Sam Raimi’s deliciously operatic “Drag Me to Hell.” At every turn, the grotesque, witchy-looking spirit haunting Julie keeps turning up in the background and pouncing toward the camera; it's creepy the first couple of times but thereafter becomes so repetitive. The grim moral dilemma, a la “Drag Me to Hell,” that Jim faces to save Julie has no follow-through, either, and just feels like one more missed opportunity.

Learning how to scream her lungs out in Rob Zombie’s two “Halloween” films as Laurie Strode, Scout Taylor-Compton puts herself through the wringer again here as Julie, but she’s better than the material. Without being given the chance to bring much else to her character, she screams, cries and jumps in fear a lot; Taylor Compton’s Julie is merely a pawn at the mercy of a ghoul, and the only ones who can help her are witch doctors. Including an over-the-top finale that is more silly than frightening, “Ghost House” ends up being a cacophony of obligatory jump scares and overcompensatingly shrieky musical stingers. Even the tiniest bit of subtlety might have allowed the film to deliver more satisfying, shiver-inducing chills.