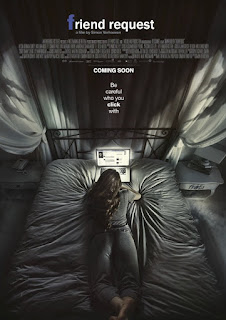 There was potential for another horror film to be made about cyber-bullying and the pitfalls of having the world at our fingertips, but 2015’s “Unfriended” still remains the gold standard apparently. Following the same blueprint as that ingenious little Blumhouse-produced freak-out but not its committed technical gimmick, in which the entire film was shot from a laptop within a real-time Skype chat room, “Friend Request” is like the lame, conventionally shot Lifetime Original knockoff. Released in Europe in 2016 under the title “Unfriend” and now opening wide on over 2,500 screens, this shoddy Johnny-come-lately doesn’t deserve to trend. Writer-director Simon Verhoeven and screenwriters Matthew Ballen & Philip Koch try forging their own path with a witchcraft angle, but they are so beholden to staging a tedious parade of jump scares, none of which work due to being predictably telegraphed and unsparingly used. That “Friend Request” even received a theatrical release is just baffling.

At a California university, popular psychology major Laura Woodson (Alycia Debnam-Carey) seems to have it all. She has a hunky pre-med boyfriend, Tyler (William Moseley), and shares an apartment with her two best friends, feisty blonde Olivia (Brit Morgan) and equally feisty Isabel (Brooke Markham). Laura is such a nice girl on campus that she even gives the time of day to weird goth classmate Marina Mills (Liesl Ahlers), who hides under a black hoodie, and becomes the loner’s first and only friend on Facebook. Once Laura scrolls through her new friend’s posts of darkly artistic but disturbing self-created animation videos and keeps receiving needy messages and video chats from Marina, Laura tries distancing herself and decides not to invite Marina to her birthday dinner with her close-knit group of friends, also including crestfallen, tech-savvy Kobe (Connor Paolo) and Isabel’s boyfriend Gustavo (Sean Marquette). Once pictures of Laura’s dinner party start trickling through on Facebook, Marina immediately feels rejected. The final straw comes when Laura decides to unfriend Marina on Facebook, triggering Marina to hang herself over a circle of fire while filming it on her laptop. Laura receives the suicide video on her Facebook wall, and following Marina’s death (even though the police cannot actually locate her body), she and her friends have their computers commandeered by Marina’s angry ghost (or something). As each friend around Laura dies, their recorded death is posted to her profile, and neither the video nor her profile can be deleted. Not only are the lives of Laura’s closest pals lost, but her 800-plus Facebook friends dwindles to such a precipitous degree that Laura will soon feel as lonely as Marina did.

In an age where so many horror films are knocking it out of the park, it’s movies like “Friend Request” that give the too often spit-upon genre a bad name and make one almost want to give 2002’s unpleasant “FearDotCom” a second chance. Despite this being director Simon Verhoeven’s English-language debut, that doesn’t mean it’s deserving of a pass. Disbelief must certainly be suspended in a story where a spirit controls Internet code and turns it into a code resembling the symbols of dark magic, but this script is just downright silly and never terribly smart in using technology and social media. In fact, “Internet Addiction Disorder” is touched upon a few times to probably sound of the moment, but the intriguing seed that begins in “Friend Request” just lazily devolves into an ineffectual slasher, laden with overbearing fright tactics of supposedly creepy faces emerging from the darkness and popping real close into the frame. The film's idea of building dread is having characters investigate noises down dark hallways and entering even darker rooms, and in spite of its R-rating, constantly cutting away before a death scene. Whereas all of the jolting payoffs are of the cheap, screechy, sped-up variety, much creepier is the imagery of headless dolls, black mirrors, and spiky forests in Marina’s handrawn, Tim Burton-esque video illustrations. This is also one of those films where the cops are useless, disbelieving dolts, and our heroine must undergo her own Nancy Drew investigation, taking a trip to an orphanage and uncovering a derivative backstory.

The poor cast is done few favors, but they all seem to be bringing conviction to their stick-figure characterizations. The appealing Alycia Debnam-Carey (TV’s “Fear the Walking Dead”) offers sympathy and natural charisma as Laura, and for a while, Liesl Ahlers is tragically human before she becomes a punishing ghost in the machine. Brit Morgan lends some spark, too, as spitfire Olivia, but none of Laura’s circle of friends are ever that distinctly drawn enough to be more than walking, talking and eventually screaming profile pictures. So, of course, when they all begin getting knocked off one by one (usually by a swarm of CG wasps), our hearts don’t really go out to them. Then, as the film keeps tabs on how many followers Laura dramatically loses on her friend list as her real friends bite the dust—priorities!—one cannot help but giggle and face-palm at the filmmakers’ confused, heavy-handed attempt at social satire and tragedy. Unlike “Unfriended,” which knowingly indicted its cast of vapid, self-involved kids, this one seems to have no clue how heartless and cynical it’s actually being. Reliant on pandering to the teenybopper crowd who will no doubt be hiding behind their cell phone screens and probably checking their own Facebook, the exceedingly moronic “Friend Request” easily occupies the lowest rung of theatrical horror releases of this or any other year. Friends don't let friends see bad movies like this.