Bourne to Kill: O'Brien solid and Keaton even better in workmanlike "American Assassin" 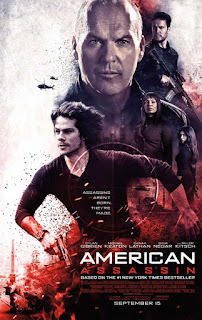 There are so many spy action-thrillers out there that they begin to blend together and fail to bring anything fresh or memorable to stand apart. And, with all the Jason Bournes and Jack Ryans of the world coming before the late Vince Flynn’s best-selling 16-book series centering around undercover CIA counter-terrorism agent Mitch Rapp, “American Assassin” was bound to feel like another boilerplate spy action-thriller, even with its seemingly important title. Director Michael Cuesta (2014’s “Kill the Messenger”) doesn’t do anything particularly novel with the source material, especially with a formulaic script by screenwriters Stephen Schiff (TV’s “The Americans”), Michael Finch (2015’s “Hitman: Agent 47”) and Edward Zwick & Marshall Herskovitz (2016’s “Jack Reacher: Never Go Back”), but every now and then, he breaks away from a workmanlike competence and stages several bloody, brutally felt and cohesively choreographed hand-to-hand combat scenes that one would prefer to watch in a short demo reel rather than a 111-minute feature film.

Not even two minutes after Mitch Rapp (Dylan O’Brien) proposes to bikini-clad girlfriend Katrina (Charlotte Vega) on their Spanish beach vacation do Islamic terrorists open fire on the entire resort, killing Katrina and wounding Mitch. Eighteen months later, Mitch has grown a beard, developed a self-training regimen before carrying out his revenge plan, and infiltrated the cell of his girlfriend’s murderers. When he makes his move on the ISIS-like extremists and nearly gets killed, CIA black ops intervene and do the dirty work for Mitch. Enter CIA Deputy Director Irene Kennedy (Sanaa Lathan), who has been monitoring Mitch for a while, believes his skills to be off-the-charts, and recruits him for elite training with former U.S. Navy SEAL and Cold War vet Stan Hurley (Michael Keaton). Initially, the no-nonsense Hurley doesn’t like Mitch’s attitude, but as he proves his mettle and distinguishes himself from the other recruits, Mitch goes on his first field mission with Hurley and Turkish agent Annika (Shiva Negar) in Rome to recover plutonium that’s being used to build a nuclear warhead by an operative known as Ghost (Taylor Kitsch). This will be the true test to see if Mitch can actually follow orders.

As an emotion-driven revenge story that hinges on Hurley’s pearl of wisdom to Mitch—“never, ever let it get personal!”—“American Assassin” works up enough investment. The opening vacation scene that immediately shifts into real-world horror is rattling and visceral, and the grueling training exercises that Hurley puts Mitch and other young men through are exciting to watch, including a virtual-reality laser tag with painful results and a pseudo-mission in a mock IKEA set. Mitch Rapp is not military-trained but self-taught and as agile as Jason Bourne; he is an everyman driven by personal trauma. However, the film seems to do away with that idea, rendering it half-baked and opting to be another standard-issue globetrotting thriller that checks all the boxes. The geographical location changes in almost every scene. There is the anticipated unveiling of the identity of a mole. And then, not exactly by this genre’s playbook per se, the film throws in a gratuitous torture scene where finger nails get extracted in gruesome close-up and a big, bombastic finale with disaster-movie CGI that would be more fitting in Roland Emmerich’s “2012.”

Replacing Chris Hemsworth in the role of Mitch Rapp, Dylan O’Brien wouldn’t seem like one’s first choice—and he wasn’t—but he is more than capable in breaking away from YA territory (MTV’s “Teen Wolf” and the “Maze Runner” series) and being molded into the next stoic action star. When the script actually gives him the chance, he believably pulls off the arc of being an emotionally numbed soul turned maverick killing machine, but even better, O’Brien sells the wiry physicality and proves that his pre-production training paid off. As Mitch’s tough-as-nails handler Stan Hurley, Michael Keaton elevates a stock Obi-Wan Kenobi role with plenty of watchable hardassery and that madman glint in his eye, and then he later brings a volatile, Beetlejuice-like eccentricity to one key scene where he has a mouthful of blood (you’ll definitely know it when you see it). On the other hand, the eye-catching Shiva Negar, as undercover agent Annika, doesn’t always have much more to do than look glamorous and then eventually pick up a gun when the time calls for it. Sanaa Lathan gets handed all of the most laughably self-serious dialogue that anybody would have a tough time selling, but it’s a relief when she actually sparks an intentionally amusing one-liner in her last scene. And, lastly, Taylor Kitsch does just fine with what he’s given, snarling with menace whenever he can, but his Ghost is really just another evil, chaos-obsessed psychopath who may as well have “Daddy Issues” tattooed on his forehead.

“We kill people who need to be killed,” is the rah-rah mentality behind “American Assassin,” but nobody will be buying a ticket to a violent espionage thriller expecting to find subtle politicking and tasteful moralizing. If Mitch Rapp does get the franchise treatment, it would behoove of Lionsgate Films to figure out what might make Vince Flynn’s protagonist stand out from the already-crowded pack, and in doing so, handle the emotional component more consistently. From what one gets so far, “American Assassin” remains a largely forgettable, if adequately entertaining, action picture that gets the job done but never achieves more than that.