Get Out!: Surreal, incendiary "mother!" unlike anything else out there 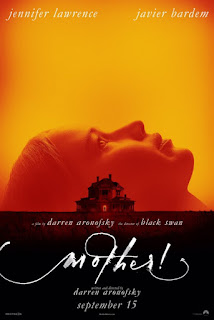 Daring in ways a lot of modern filmmakers would not even try in fear of failing, writer-director Darren Aronofsky is one of cinema’s most courageous cinematic artists who really swings for the fences and never lets his audience know where he’s taking them. His latest offering may be the last word in his thoughtful, challenging auteur sensibilities. Shrouded in cagey mystery, “mother!” is, no contest, the least commercially viable and most polarizing studio film of the year, and amen to that. Paramount Pictures has allowed Aronofsky to make precisely the movie he intended to make, and he pushes things all the way to the point that mainstream audiences aren’t going to know what hit them. It is not quite the “Rosemary’s Baby”-like horror film that it’s being sold as in the violin-heavy, brilliantly cut trailers—and one of the very similarly designed one-sheets—but it is its own fascinating creation that impresses with a singular vision and staggeringly fearless nerve. Though it's important to keep an open mind with the final product on the screen, many will feel alienated, finding this experimental piece of work to be esoteric, pretentious self-therapy for the filmmaker, and others will be infuriated that it deceives in not being the kind of film advertised (perhaps another “It Comes at Night” situation). A cinematic Rorschach Test, anxiety attack, and hallucinatory nightmare unlike anything else, “mother!” is a tour de force that is hard to process after just one sitting but even harder to ignore and worthy of discussion for years to come.

In “mother!,” nobody has an actual name and the single setting is just as much of a living, breathing and bleeding character. “Mother,” a not-yet-pregnant young woman (Jennifer Lawrence), and “Him," her older husband and a celebrated poet with writer’s block, have formed a paradise together in an isolated farmhouse in a painterly clearing. She spends her days restoring the house by herself and making meals for them, he tries working to publish his latest masterpiece, and they clearly love one another. One night, there is a knock at a door, and it’s a strange Man (Ed Harris) who claims to be an orthopedic doctor searching for a bed and breakfast and keeps having coughing fits. Against Mother’s cautious opinion, Him opens up their house to the Man and gives him a room. The next morning, the stranger’s wife (Michelle Pfeiffer) knocks at the door. This other couple make themselves at home and can’t keep their hands off each other. And then the Man and Woman’s two adult sons (brothers Brian and Domhnall Gleeson) show up. And then more uninvited guests keep coming. And then things turn violent and anarchic.

Because it is so difficult to beat around the bush about what is going on underneath the surface of “mother!,” it is recommended that readers who haven’t yet seen the film should stop right here and return later once they have. As all forms of art should be, there doesn’t seem to be one interpretation or reading, and this one in particular will be in high demand of analysis essays and deeper consideration. Beginning as a quiet, intimate chamber piece (apart from the blazing opening sequence that foreshadows what one is in for), the film gradually rips apart the married couple’s tranquil existence with growing tension and erupts into such an intensely surreal, powerfully visceral fever dream that confounds the viewer and Mother alike on which way is up and which way is down. Like a pot of boiling water with the auteur’s metaphorical ambitions and ample suggestion slowly bubbling to the surface, the proceedings almost play out like a straight-faced version of a door-slamming (and door-knocking) farce, until the reveal of a human heart in a toilet and a blood spot in the floor board that just won’t go away. It is all an allegory for fame and adoration, artists and muses, the life of being a mother who feels that she has to do everything, mankind’s assault on Mother Earth, and the cycle of creation and death. In some respects, this is also of a piece with Darren Aronofsky’s oeuvre, whether it be the themes of obsession in 1998’s “Pi" and 2010’s “Black Swan,” or his foray into the Bible, like his 2014 Noah’s Ark retelling "Noah."

If acting is about taking chances and going out of one’s comfort zone, Jennifer Lawrence does just that and more in taking on the role of Mother, and this is an actress whose versatility knows no bounds. In her bravest and most demanding turn to date, she gives her all and throws herself into the material, while being put through the extreme wringer. One could probably argue that Mother is solely a vulnerable innocent, but Lawrence is actually the film's emotional guide who also brings ferocity and backbone in the final stretch, even as her voice is constantly ignored. Everything unfolds through her eyes and everything that happens around her is like a nightmare from which she can not awaken. Cinematographer Matthew Libatique (the director’s loyal collaborator) creates such an invasive, boldly showy dance of the camera, shooting handheld on 16mm film and intricately choreographing a series of master shots through the confines of one house, and rarely strays from Mother, as a lot of the coverage is on her face, from behind her, and over her shoulder. As Him, Javier Bardem conveys a tricky balance between loving warmth for his wife and detachment with chilling fits of rage in between. The rest of the cast is all in—including a certain friendly face who won’t be named here and is a surprise to see—but of the hangers-on who are already seen in the trailers, Ed Harris is effectively suspect and Michelle Pfeiffer is a deliciously wicked, sexy, tipsy storm of unpredictability and intimidation. Any film could always use more of Pfeiffer's presence, but she makes quite a lasting imprint with her sly, darkly funny facial expressions in which she stumbles around a house that isn't hers and asks Mother forward questions about her sex life and whether or not she wants to have children of her own.

Enticingly strange, rattling, unshakable, and even punishing, “mother!” flips the bird to convention and refuses to be pinned down to one genre box. One is better off just surrendering to Darren Aronofsky playing the viewer like a puppet and then making up his or her own mind afterwards. In command of every frame, Aronofsky keeps tightening the vice, sporting an exquisitely unsettling sound design and throwing in a few jump scares to keep the audience (and Mother) uneasy. When the film hits a startling, nightmarishly incendiary crescendo that quite literally throws in the kitchen sink at one point, it never lets up and will not be easily forgotten. Subtlety flies out the window, and yet, it all appears calculated as a part of Aronofsky's master design and what he wants to say with a giant exclamation point. He wants to provoke, wreck our nervous systems, and give the gobsmacked viewer plenty to mull over, and all three goals are met. While reactions to this unsafe, studio-produced art film with household names will undoubtedly be split down the middle on what works and what does not work, and what it all means, there is always a place reserved for movies that trigger an emotional response, shake you up and change your mood, and leave so much room for debate. One thing we can all agree on, though: “mother!” is something else!