Reviving the '90s: Watered-down "Flatliners" remake ends up in purgatory 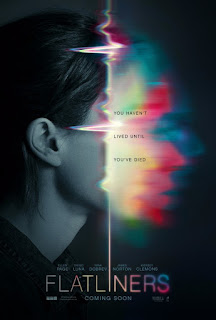 Some lines should never be crossed, but a remake of 1990’s brainy, chilling, atmospheric sci-fi horror thriller “Flatliners" wasn’t really on a “Do Not Touch” list. It's not like it was "Halloween" or "A Nightmare on Elm Street," justified classics that were too influential to be improved upon. Director Joel Schumacher's cult hit was best known for its "Frankenstein"-like concept and assembling a post-Brat Pack ensemble, including a younger Kiefer Sutherland, Julia Roberts, Kevin Bacon, William Baldwin and Oliver Platt, so there was enough creative leeway to revisit this material and re-introduce it to a new generation. Twenty-seven years later with another eclectic, talented cast playing the five irresponsible med students, director Niels Arden Oplev (he of the Swedish “The Girl With the Dragon Tattoo”) and screenwriter Ben Ripley (2011's "Source Code") dare to explore life after death with a little medical knowledge and equipment. Trouble is, this 2017 edition of “Flatliners” does nothing new or remarkable with that corker of a premise, the characters become less interesting, and the horror moments are generic and too dead on arrival to raise a viewer’s pulse. It's just unnecessary.

Saddled with guilt after a car accident that took the life of her younger sister nine years ago, doctor-in-training Courtney (Ellen Page) wants to know what happens after death. When she invites two of her peers, trust-fund playboy Jamie (James Norton) and studious, overly pressured Sophia (Kiersey Clemons), after midnight to an unused room in the basement of Trinity Emmanuel Hospital, Courtney explains the extracurricular experiment she has in mind and asks them to stop her heart, if only for a couple of minutes. They are hesitant, of course, but Courtney gives them the protocol and goes under. Having trouble reviving Courtney, Sophia panics and calls in expert Ray (Diego Luna), but once they know the experiment works, highly competitive Marlo (Nina Dobrev) wants in, too, especially when the female guinea pig comes back energized and even more skilled than before. Pretty soon, all of them (save for the sensible Ray) start playing with death like it’s a trending drug that makes them euphoric, care-free and impulsive, but as they regretfully come to realize, the side effects are supernatural and potentially fatal. Have these students brought something back with them from the other side?

In this “contemporary reimagining”—if that’s what we’re going with—the fascinating, possibility-rich core concept of the first “Flatliners” remains the same, but the characters are given different names, the men are minorities this time (Julia Roberts was the lone woman in the original film), and the characters’ traumatic sins have been updated, though not all for the better. Like Courtney holding herself accountable for her sister's death, Jamie, Sophia and Marlo each have their own secrets that will come to haunt them besides. Sophia's most haunting sin is humiliating a high school classmate with a higher GPA than her, which doesn't exactly compare to the impact of being responsible for the death of a sibling, but one can rationalize that it would be silly if every character had the same level of skeletons in their closet. Ray is initially set up as the voice of reason, being completely against the flatlining experiment and ends up being the only one who doesn't experience death, but his change of heart due to him having feelings for Marlo doesn’t really convince. The early scenes with these five characters coming together hold promise for the rest of the film, but after Courtney is the first to flatline and the nightmarish hallucinations start trickling in, the film actually grows less effective. Whether or not any of these characters will be resuscitated in time curiously lacks urgency, individual moments in an elevator and a morgue peter out before things have the chance to get creepy, and none of the scare scenes are frightening or earned. When an audience remains unaffected and predicts each startling beat every time, you know something is off.

With little help from the shallow, pseudo-intelligent script, the cast still dutifully pulls its weight, particularly Ellen Page as reckless mastermind Courtney, whose guilt comes closest to bringing any pathos. James Norton (doing his best cocky James Spader impression), Kiersey Clemons, Nina Dobrev, and Diego Luna also sell most of their respective moments as best as they can. In what should have added a sense of winking fun, there is also a very small role for original “flatliner” Kiefer Sutherland, here not playing an older Nelson Wright but a tough, white-haired instructor to the med students, and unfortunately, the part that called him away from the set of TV’s “Designated Survival” for maybe a day shoot is a total waste.

Indicative of the polished but otherwise unimaginative production as a whole, cinematographer Eric Kress even tries aping the stylish, phantasmal camera movements from Joel Schumacher’s film with swooping crane shots over buildings and through a cathedral glass during one character’s “flatlining.” Whereas Schumacher allowed his film to go crazy and overwrought with color filters and fog machines, director Niels Arden Oplev plays it safe and then leads to a falsely moralistic resolution, letting his characters off the hook way too easily after they must right their wrongs and take full responsibility. In the cycle of Hollywood repeating the past again and again, 2017’s “Flatliners” is watered-down and uninspired but hardly the worst of the lot. It does, however, struggle to find a reason to exist in the world and ends up in purgatory.