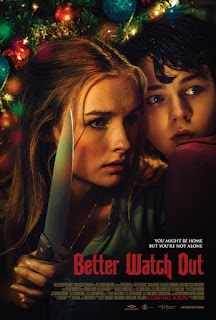 The holidays come early this year for spirited horror fans with “Better Watch Out" (formerly titled "Safe Neighborhood" during its festival run), an impishly fun, cleverly imagined Christmastime horror-comedy that turns the routine home-invasion formula inside out. Writer-director Chris Peckover (2010’s “Undocumented”) is unafraid to turn the wholesome backdrop of a Christmas-decorated suburban home into a house of death traps and squirt a little red crimson on snow. With unexpectedly wicked glee and a sense of humor as black as coal, “Better Watch Out” doesn’t always play nice, but it plays fair with its audience and its characters, and that’s part of what makes its thrillingly unpredictable plot turn as foolproof as a shotgun to the stomach. This is sure to make one re-evaluate Kevin McCallister's psyche and his sadistic torture games with Harry and Marv.

As his parents (Virginia Madsen, Patrick Warburton) prepare for a night out at a Christmas party and leave him pizza money, 12-year-old Luke Lerner (Levi Miller) tells best friend Garrett (Ed Oxenbould) he cannot wait to stay in with his pretty 17-year-old babysitter, Ashley (Olivia DeJonge). He has harbored a long-time crush, and now that she’s moving to Pittsburgh for college, he decides to finally make a move. Unfortunately, his clumsy attempts to hold her hand while watching a horror movie don’t work on the mature young lady who keeps receiving calls from her boyfriend (Aleks Mikic) and are further interrupted when an uninvited guest lurks outside, armed and dangerous. Ashley takes action, making sure her charge is safe, but by that time, the killers might already be in the house. And that is all the plot one should know.

One should avoid the trailer of “Better Watch Out,” even though the way it is cut together doesn’t ruin all of the surprises, but this is certainly a film that rewards audiences who go in knowing as little as possible. The first half spends time setting up Luke’s puppy love toward the cool but responsible Ashley and planting little details like Luke’s sleepwalking habits and Ashley’s arachnophobia. Then, around the half-hour mark, writer-director Chris Peckover and co-writer Zack Kahn change gears with one deviously twisted curveball and laugh in our faces, completely upending expectations and then strangling those expectations with twinkle lights. As the carnage gets turned up, director Peckover knows exactly what to show and what to cut away from.

Australian star-in-the-making Olivia DeJonge is engaging, bright, relatable, resourceful and tough as Ashley, and she and fellow Aussie Ed Oxenbould (quite the hoot as bespectacled pal Garrett who wastes no time rummaging through Luke’s parents’ medicine cabinet for OxyContin and offering Luke his brother’s weed) work together again after playing siblings in M. Night Shyamalan’s “The Visit.” Directed to act precocious with a false swagger that still intentionally rings boyish, the angelic-faced, voice-cracking Levi Miller (also Australian) toys with his role as “The Boy Who Wouldn’t Grow Up” in 2015’s “Pan” and commands attention as Luke. Without getting into the weeds about his character, it is alarming how much Miller is up to the task, selling every line and difficult act that's asked of a 15-year-old actor with only one other major film under his belt. Rounding out the cast, Patrick Warburton and Virginia Madsen are hilariously acerbic in their five minutes’ worth of screen time.

If the home invaders ended up in body bags and not with a measly blowtorch to the head or a falling iron to the face, "Better Watch Out" might resemble 1990's "Home Alone" with a tinge of Joe Dante's playful malevolence. In fact, that John Hughes-scripted holiday staple gets name-checked and has one of its booby traps debunked by being put to the gruesome test. Though shot on a Fox Studios soundstage in the dead of summer in Sydney, Australia (except for the opening scenes’ snowy exterior shots being filmed in the U.S.), the Christmas setting is convincingly presented and, along with the use of Brenda Lee’s “Christmas Will Be Just Another Lonely Day,” makes for a cheerful counterpoint to all of the bloody violence that ensues. Go in cold and “Better Watch Out” offers a tautly paced, delightfully nasty treat for those who like their horror movies darkly funny and their Yuletide movies with a body count.