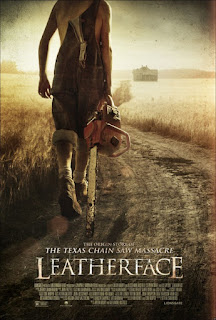 43 years since the late Tobe Hooper’s 1974 masterfully raw “The Texas Chain Saw Massacre” was rightfully placed on the pedestal of the horror genre, six more films have continued this franchise, all to varying degrees of success. There was the wacky sequel, two rehashes, a remake, a prequel to the remake, and a sequel that returned to the roots of the first film. Now, as a chance to really return to the roots of Hooper's original, "Leatherface" is billed as a prequel and the origin story of Jedidiah “Jed" Sawyer and how he was born into a sick, depraved Texas family of killers. The idea of exploring the genesis of a boy and his chainsaw could have germinated into a worthwhile, compelling companion piece, but French directors Alexandre Bustillo and Julien Maury (who found their calling in their genre of choice with 2007 Grand Guignol “Inside”) and screenwriter Seth M. Sherwood undercut everything that was so frightening and unknown about Leatherface, kind of like the first act of Rob Zombie’s 2007 re-imagining of “Halloween.” Even those who were actually itching to see the chainsaw-loving madman in his formative years will go home knowing as much about Jed as they did before the rote, half-hearted "Leatherface."

On his tenth birthday, Texas backwoods boy Jed Sawyer (Boris Kabakchief) receives his first chainsaw that he gets to use on an interloper, egged on by his pig-farm family’s matriarch, Verna (Lili Taylor). He disappoints his mama, not having the guts to do the job, so Grandpa finishes the job for him. Then, in 1955, Jed lures a young woman to a barn, where his siblings trap and brutally kill her. She happens to be the daughter of local Texas Ranger Hal Hartman (Stephen Dorff), who doesn’t have concrete evidence to link the Sawyer boys to the crime but vows for retribution. Ten years later, slow, hulking Bud (Sam Coleman) and more-controlled Jackson Sawyer (Sam Strike), one of whom is actually named Jed, have been shipped off to a mental institution for extremely mishaved youths where all of the patients have had their names changed for protection. When Verna arrives at the asylum to visit her babies with a lawyer in tow, she is rejected, forcing her to unleash a riot that allows all of the patients to break free. This leaves sociopathic couple Ike (James Bloor) and Clarice (Jessica Madsen), as well as Bud, Jackson, and sympathetic nurse Lizzy (Vanessa Grasse) as a hostage on the couple’s part, to go on the run from the law, but Hal Hartman (Stephen Dorff) is on their trail and wants to set things right, or so he sees as right.

Some cinematic monsters should not be demystified and just remain as they were meant to be—pure embodiments of evil—but the potential to humanize them is always there if executed well. Sure, Leatherface is a byproduct of a toxic family of homicidal maniacs who dine on their victims for family dinners, but that was already conveyed in the films before “Leatherface.” Treating the narrative as a mystery is the biggest miscalculation, using one of the Sawyer boys as an obvious red herring, and actually does a disservice to the film’s aims; the answer to who will become the flesh-masked, chainsaw-wielding Leatherface of the title—is it Bud or is it Jackson?—is already made clear in the film’s first scene at Jed’s birthday party. There is, however, the tiniest bit of interest in seeing how it will get there, but too much time is wasted on characters who are even less likable than Leatherface.

Lili Taylor seems to approach the role of Verna Sawyer with more dimension than the script affords her, playing a denial-riddled mother who will do anything for her children, while Stephen Dorff plays police officer Hal Hartman as a strict archetype, a corrupt pig who’s obsessed with justice but crossing all lines of the law and more than a little unhinged himself. The only decent human being in the film is Vanessa Grasse’s Lizzy, who’s charmed by Jackson on her first day of rounds at the hospital, but she makes for a pretty bland heroine who is never quite feisty enough; when she has the chance to run, she doesn’t take it. Who are we supposed to root for then?

Part on-the-lam road movie à la “The Devil’s Rejects” and part revenge thriller before culminating in Leatherface reuniting with his family and his favorite tool, “Leatherface” lacks the insight or psychological examination to even warrant being made about the making of a murderer. The on-location shooting in Bulgaria is at least convincingly disguised as dusty, gritty Texas and there's shrewd use of Patti LaSalle's soothing 1960 ditty "It's Over" over the last couple of frames, but all that’s really left to take away is a lot of splattery kills and a twisted family-comes-first message. Directors Bustillo and Maury squander no opportunity to rub the viewer's nose in the ugliness and unpleasantness on screen to the point that their film feels gratuitous in every way, from not only its mere existence but also its shocks, including a sex scene with a corpse and three characters rather efficiently hiding out inside a dead, maggot-infected animal carcass. If there’s anything more to add, it's that everyone seems to have their own opinion on which installment is the worst after “The Texas Chain Saw Massacre,” and while it is still a notch above the campy one that had no help in making stars out of Renée Zellweger and Matthew McConaughey, “Leatherface” counts as the second most worthless addition to the series.