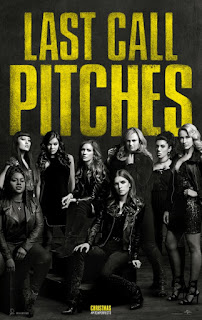 2012’s high-energy, sparklingly written and likably performed “Pitch Perfect” began life as a crowd-pleasing sleeper that three years later spawned 2015’s “Pitch Perfect 2,” an encore which may have been more of the same but was still eager to please and funnier than what usually counts for a studio comedy, let alone a sequel. Those who weren’t charmed by the first two movies (and who are these people, exactly?) can now thank their combined box-office successes for a trilogy. There weren’t exactly any loose ends to warrant a third, but as a last hurrah, “Pitch Perfect 3” sticks to its niche and will most likely win over its built-in audience anyway. Diminishing returns or not, this second sequel still delivers on the infectiously peppy qualities of the first two, breezing along at a zippy 93 minutes with the cast bringing charisma, a few catchy earworms and just enough acerbic zingers that work. There are worse excuses to see characters we liked the previous two times doing what they do best.

A few years into adulthood after graduating Barden University, Beca (Anna Kendrick) quits her music producing job when the talent she’s working with leaves a lot to be desired. With former fellow Bellas and roommates Fat Amy (Rebel Wilson) and Chloe (Brittany Snow), they get invited to reunite with the rest of their a capella group by Bardem junior and new Bella leader Emily (Hailee Steinfeld), who has taken a break from writing original songs. As it turns out, the former Bellas weren't invited to perform but to watch Emily and the new girls at the Brooklyn Aquarium. Afterwards, as it seems all of the former Bellas are having a tough go in the workforce and miss their close-knit group, Aubrey (Anna Camp) suggests they perform one last time on a four-day United Service Organizations performance tour of Europe in support of the troops if she can get them invited through her military father. Since they all have free time, the group heads to Europe, but once getting there and sizing up the competition, the Bellas realize the other bands actually use instruments and that only one of them will be given the chance to be the opening act for DJ Khaled. If this is going to be their last hurrah before going their separate ways, they’ll have to go all out with a bang.

Considering this is the allegedly last “Pitch Perfect” and the shortest of the three movies, director Trish Sie (2014’s “Step Up All In”), returning writer Kay Cannon and co-writer Mike White seem a little desperate to pad the running time. Instead of dealing with romantic entanglements with Beca and Skylar Astin’s Jesse, Emily and Ben Platt’s Benji, and even Amy and Adam DeVine’s Bumper, all of the Treblemakers are written out with a few lines of dialogue establishing that Jesse and Bumper have moved on (and even one of the Bellas, Alexis Knapp’s sex-obsessed Stacie, is out after the first ten minutes because she’s eight months pregnant). With those elements excised, the script throws in Beca being spotted on the USO tour by music exec Theo (Guy Burnet), who wants her to open for DJ Khaled without the Bellas. The biggest conflict comes in the form of Fat Amy’s estranged swindler of a father (John Lithgow), who shows up to collect her inheritance in the Cayman Islands. With that inclusion, though, Lithgow gets to briefly sing in an Aussie accent and Rebel Wilson later gets to prove her kick-ass physical abilities.

As much of a thin blatant money grab as it is and not having more story to tell, “Pitch Perfect 3” is consistently hard to dislike. For better or for worse, the script hits a lot of the same notes, and the characters remain in their individual lanes (for instance, Aubrey still recites her tough-love “Like my dad always says…” proverbs). Director Trish Sie and co-writers Kay Cannon and Mike White do bring a blown-up, “let’s-just-go-for-it” sensibility to the knowingly preposterous hostage crisis situation the Bellas find themselves in and an explosion that sends them jumping off a yacht, complete with Fat Amy unleashing “Atomic Blonde”-like moves to a bunch of henchmen beforehand. Though this sounds like shark-jumping, it works more than not. What doesn’t quite work is the use of catty Greek chorus commentators John and Gail, who tail the Bellas across the country as footage for their “dacamentary.” Through no fault of John Michael Higgins and Elizabeth Banks, who don’t have to do much to generate easy laughs, the use of them feels tacked-on and beyond contrived this time.

If the freshness has faded, “Pitch Perfect 3” is still never without its charms. The always-appealing Anna Kendrick still gets several deadpan asides, and the way the petite star uses her small size to her advantage in the hostage crisis situation to save her Bellas is adorable. Rebel Wilson (at one point, wearing a “Make America Fat Again” hat) is never not an explosion of brassy energy at Fat Amy. Though the mysteriously quiet Lilly (Hana Mae Lee) is given fewer amusingly off-kilter things to say at a whisper, there is an out-there revelation that pays off that background character and earns a big laugh. There’s also another self-aware poke at interchangeable duo Jessica (Kelley Jakle) and Ashley (Shelley Regner), one of whom actually gets two lines of dialogue this time. The musical performances are still highlights, though not as memorable as before; their rendition of Sia’s “Cheap Thrills” on stage and Britney Spears’ “Toxic” on a yacht are the only real standouts. It also wouldn’t be a “Pitch Perfect” movie without a riff-off, and this one includes the other groups invited on the USO tour getting in on the action, including Evermoist, a sultry four-woman band made up of Calamity (Ruby Rose), Serenity (Andy Allo), Charity (Venzella Joy Williams) and Veracity (Hannah Fairlight). Luckily, the film sends out audiences on a relatively high note with a performance of George Michael’s “Freedom! '90” that could be the Bellas’ last, and that notion of finality is noticeable on the cast members’ faces. By this point, it’s been fun watching the Bellas create music with their mouths, but hopefully everyone can agree that they had a good run and should move on now. As an aca-pleasing swan song for the Bellas, "Pitch Perfect 3" will surely please and entertain their fans.