Re-Heat: Familiar, long-winded "Den of Thieves" at least gets the job done 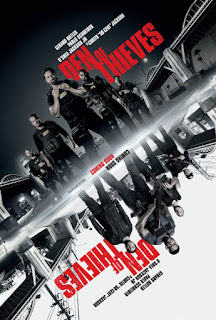 “London Has Fallen” screenwriter Christian Gudegast, making his directorial debut, and co-writer Paul Scheuring (2003’s “A Man Apart”) have clearly seen Michael Mann’s “Heat” and every other trail-blazing crime saga that has come before the morally murky “Den of Thieves,” where the cops are as shady (and tatted) as the criminals. It’s lukewarm, if you will, and only slightly less generic than it would seem without ever reinventing the wheel, but as a junky genre picture released during January’s notorious dumping ground, it gets the job done decently enough.

Ex-military ex-con Merrimen (Pablo Schreiber) leads a score outside a Gardena donut shop in Los Angeles to steal an armored car from cops with his crew of Outlaws, Levi Enson (50 Cent), Bosco (Evan Jones), Mack (Cooper Andrews), and driver Donnie (O’Shea Jackson Jr.), but their robbery ends in the killing of a few cops. Heavy-drinking LAPD lieutenant Nick “Big Nick” O’Brien (Gerard Butler) and his major crimes squad, “The Regulators”—among them, Murph (Brian Van Holt), ‘Borrachio’ (Maurice Compte), ’Z’ (Kaiwi Lyman), and Gus (Mo McRae)—are already on to them by picking up on calling cards from previous unsolved heists. When bartender Donnie, the newest inductee of the Outlaws, is tazed by Nick, he wakes up to being interrogated by the cops, and while finally confessing to playing a role in the crime, Donnie withholds information on Merrimen’s next move: make off with $30 million in out-of-circulation $100 bills before they get shredded at the Federal Reserve Bank.

Putting on airs about itself from the beginning, “Den of Thieves” opens with a statistic about bank robberies occurring every 48 hours in L.A. — the bank robbery capital of the world. From there, the script by Christian Gudegast and Paul Scheuring wants to blur the line between the good guys and the bad guys, the cops and the robbers, as both Nick and Merrimen—which connotes what Robin Hood and his Merry Men stood for—are each other’s counterpart dealing in corruption. Full of testosterone, bravado and macho posturing, including a scene of target practice between Nick and Merrimen that’s the equivalent of measuring dicks, the film wants to have something on its mind about the duality of man, but that idea never quite lands. Scenes with Nick dealing with his fed-up wife, Deb (Dawn Olivieri), walking out on him and taking their two daughters, attempt to humanize and flesh him out but just eat up time. Then, in an intentionally awkward scene, Nick walks into a dinner party uninvited to his wife’s sister’s house and embarrasses her by signing the divorce papers, while stealing a few sips of wine and then hugging his wife’s date before he’s forced to leave. A little ambition is commendable, but the film gets greedy with a final twist that tries for the level of “The Usual Suspects"; it should recontextualize everything that came before, but it just feels needlessly tacked-on.

When the viewer first meets “Big Nick,” Gerard Butler chomps on a sprinkled donut off the ground of the big score’s crime scene and thereafter masticates the scenery throughout. Grizzled and not asked to be liked, Butler tears into his wild-card role of reckless, belligerent dirty cop Nick O’Brien, who remains contemptible for most of the film, and puts in one of his more compelling, immensely watchable performances to date. By contrast, Pablo Schreiber (who has built up a TV career with Netflix’s “Orange Is the New Black” and Starz’s “American Gods”) is more understated yet still intense and hard-edged as Merrimen, carrying himself with a calm swagger. 50 Cent blends in with Merrimen’s crew as Levi without calling attention to his stardom but surprisingly blends into the background for much of the film; he has one vaguely amusing but out-of-place scene where he takes his daughter’s prom date aside, right into his garage/gym with his bodybuilding friends to get the teenage boy to agree to a curfew. It’s the magnetic O’Shea Jackson Jr. (2017’s “Ingrid Goes West”) who overshadows the two co-leads and becomes the middle man as bartender-turned-robbery-driver-turned-police-informant Donnie, coming off as the most interesting and appealing character.

As thoroughly familiar and long-winded as it is, “Den of Thieves” is recommendable for the solid performances and the slick style that Christian Gudegast brings to the table, along with an edgy score by Cliff Martinez. Even if the dramatic stakes don’t amount to much, the elaborate heist on the Federal Reserve Bank of Los Angeles is cleverly staged and planned, using Donnie as a Chinese food delivery man to distract from the main score, and there’s a tense third-act shoot-out in bumper-to-bumper traffic that culminates in a stand-off between our main pro- and antagonists. Shaved down to ninety minutes or just two hours, the film might have felt less repetitive in getting where it’s inevitably going, but it is fairly entertaining in the moment as standard pulpy thrillers go.