Swamp Thing: "Victor Crowley" delivers all the humor and red stuff of the series 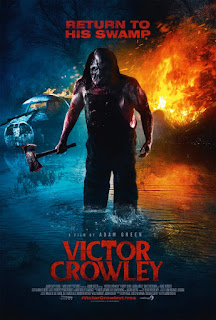 Writer-director Adam Green has created such a formidable slasher-movie boogeyman in the deformed, hatchet-wielding Victor Crowley that he seems to be on a roll to make as many “Hatchet” sequels as there were for Michael Myers, Jason Voorhees and Freddy Krueger. 2007 wasn’t that long ago, but before spawning later installments, “Hatchet” was a fresh and purely fun throwback to the slasher flicks of the 1980s, where heads were ripped from their bodies and blood squirted like a hot spring of crimson in the name of shocking laughs. Having a modern cult classic on his hands, Green went on to direct 2010’s lesser “Hatchet II” and chose to write but not direct 2013’s more-on-par-with-the-original “Hatchet III,” which put a satisfying bow on a trilogy if it were truly the end. Four years later, as Green gathered audiences for a 10th Anniversary screening of the original “Hatchet” at the FrightFest Film Festival, it turned out to be a surprise screening of the furtively shot “Victor Crowley,” the fourth installment in the deathless series. It's exactly what it says on the box, but more lovingly made than lazy and always eager to please those awaiting another reliable Crowley hackfest.

Former paramedic Andrew Yong (Parry Shen) has written a book on surviving the massacre of the “Bayou Butcher,” capitalizing on the tragedy. When his book signing in Louisiana is cut short, his agent Kathleen (Felissa Rose) persuades him with $600,000 to go back to the crime scene, New Orleans’ Honey Swamp Island, with a TV host, Andrew’s ex-wife Sabrina (Krystal Joy Brown), and camera crew. Meanwhile, girlfriend-and-boyfriend director Chloe (Katie Booth) and Alex (Chase Williamson), along with Chloe’s best friend and makeup-effects artist Rose (Laura Ortiz), are already at the swamp, ready to make their movie based on the 2007 Victor Crowley murders, but as they get their equipment ready and find acting talent in Honey Swamp Island tour guide Dillon (Dave Sheridan), Yong’s plane crashes nearby. Once everyone who survived the crash comes to, they hear the sounds of Victor Crowley’s ghost (Kane Hodder) being reborn, and he’s ready to slaughter those trespassing his home.

Alongside “Hatchet III” paramedic Andrew Yong (Parry Shen, who has played three different characters in the series), “Victor Crowley” introduces a new batch of characters, all of them fair game for Crowley’s handy tools and bare hands. The plot itself sticks to the basic formula that not even “Hatchet” invented, but like the previous entries, there is a sense of humor to all of it. Next to the insane level of gore, the cast on hand is a major highlight, delivering a lot of the laughs. While Parry Shen is welcomed back to be the main protagonist as Andrew, the film does seem to missing a tough heroine like Danielle Harris’ Marybeth this time. The supporting players, however, make up for it. Felissa Rose (1983’s “Sleepaway Camp”) is hilarious as Andrew’s outspoken, overmedicated, New Jersey-accented agent Kathleen, and Laura Ortiz (2006’s “The Hills Have Eyes”) is a hoot and a standout as comfortable-in-the-nude makeup-effects artist Rose; when Rose gets hit on by the Honey Swamp Island’s tour guide and aspiring actor (Dave Sheridan), she shoots back, “I have a dick,” and she gives it right back to Sabrina who puts down Andrew in the sinking plane. Dave Sheridan (2000’s “Scary Movie”) also makes most of his comic-relief shtick land as goofy wannabe-actor Dillon, and even Brian Quinn (“Q” from TV’s “Impractical Jokers”) has some moments as sound producer Austin.

Getting even more mileage out of Crowley-created carnage, “Victor Crowley” gushes so many outrageous decapitations and tendon-ripping geysers of blood that one can just imagine the buckets of corn syrup making up most of the budget. There is an amusing callback to Victor’s trusty electric sander, which seems to be right where he left it, and director Green uses a motion-sensor light outside of a shed to startling effect. Always more fun than frightening, the film is still not always predictable; who will be left standing by the end is never made obvious. Like any sequel in a stalk-and-kill series, “Victor Crowley” won’t convert anyone, but it shouldn’t disappoint any Crowley fans who will get what they paid for.