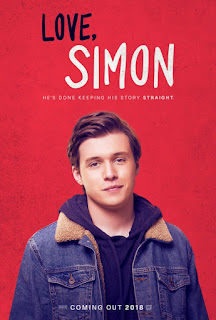 Remarkably, “Love, Simon” is the first of its kind: a gay coming-of-age dramedy being distributed by a major studio and hitting mainstream multiplexes. Shattering the glass ceiling and representing the LGBTQ community on 2,400 screens, the film is unprecedented but also happens to be wonderful, wearing its tender, open heart on its sleeve for the world to see. Based upon Becky Albertalli’s novel “Simon vs. the Homo Sapiens Agenda,” “Love, Simon” is intimate and deeply felt both as a slice-of-high-school-life and a portrait of a closeted teenage boy ready to live his truth. It’s sensitive and sincere without ever coming off corny, beautifully written and unforced without ever reaching for the violins or turning into a Freeform Original Movie, and if he were still alive today and more aware of political correctness, John Hughes probably would have written and directed it.

A senior at Creekwood High School, affable 17-year-old Simon Spier (Nick Robinson) is tired of living a double life: he feels like a normal teenager who just happens to be gay. It shouldn’t change the way anyone perceives him, but Simon isn’t quite ready to unveil his secret to his loving family—parents Emily (Jennifer Garner) and Jack (Josh Duhamel) and younger aspiring-chef sister Nora (Talitha Bateman)—and close group of supportive friends—bestie Leah (Katherine Langford), new girl Abby (Alexandra Shipp) and soccer player Nick (Jorge Lendeborg Jr.)—and confront the pressure and fear that it could change his relationships with them. When an anonymous fellow Creekwood student, under the moniker “Blue,” posts on a Post Secret-like blog that he is gay, Simon jumps at the opportunity to respond via email and they begin a correspondence and a penpal friendship that could help each other and perhaps blossom into something more. At school, Simon looks at everyone, wondering who could possibly be “Blue,” but when he accidentally leaves his email account open on a school library computer, confident social outcast Martin (Logan Miller) discovers Simon’s secret. This begins a blackmailing scheme, as Martin threatens to out Simon if he doesn’t help him woo Abby, that only takes a toll on Simon and his friendships even more.

Identifiable, wise, affecting and just plain sweet, "Love Simon" manages to charm and entertain as a crowd-pleaser and not sacrifice truth. As written by Isaac Aptaker & Elizabeth Berger (TV’s “This Is Us”) and directed by Greg Berlanti (2010’s “Life as We Know It”), the film never feels less than passionately made, effortlessly balancing touching pathos and quick-witted humor. It may not recreate every person’s coming-out experience, but the details are all authentic and relatable. The film normalizes Simon as a teenager who is just like anyone else and deserves love just as much as the next person. As Simon begins picturing who “Blue” might be, the film envisions each “suspect” in front of the computer, and there is also a sharply funny scene where Simon imagines all of his straight friends coming out to their families. When Martin’s blackmailing scheme could have diminished the film into manipulative, predictable developments, that is never the case. Though his actions are annoying and selfish, threatening to take away Simon’s free will to reveal his secret on his own terms, Martin is too oddly likable the way Logan Miller (2017's "Before I Fall") plays him to ever become a one-note antagonist (he even cleverly dresses as a Freudian slip at a Halloween party). Always key in a high school film, the soundtrack is complimentary of a young person’s life, including Bleachers’ “Rollercoaster” and 1975’s “Love Me.” There’s even a flight-of-fancy musical number to Whitney Houston’s “I Wanna Dance with Somebody (Who Loves Me”) on a college campus that is delightfully smile-inducing in its exuberance. Like a lot of romantic comedies, the film culminates in a grand, public declaration of love, as the viewer is waiting to exhale right along with Simon before he meets "Blue" in person and has his giddy Jake Ryan Moment on a carnival ferris wheel.

Nick Robinson (2017’s “Everything, Everything”) is so darn likable and sympathetic as Simon Spier, who deserves to be the hero anyone afraid to come out of the closet can look up to and learn from. Simon has known that he was gay since he was a preteen infatuated with Daniel Radcliffe as Harry Potter, but his resistance to coming out isn’t because he’s ashamed of it; he just doesn’t want to change the way his two major support systems see him. This is Robinson’s show, but everyone in the sprawling ensemble gets time to shine. Rounding out Simon’s close group of friends who are all winning and share natural chemistry with each other, Katherine Langford (Netflix’s “13 Reasons Why”) is warm and supportive, as Simon’s best friend Leah, who harbors a secret of her own; Alexandra Shipp (2017’s “Tragedy Girls”), so charismatic and eye-catching as the down-to-earth Abby that one completely understands why a few classmates have a crush on her; and Jorge Lendeborg Jr. (2017’s “Spider-Man: Homecoming”) lends gregarious personality to Nick.

Jennifer Garner and Josh Duhamel are lovely as Simon’s open-minded parents Emily and Jack, each of their individual moments with Simon resonating with tenderness and honesty. Even if they were given a few more scenes, Garner and Duhamel are likely the the most lovable and progressive movie parents since Stanley Tucci and Patricia Clarkson in “Easy A.” Tony Hale’s goofy shtick, as trying-hard-to-be-hip vice principal Mr. Worth with a penchant for oversharing with his students, gets laid on a bit too thick, but Natasha Rothwell (HBO’s “Insecure”) is much funnier and better used as Ms. Albright, the exasperated theater teacher who never minces words during rehearsals of “Cabaret” and even calls out a couple of jocks in the cafeteria when they mock Simon and another out-and-proud classmate, Ethan (Clark Moore, who’s a sharp-tongued scene-stealer).

Stories about gay characters coming out and/or falling in love have been told on the indie, arthouse and foreign circuit for quite a while now. While a handful have made more progress coming into the mainstream—2005’s “Brokeback Mountain,” 2015’s “Carol,” 2016’s “Moonlight” and 2017’s “Call Me by Your Name” were all awards contenders—and are comparatively less upbeat, “Love, Simon” marks a turning point. A joyous, celebratory poster child for love and acceptance, the film remains true to itself. It’s the kind of special cinematic treasure one will wish he or she had to turn to when figuring themselves out at 17, and that a LGBTQ story is getting a mainstream release, “Love, Simon” is a miracle and a major step forward.