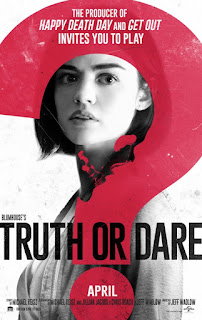 Blumhouse Productions has built a reliable (and profitable) brand out of elevated horror projects on small budgets. By now, the production company has proudly earned the right to put their name before the on-screen title for the first time, but regrettably, “Blumhouse’s Truth or Dare” is their first major misfire that looks more like a generic Asylum Entertainment release and actually makes one long to watch Blumhouse's own “Ouija” instead. The premise is silly if not without potential, like a variation on the “Final Destination” formula coupled with 2015’s genuinely chilling “It Follows.” There is a supernatural curse, this time in the form of a once-harmless party game, where passing something on like a chain letter can lessen one’s chances toward doom. Watching characters forced to play a game and then die in bloodless ways, one gets the nagging feeling that this film was edited down to a toothless PG-13 rating to appease a teen demo. While last year’s surprise “Happy Death Day” didn’t need an R-rating to be fresh and fun, the bottom-feeding “Blumhouse's Truth or Dare” actually aims to be scary, but there isn’t a solitary scare to its name and, most frustrating of all, it’s thoroughly sanitized.

Southern California college senior Olivia (Lucy Hale) plans to work for Habitat for Humanity over spring break but gets roped into going with bestie roommate Markie (Violett Beane) and their group of pals—Markie’s boyfriend Lucas (Tyler Posey); day-drinking Penelope (Sophia Taylor Ali) and her asshole boyfriend, prescription-selling med student Tyson (Nolan Gerard Funk); and gay friend Brad (Hayden Szeto)—on a debauchery-filled trip in Tijuana, Mexico. On their last night, Olivia meets Carter (Landon Liboiron), a nice guy at a bar, who invites her and her friends, along with douchey tag-along Ronnie (Sam Lerner), to an abandoned mission church to continue partying. They end up playing Truth or Dare, but before Carter leaves, he picks “truth” and reveals his intentions: he saw Olivia as an easy target and sees no problem with strangers dying if he gets to live. Once they return to school after their trip, Olivia is the first to discover that the game of Truth or Dare is haunting her and her friends, taking each of them down based on the order of a photo they took. If they don’t share their truth, they die, or if they don’t complete their dare, they die. How do they beat it?

Writer-director Jeff Wadlow (2013’s “Kick-Ass 2”) and screenwriters Jillian Jacobs, Michael Reisz and Christopher Roach (2014’s “Non-Stop”) could have turned this just-go-with-it premise into ghoulish fun, but at every turn, “Blumhouse’s Truth or Dare” seems to tame itself down and dodge the punchy payoffs audiences are coming to see in the first place. Besides the handcuffed MPAA rating, which allows a throat to be slit as long as no blood is shown, there are other problems. This being director Jeff Wadlow’s first horror film, none of the scares work. All of them are jump scares, to boot, and so predictably telegraphed on the expected beats and always involving characters sneaking up on one another. The film also has one gimmick to play and it has every principal actor (plus those around them) getting his and her chance to be possessed by the game's demon and have their face morphed into “a messed-up Snapchat filter” with a wide Joker grin, asking one of the players in a demonic voice, “Truth or dare?” It’s somewhat freaky at first and then laughable thereon. The characters’ predicament is reasonably involving at first to see how it revolves itself, especially when they realize their number of “truths” is limited and are forced to choose “dare.” By that point, though, so many soapy revelations have taken over that it’s hard to care who lives and who dies, and the ever-changing rules of the game that the characters conveniently sort out have become convoluted at best and asinine at worst.

Even by the standards of attractive, one-note horror-movie fodder, most of these characters are too disposable to really earn much concern. Lucy Hale (TV’s “Pretty Little Liars”) is an appealing talent, but she can only do so much with the insipid dialogue and tacked-on character layers as morally just do-gooder Olivia, who might just have an unforgivable secret she’s keeping from Markie and not that she has feelings for Lucas. Violett Beane (TV’s “The Flash”) at least has a feisty spark as perpetual cheater Markie, still reeling from her father’s suicide. Hayden Szeto, who made such a heart-melting impression in 2016’s “The Edge of Seventeen,” has the most scene-stealing charisma even here as Brad, who’s nervous about coming out to his police-officer father, but the script does a disservice to him. When Brad must tell his secretive truth to his father off-screen, the viewer curiously only sees the aftermath, a relieved Brad telling his friends what he had to do and Lucas asking, “Your dad didn’t know you were gay? Your ringtone is Beyoncé!” Szeto sells the response, but after the release of “Love, Simon,” the film treats Brad's subplot as an unprogressive taboo and sends him out on a note that is more appallingly distasteful than daringly cynical.

Rather than just upping the ante with wild dares and unpleasant truths, “Blumhouse’s Truth or Dare” has to send its remaining survivors back to Mexico to do some sleuthing and find a mute former nun who writes down the mythology of the curse. Of the dares, only Penelope’s dare to walk around the roof of their house for the time it takes to finish a bottle of liquor is tense and plays with expectations, as her friends follow her movements below with a mattress. In the end, characters must make ethical decisions to save their own skin and foolishly unleash the game on the rest of the world, forcing the film to, despite a cruel, mildly clever bit of irony on Olivia's part, solve nothing but actually dare itself to set up a sequel no one will be clamoring for. Truth? “Blumhouse’s Truth or Dare” is a waste of time that will whet a horror buff’s appetite for something more devilish and satisfying that never comes. Next, can we get "Blumhouse's Apples to Apples?"