Love Yourself: Schumer owns it in sweetly amusing, if imperfect, "I Feel Pretty" 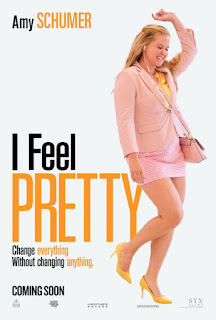 A wish-fulfillment fantasy-comedy that reflects the real-life anxieties produced by a culture that says women need to look a certain way and be a certain shape to feel worthy or be considered beautiful, “I Feel Pretty” is less hilarious than it is sweetly likable and amusing. Longtime writing team Abby Kohn and Marc Silverstein (who wrote 2016’s “How to Be Single,” 2009’s “He’s Just Not That into You,” and 1999’s “Never Been Kissed”) make their directorial debuts with this third starring vehicle for Amy Schumer, the first to go more for the heart than edge or envelope-pushing, pearl-clutching humor. With Schumer having established herself as a smart, confident, fiercely hilarious comedian who has no limits in getting a laugh, she is, fortunately, never the subject of ridicule or a walking punchline. As a comedy, it isn’t without a few jokes that fall flat, but Schumer and the supporting cast bring such a joie de vivre that allows one to be won over by the perfectly adequate “I Feel Pretty.”

Renee Bennett (Amy Schumer) is a capable, decent, independent Manhattan woman with close-knit friends (Busy Phillips, Aidy Bryant), but her low self-esteem often gets the best of her. Working in the unglamorous tech division in a Chinatown basement satellite office for cosmetics line Lily LeClaire has warped her notions of how people perceive beauty. One stormy night out of frustration, she tosses a coin into a fountain, wishing to be beautiful. Come the next day during an intense spin class at SoulCycle, Renee falls off her bike and bonks her head, and when she comes to, she is amazed at what she sees in the mirror and doesn’t even recognize herself. Externally, and to the rest of the world, Renee looks exactly the same, but to her, she looks like a gorgeous, physically fit supermodel and radiates flirty, fearless confidence. Feeling as good as she does, Renee decides to finally get out of her dingy office and apply for the receptionist position at the 5th Avenue headquarters for company heiress Avery LeClaire (Michelle Williams), the granddaughter to founder Lily LeClaire (Lauren Hutton). Then, she gets a boyfriend, Ethan (Rory Scovel), whom she picks up at a dry cleaners and is immediately attracted to her for loving herself. Naturally, all of this confidence goes to the new Renee’s head, potentially jeopardizing her relationships with the friends who liked her for her.

With a similarly magical setup to 1988’s “Big”—which Renee watches before giving her the idea to toss a coin into a fountain—“I Feel Pretty” is not about a shallow makeover, nor does it take the "Shallow Hal" route. It's about loving oneself inside and outside with a little confidence boost, which sounds simplistic on the surface, and yet everyone can relate to Renee's self-doubt. When Renee has undergone her self-image change, strangers coming off the elevator to Lily LeClaire immediately think they have entered the wrong floor when they see Renee at the reception desk. It’s played for laughs, although the viewer isn’t laughing at Renee, who holds her head high, but rather at everyone’s reactions. How directors Abby Kohn and Marc Silverstein use music and the camera during Renee’s swaggering strut into the HQ of Lily LeClaire is sly, and Renee subverting expectations when she enters a bikini contest on the Coney Island boardwalk is an exuberant highlight. In a lesser film, Renee would have been the butt of every joke, thinking she looks like someone she's not, but she's more of a celebratory figure.

Amy Schumer proves here that she can play different kinds of women besides the bawdy persona of 2015’s “Trainwreck.” When we first meet Renee, she feels identifiably invisible and insecure, obsessively comparing herself to women around her, and in a poignant early moment of truth, she strips down to her bra and Spanx, surveying her body and disappointed at what she sees in the mirror. Post-head injury, her mental and physical change is a delight to watch, and Schumer owns every moment with her just-right timing and fearless presence. Comedian Rory Scovel, as Renee’s love interest Ethan, is adorable, providing spark and charm while sharing a lovely chemistry with Schumer; he is the counterpoint to Tom Hopper, Avery’s conventionally hunky model brother Grant LeClair. In a wonderfully bizarre and committed performance, Michelle Williams is great fun to watch (and hear) as Lily LeClaire’s airy, baby doll-voiced CEO Avery LeClaire, a rare comic role since 1999 gem “Dick” as a reminder that she can do anything. Avery could have been played as a villain, even with that itty-bitty squeaker and her ethereal physical movements, but she, too, has her own insecurities that undermine her power and ability to be taken seriously. Busy Phillips and Aidy Bryant have their moments as Renee’s steadfast friends Jane and Vivian, who sign up Renee for a Grouper date, and Emily Ratajkowski is another extension of the film’s message as attractive but not dumb SoulCycle acquaintance Mallory, who also struggles with self-worth.

Good on “I Feel Pretty” for promoting such an optimistic, well-meaning message of empowerment, though one does wish the script could have found a less preachy and formulaic way to wrap everything up than in a public speech that pours on the square feel-goodery and the you-go-girl messaging, while also selling a diffusion line at Target. With that said, the film is a softer, tamer side of Amy Schumer that won’t offend anyone who actually sees it instead of being quick to judge, but her tart, self-deprecating brand of humor is still here and it’s what keeps “I Feel Pretty” feeling buoyant.