Secrets in the Attic: "Marrowbone" atmospheric and chilling with a mystery that stands up to scrutiny 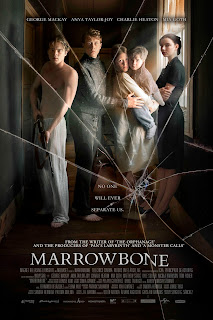 Sergio G. Sánchez, screenwriter of 2007’s “The Orphanage” and 2012’s “The Impossible,” makes his English-language debut with “Marrowbone,” a richly atmospheric 1969-set family drama with the bones of a spooky Gothic supernatural chiller. The film is evocative and handsomely shot, with an isolated location that is a character unto itself, caging its four characters like birds that experience trauma and loss early on and may never live a normal life among society. There is a secret at the core of “Marrowbone” that one waits in anticipation to be revealed, but it’s not treated merely as a gimmick so much as an emotionally and psychologically loaded progression that Sánchez has set up all along.

On the run from her murderous husband in England, Rose Fairbairn (Nicola Harrison) takes her four children to her desolate childhood home in New York with a shot at a safe, happy new life. When their mother falls ill and passes away before the eldest turns 21, Jack (George Mackay) must care for his brothers, Billy (Charlie Heaton) and little Sam (Matthew Stagg), and sister, Jane (Mia Goth), and protect them from something in the mirrors, which they cover with sheets, and the attic, which they have sealed up. After spending their happiest of days with the sweet and kind Allie (Anya Taylor-Joy), their closest neighbor who works as a librarian in town, Jack begins sneaking away to see her. Trouble arises, though, when a lawyer, Tom Porter (Kyle Soller), who rivals Jack for Allie's affections, needs Jack’s mother’s signature for estate affairs or else the siblings will lose the house and could potentially be separated. Trying to keep his family together will be more than Jack can handle as the secrets in the Marrowbone house refuse to be buried.

Truly suspenseful and chilling in spots, “Marrowbone” conjures up an eerie sense of mystery that gradually reveals itself to be about the horrors of the unknown and the mind. The breadcrumbs are subtly laid, playing fair with the viewer in what lies at the center. In the meantime, there is more than enough moody apprehension and jolts to induce goosebumps, from Jane sticking her hand in a hole in the ceiling to feed a friendly raccoon, to Sam having the guts to enter a forbidden room as the sheet on a mirror slowly comes off, to the cheer of The Beach Boys' "Wouldn't It Be Nice?" on a record player soothing the siblings as they sense a presence outside their safe-space tent, to Billy’s retrieval of a money box down the chimney. The performances are strong across the board, George MacKay (2016’s “Captain Fantastic”) leading the way as Jack, who has a shot at an even newer life with Allie, played by the always-watchable Anya Taylor-Joy (2018’s “Thoroughbreds”), who’s like a vibrant getaway from Jack’s simple life but acts as more than just a symbol. Rounding out the members of the Marrowbone siblings quite well are Charlie Heaton (Netflix’s “Stranger Things”), Mia Goth (2017’s “A Cure for Wellness”), and Matthew Stagg. One might say the third act flies off the rails, but the familiar twist that’s in store mostly stands up to scrutiny. Even if it doesn’t work in others’ eyes, “Marrowbone” has more in its heart than just a twist.