Sound Off: "A Quiet Place" an emotional delivery system of primal, nerve-shredding tension 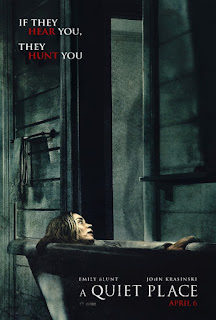 For a horror film completely dependent on silence, “A Quiet Place” is original in its conception and a masterclass in visual storytelling. With a concise, enticingly creepy hook for his third and most arresting directorial effort, writer-director-actor John Krasinski (2016’s “The Hollars”) and writers Bryan Woods & Scott Beck imagine a world with shades of 2003’s “Signs,” 2009’s “The Road” and 2017’s “It Comes at Night”—and maybe a pinch of 2016’s “Don’t Breathe”—where any false move of making sound could be fatal, and pares down this tale of survival to one family. Daringly quiet and patiently paced but urgent, the film is an expert study in minimalism with predominantly four characters and having no need for dialogue until the halfway mark. Holding the viewer in its grip from the very start, “A Quiet Place” has the power to hush chattery, popcorn-munching audience members the whole way through.

89 days in, the Abbott family is just trying to survive a post-apocalyptic wasteland, made dangerous by monsters who prowl the planet and attack when detecting sound. On their way back home on a path of sand from collecting supplies in an abandoned store, parents Lee (John Krasinski) and Evelyn (Emily Blunt) are the protectors of their three children, Marcus (Noah Jupe), the deaf Regan (Millicent Simmonds) and Beau (Cade Woodward), but the youngest is gone forever when placing the batteries back into his noisy toy rocket. On Day 472, the Abbotts are short one member of their family but try making the best of their not-so-ideal life in their farmhouse. Can the family remain safe when Evelyn gets pregnant and must bring a crying baby into the silent world?

Streamlined and efficiently laying out all the basic information one needs with a few newspaper clippings, “A Quiet Place” sucks one in immediately. The context and the particulars of this post-apocalyptic world are never explained with a title card or the spoken word, and that is for the best; this is just how things are now. The threat is clear, as are the rules of the threat, and the stakes are high. The family’s way of life is so scrupulously planned by writer-director John Krasinski that they seem to have figured out every plan of attack and every way to not make a peep with their resources. Having a deaf child, the family has grown accustomed to communicating through sign language. For dinner, they eat off edible leaves instead of rattling dishes and silverware. A game of Monopoly is played with pieces made out wool. They have marked the wooden floorboards in their home to know where to step without creaking. A strand of globe lights strung over the Abbots’ property signal an SOS when they turn red. How the parents anticipate a colicky baby is also handled pretty smartly. Holding up less to close scrutiny is how Evelyn and Lee were able to conceive a child in total silence, but that’s merely a nitpick. Even for a film that trusts pin-drop silence for a large chunk, the sound design is mighty effective, sometimes attuning the viewer to Regan’s hearing impairment.

All committing to the silent nature of the film, John Krasinski, Emily Blunt, Noah Jupe and Millicent Simmonds (who’s deaf in real life) make up a devoted family unit and convey more in their faces than any ham-fisted words could. The director shares a tender, understated moment with his real-life wife during a dance to Neil Young’s “Harvest Moon” via shared ear buds before putting her in so much peril. Emotionally available and retaining her maternal nurturing in every heightened situation thrown her way, Emily Blunt handles it all with aplomb, whether it be dealing with an exposed nail on a step to cowering in a bathtub while giving birth at the most inopportune time to realizing her safe haven is simultaneously flooding and being invaded by one of the monsters. Noah Jupe (2017's "Wonder") is a natural at conveying terror in his face as Marcus, and the facially expressive Millicent Simmonds, following her breakout role in Todd Haynes’ “Wonderstruck” last year, continues to impress as Regan, feeling a sense of guilt for the loss of Beau that adds a major source of emotional weight.

Forcing the viewer to be in a stew and become an active, breath-holding participant in the quiet game, “A Quiet Place” is a well-oiled, shiver-inducing delivery system of stressful suspense that wouldn’t work as well without the emotional investment in the family at hand (even if their credited names are never actually uttered in the film). The family is resilient yet fallible, and yet, this is not a horror film where characters commit baffling or idiotic actions that viewers could never see themselves doing in such a situation. Valuing the storytelling art of showing rather than telling, director John Krasinski also takes the approach of “Jaws,” “Alien,” or, most recently, 2014’s “Godzilla,” by only gradually revealing the monsters and their arachnid-like limbs in quick glimpses. Once the monsters are shown in full digitally rendered view, some of the dread slackens a bit without breaking the spell; a set-piece in a silo even ups the ante with the quicksand of the grain as life-threatening as the creatures and slyly reminding of the T-rex jeep attack in “Jurassic Park.” Driven by primal, nerve-shredding tension and controlled craftsmanship, “A Quiet Place” does the horror genre so proud as smart, classy mainstream genre filmmaking that one will need an alcoholic beverage afterward to take the edge off.