Birth of a Holiday: "First Purge" ballsy but too on-the-nose to make saga great again 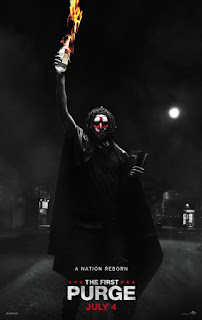 Looking back five years ago, it's hard to believe that 2013's "The Purge" could still be considered the slyest and most restrained in the franchise, doubling as a home-invasion genre picture and a societal allegory centered around a classically complicated moral conundrum. By the time “The Purge” saga hit its third (and best) installment with 2016’s “The Purge: Election Year” before our commander in chief was elected, it was prescient and all-too-real. There was no more sign of satire or allegory, and the politics were less than subtle without needing to be. Now, just in time for Independence Day comes “The First Purge,” a prequel retroactively taking a look at the birth of the annual holiday where crime is legalized for twelve hours. For the fourth go-round, James DeMonaco wrote the script but stands down as director, handing the reins to director Gerard McMurray. While this is decidedly the ballsiest and most blatantly politically charged entry of them all, “The First Purge” lacks the sick novelty of its predecessors and finds no new avenues into a skewed version of reality that it might as well be a guerrilla documentary of the times we live in.

It is a tumultuous time as unemployment is rising across the country. As NRA-backed political party New Founding Fathers of America (NFFA) ascends to power, a social experiment called The Purge is designed for citizens to get every aggressive impulse out of their systems and put to the test on Staten Island, populated by minorities and the socioeconomically impoverished. Two days before the one-night-only free-for-all, citizens who agree to stay in the New York borough are promised a $5,000 incentive and even more if they participate with a tracking device in the form of contact lenses to have their crimes monitored. Headstrong activist Nya (Lex Scott Davis) and her brother Isaiah (Joivan Wade) live in the low-come housing projects, and while they plan to hole themselves up in a Brooklyn church as a safe haven, Isaiah has other plans to exact revenge on feral junkie Skeleton (Rotimi Paul), who slashed his neck while dealing drugs earlier in the day. Meanwhile, local drug lord Dmitri (Y’lan Noel), Nya’s ex, puts him and his crew on lockdown, only to realize a close ally wants him dead to seize his throne. Monitoring the experiment is behavioral scientist Dr. Updale (Marisa Tomei), who proposed the idea for The Purge, but as the night starts out disappointingly quiet, participants choosing vandalism over murder, corrupt NFAA chief of staff Arlo Sabian (Patch Darragh) will do anything to make sure the results are successful—and to thin the population.

“The First Purge” still proves to work effectively as a provocative, politically loaded horror film on a humble budget, but given its attempt to be even more fiery and socially woke with real-life parallels specifically concerning race, it feels far more exploitative in a way, pandering to those angry and fearful over the current political climate that has divided the nation. While it’s no coincidence that the film has included a Make America Great Again hat in its marketing materials, art explicitly imitates life in the actual film when a sewer-dwelling pervert gropes a female, who responds back with, “Pussy-grabbing motherfucker!” The use of this throwaway line is certainly topical and pointed but also gratuitous, a microcosm of a film that no longer wants to deal with subtext when text gets the point across loud and clear. Director Gerard McMurray and writer James DeMonaco are daring in their axe-to-grind agenda—a character’s spoken worry for the future is telling—but still, nothing fresh is brought to the table by turning the clock back to the origins of The Purge, or at least by what was executed on screen. Without a scene to track how such a severe social experiment was actually passed, the film goes on to be just more of the same, purgers attacking around street corners and from under sewer grates, and too many last-second rescues. Some of the carnage is even erratically staged, particularly a near-ménage à trois turned deadly cross-cut with a block party turning into a slashing spree. As the film deviates from horror to a blaxploitation action pic and culminates in an apartment building siege, the level of dread does appreciably get revved up as a group of mercenaries dressed in leather Nazi gear and black face go door to door, while our heroes lie in wait.

The batch of characters who must survive the night are sympathetic by default, but no one makes as much of an impression as characters in previous “Purge” entries. Given the circumstances, the actors all acquit themselves solidly, particularly Lex Scott Davis (2018’s “SuperFly”) and Y’lan Noel (HBO’s “Insecure”), as Nya and Dmitri, who both have enough screen presence to bring some rooting interest to their plight. Mugga (Netflix's "Orange Is the New Black") also adds a welcome source of levity as Nya’s opinionated, church-going neighbor Dolores. As a key purger, Rotimi Paul fully disappears into the one-note role of Skeletor, a rotten-toothed, hyped-up junkie and psychopath, and makes him scary even on an over-the-top level. Unfortunately, Marisa Tomei is underutilized as Dr. Updale; while the actress imbues the small part with the feeling that her social experiment is for the greater good, she doesn’t have much else to do than look at surveillance monitors before being rushed off screen. And what is another major talent like Melonie Diaz (2016’s “The Belko Experiment”) doing here? She is introduced as an interviewed participant in The Purge and then never heard from again.

If "The First Purge" is rather clunky in not just wearing its politics on its sleeve but hammering them home and screaming from the rooftops with a megaphone, director Gerard McMurray makes sure to pepper the film with punchy, incendiary nightmare imagery that this series has thrived on. Two older women attaching explosive devices to stuffed animals is a demented touch, but even more frightening is a gang of white-hooded Klansmen seen leaving a church massacre and white police officers closing in on an unarmed black man on a baseball field as "America the Beautiful" plays. For a series whose concept has hinged on catharsis, there’s something more depressingly on-the-nose this time around than thrilling or thoughtful insomuch that if “The First Purge” signals to be the end, no one would protest.