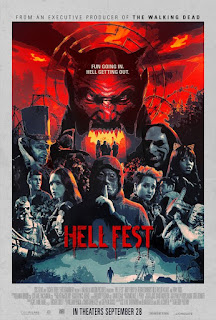 A slash-o-rama set inside a horror-themed amusement park, “Hell Fest” scratches a horror fan’s itch to see a straight-up, R-rated throwback to the slasher pics of yore with a killer backdrop. Sharing a bare framework with 2014’s found-footage excursion “The Houses October Built” and the carnivalesque setting with Tobe Hooper’s underseen 1981 gem “The Funhouse,” the film seems like it could practically write itself but is resourcefully directed by Gregory Plotkin (2015’s “Paranormal Activity: The Ghost Dimension”) and mixes a good-times vibe with taut, edgy tension. “Hell Fest” delivers exactly what it promises.

Reuniting with best friend Brooke (Reign Edwards) and roommate Taylor (Bex Taylor-Klaus), college student Natalie (Amy Forsyth) gets dragged to a traveling horror-themed haunt called Hell Fest on Halloween night. Joining them are Brooke’s boyfriend Quinn (Christian James), Taylor’s boyfriend Asher (Matt Mercurio), and Gavin (Roby Attal), Natalie’s crush who’s scored the group VIP wristbands to skip to the front of the lines. Even though horror isn’t Natalie’s cup of tea, she has fun getting spooked with Gavin and her friends. It’s all fun and games at first, until a man in a creepy flesh mask, who fits right in with the paid employees in the park, targets Natalie and begins following her around through each maze.

Playing by the slasher subgenre’s rules without attempting to reinvent them, “Hell Fest” still takes full advantage of its optimally creepy premise. As the viewer vicariously enters the funhouse atmosphere of Hell Fest with the characters, one is lulled into a false sense of security, as some of the dead bodies among the props could be real and one of the masked killers might be more than just a professional scarer taking his job seriously. The screenplay by Seth M. Sherwood (2017’s “Leatherface”), Blair Butler, and Akela Cooper is quite basic in terms of plot and victim-to-be character development, although the film moves at a good clip and the cast imbue their bare-bones roles with enough likable personality.

Amy Forsyth (Syfy's "Channel Zero: No-End House") makes for an appealing, relatable heroine as Nat, who figures out how to brave the mazes full of mannequins and real actors by looking at their hands and then later realizes the pattern of each maze and uses it to her advantage. She also shares a sweet, naturally awkward chemistry with Roby Attal as crush Gavin. Reign Edwards (FX’s “Snowfall”) lends spark and charisma as tough but quickly vulnerable Brooke, and Bex Taylor-Klaus (MTV’s “Scream”) makes a big impression, popping in every scene with a rambunctious energy as horror-obsessed Taylor. And Tony Todd, Candyman himself, is fun to spot in a cameo as Hell Fest’s carnival barker.

When it comes to a slasher movie, it’s a feature, not a bug, to watch a series of scenes with characters being stalked and killed. There are nasty, wince-inducing kills with a high-striker mallet and a non-prop syringe; a sequence involving a guillotine ratchets up the dread; and the climactic chase between the killer, Nat, and Brooke in the ultimate maze, known as Hell, makes clever use of each room, ending with one full of black-robed figures donning white masks. That the psychopath at hand comes with no true identity or motive is just as well because the truly unsettling final scene makes up for it, and there’s a leitmotif of the killer humming “Pop Goes the Weasel.” Atmospheric with a neon-colored aesthetic, the film oozes deliciously vibrant production design and creepy inspiration when the characters wander through each different maze. With the “Saw” and “Paranormal Activity” franchises fading away as the horror genre’s Halloween-released mainstays, “Hell Fest” offers a frightfully fun Halloween fix for fans of horror and amusement parks.