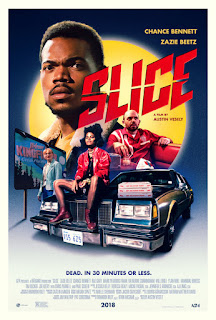 Any genre film that throws ghosts, a werewolf, a coven of witches, and pizza delivery drivers into the mix is easy to root for and clearly deserves creativity points, but debuting writer-director Austin Vesely’s promise for a hip, larky wannabe cult item is only partially fulfilled with gleefully performed horror-comedy “Slice.” He injects a lot of unpolished, anything-goes energy into this low-budget production that proves to be infectiously playful at first, and while the film isn’t without its amiably weird charms and an ‘80s-retro vibe, it’s hard not to be let down by the scattershot, mostly forgettable delivery. The spirited, lovingly rendered animated opening credits sequence hints at an experience that will be a blast, but as the rest of the film plays out, “Slice” feels half-baked, dashed-off, and always right on the edge of taking off.

In the spooky town of Kingfisher, the overpopulation of 40,000 ghosts walking among the living has been decreased by the crooked mayor (Chris Parnell), who has relegated the specters to a nearby borough known as Ghost Town. When pizza-delivery stoner Sean Hammerschmidt (Austin Vesely) is slain, the murder puts the townsfolk into a frenzy, particularly owner Jack (Paul Scheer) and the employees of local pizza joint Perfect Pizza, which is based on a haunted burial ground. This spurs on Sean’s ex Astrid (Zazie Beetz) to return to her job of delivering ‘za and hunt down the slasher herself with her switchblade. Meanwhile, newspaper journalist Sadie Sheridan (Rae Gray) is determined to get to the bottom of the murder and see if there is any spectral involvement; a group of middle-aged women spend their time protesting Perfect Pizza; and two bumbling cops have their own hunch when moped-riding werewolf/former Chinese food delivery driver Dax Lycander (Chance Bennett) has recently returned to town. Could there be a bigger curse at work here? Might Perfect Pizza be built above the gateway to Hell?

“Slice” throws so much excess at the wall for a fun supernatural slasher-mystery mishmash with a cheeky, macabre sense of humor, but it hasn’t quite figured out what to do with all of its spare parts, striking as a busy, messy rough draft in need of punchier jokes and a sharper focus. An intentionally stiff pizza commercial right before the end credits is funnier than any would-be chuckle in the film. The magnetic Zazie Beetz (2018’s “Deadpool 2”) is a badass force, and Chance Bennett/Chance the Rapper, though a little green, shows natural charisma in his big acting break as a self-proclaimed attractive werewolf. Otherwise, the promising ensemble, including Joe Keery (Netflix’s “Stranger Things”), Hannibal Buress, and Y’Lan Noel (2018’s “The First Purge”) who each get a scene or two apiece, seems to have been shaved down in the film’s finished form. “Slice” is oddly likable for a spell, but all over the place, like a pizza pie that's been sloppily piled high in toppings. There might even be a kitchen sink in there somewhere.