Soldiers vs. Predator: "The Predator" sometimes diverting but mostly a mess 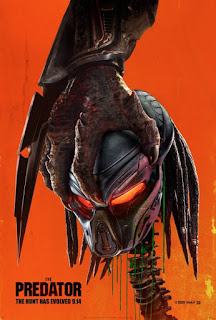 The “Predator” franchise seemed defunct after cross-pollinating with another certain face-hugger’s franchise in 2004’s potentially cool but pretty boring “Alien vs. Predator” and 2007’s gory if fun-free “Aliens vs. Predator: Requiem.” With the prospect of writer-director Shane Black (2016’s “The Nice Guys”) and co-writer Fred Dekker (1987’s “The Monster Squad”) rebooting 1987’s taut jungle-set sci-fi thriller “Predator,” fans of the Arnold Schwarzenegger-starring original had a right to expect an exciting revitalization and an ideal match of material with this filmmaker’s sensibilities. What they get instead is a sometimes diverting mess with a haphazard script, glaringly underwritten stick-figure characters, one-liners that land 50% of the time, and a flubbed attempt to make the dreadlocked, camouflaging, heat-detecting “space aliens” frightening again. It’s fun in spurts and has the vibe of something made back in the late-'80s or early-'90s, but give us 2010’s moody, tense, exciting sequel “Predators” any day.

On a mission in Mexico, Army sniper Quinn McKenna (Boyd Holbrook) has a close encounter with a Predator ripping apart the rest of his platoon when the space aliens’ ship crashes nearby. He gets his hands on their alien tech and sends them to a P.O. box as proof that the government has been covering up these extraterrestrial sport hunters. Unfortunately, the package gets rerouted to McKenna’s home instead and his estranged autistic son, Rory (Jacob Tremblay), opens the box and plays with the Predator’s helmet and wrist gauntlet, unwittingly activating a distress signal to the aliens. Meanwhile, evolutionary biologist Dr. Casey Bracket (Olivia Munn) is called in by shady government agent Will Traeger (Sterling K. Brown) to study the Predator that has been captured to be weaponized for Project Stargazer, but naturally, the alien wakes up and goes on the hunt. At the same time, McKenna is rendered mentally ill after being interrogated and taken from the VA to a bus headed for lobotomization with a ragtag group of fellow PTSD-suffering soldiers, dubbing themselves “The Loonies”—among them, the suicidal Gaylord “Nebraska” Williams (Trevante Rhodes), “your mom” joke-spouting Coyle (Keegan-Michael Key), Tourette Syndrome-diagnosed Baxley (Thomas Jane), Bible-banger Nettles (Augusto Aguilera), and Irish Marine Lynch (Alfie Allen). When Casey runs into the soldiers, they head to McKenna’s home to save Rory, while trying not to become hunted themselves by the Predators.

With a breakneck pace, “The Predator” doesn’t waste a second having a predator ship crash-land on Earth or waste any time setting up its characters properly. What writer-director Shane Black (who had a feature-debuting role and a nasty demise in the 1987 film) does bring to this property is what Black does well, retaining his ear for flippant, politically incorrect banter of the macho variety and certain scripting trademarks, including the involvement of a precocious youngster (this time, the child is somewhere on the autism spectrum) and setting his story during a holiday (Halloween instead of Christmas). Despite Black’s jokey specialties on full display (even the sport hunter giving the thumbs up with a severed arm is good for a mordantly goofy gag), the film introduces the Predators’ new goal for hybridization when it comes to the human species they hunt. Misguided ideas, like Rory becoming a prize because autism is the next phase in human evolution, and creative choices, like tossing in a much bigger Predator 2.0 and silly-looking Predator Dogs, were better off being cut before principal photography. Instead, certain character beats seemed to have been whittled down or hacked completely in the editing process, making for a speedy but noticeably choppy final edit deemed ready for theatrical release.

The eclectic cast is solidly colorful, even if the characters they're given to play are never substantially defined to genuinely care about their fates and the majority of them are just there to be joke machines. Looking more and more like Devon Sawa, Boyd Holbrook (2017's "Logan") is eminently watchable as decorated sniper Quinn McKenna. Olivia Munn (2016's "Office Christmas Party") is credible and gets to handle herself capably in the thick of the action in the slimly conceived role of Dr. Casey Bracket; the way in which the character hooks up with “The Loonies” has a fun, almost slapsticky choreography to it, as Casey lands on their bus, accidentally shoots herself with a tranquilizer dart and jumps off the roof of the bus with the hope that one of them will catch her. There’s also something oddly endearing rather than creepy when Casey awakens, like Snow White, on a bed in a hotel room, surrounded by trinkets and confused by the sight of five soldiers politely standing on the other side of the room as if they’ve never seen a woman before.

With the most engaging, charismatic presence and given the most hints of an actual backstory out of "The Loonies," Trevante Rhodes (2016’s “Moonlight”) makes the strongest impression as the chain-smoking Nebraska, while Keegan-Michael Key (2016's "Why Him?") and Thomas Jane (2016's "Before I Wake") trade vulgar, smart-ass quips that alternately hit and clang as Coyle and Baxley. Wildly magnetic and full of gusto even without a meaty role, Sterling K. Brown (2018’s “Hotel Artemis”) seems to be having a grand time being bad as the cold-as-ice Traeger, chewing scenery like it’s Trident gum, which seems to be in his mouth the entire time. Jacob Tremblay (2017's "Wonder") is likable as the brilliant Rory McKenna, but his obligatory kid role becomes more of a prop as the film goes along, and one will notice that he is sensitive to noise during an early scene when two bullies pull the fire alarm but nothing triggers him when everyone is firing at the Predators. As the second resident woman with a speaking part in the film, Yvonne Strahovski (2017's "All I See Is You"), as McKenna’s ex-wife Emily, looks like she will figure into the proceedings somehow, but once she escapes her basement from a sneak attack by the big, bad Predator, she is never heard from again.

Palpable thrills and tension are sorely fleeting, and none of the human confrontations with the Predators are staged as true set-pieces with much imagination or suspense. The action is variable, gory when it needs to be but rather rote and not particularly exciting, as full as it is of shooting and explosions. It’s often edited so frenetically that spatial geography and coherence go through the chopper, particularly in the film’s poorly lit final showdown in a forest that muddles the unceremonious death of one of the main baddies. There is fan service, like a sly glimpse of Lawrence A. Gordon Middle School (Gordon was a producer on the first two “Predator” films and this one), not-too-distracting nods to the 1987 original and the 1997 setting of the 1990 sequel, a direct callback to one of Arnie's famous lines, and Henry Jackman’s rousing score has tinges of Alan Silvestri’s original score. Despite the preceding article, “The Predator” is not a definitive addition to the series. It’s appreciably R-rated, as one expects from this kind of genre effort, and not castrated with the dreaded, sterilized PG-13 like “Alien vs. Predator.” While that film was a joke itself, the written jokes are so front and center here that the menacing threat of the Predators is gone. The asinine setup for a sequel might be the biggest threat of all.