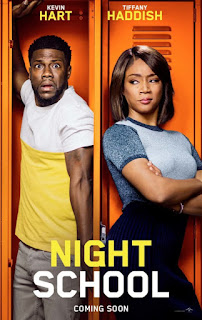 “Night School” is a comedy that has its preliminary work down because it matches Kevin Hart (2017’s “Jumanji: Welcome to the Jungle”) with Tiffany Haddish (2018’s “Uncle Drew”) and practically banks on the laughs to just flow through sheer osmosis. Both stars get to do what they do best, but this is no one’s finest hour, and director Malcolm D. Lee (2017’s “Girls Trip”) and a half-dozen screenwriters (Kevin Hart & Harry Ratchford & Joey Wells & Matthew Kellard and Nicholas Stoller and John Hamburg) can’t even punch up merely passable material. What has shown up on the screen in the form of the good-natured but middle-of-the-road “Night School” simply misses the mark of being as hilarious as its two dynamite stars.

Always one to freeze up when taking an exam, high school dropout and Teddy Walker (Kevin Hart) has made a successful life without a diploma seventeen years later by being set to take over the business of a BBQ grill and patio store and ready to propose to his smart, gorgeous girlfriend Lisa (Megalyn Echikunwoke). When he pops the question to Lisa in an elaborate proposal in the store, Teddy accidentally blows up the store, leaving him to figure out a Plan B: become a financial analyst underneath his best friend Marvin (Ben Schwartz). The only catch is that (1) the position requires a GED; (2) the only night class being held locally is in his former high school where Teddy’s former enemy (Taran Killam) is now the school’s principal; and (3) the no-nonsense night school teacher, Carrie (Tiffany Haddish), is someone he got into a verbal squabble with at a red light. Too embarrassed to tell his fiancée where he’s really going at night and that he finds temporary employment at a Christian Chicken fast-food joint, Teddy will do what he has to do to face his undiagnosed learning disabilities and finally pass his GED exam to graduate.

“Night School” has two robust comedic performers in its pocket, but the ways in which it uses them is more wearisome than laugh-out-loud funny. Kevin Hart can be fun to watch when he goes off the mediocre script and just lets his frantic motormouth screen persona run loose. As Teddy, Hart doesn’t get to stretch too far from his other big-screen roles, but as much of a dumbed-down contrivance as it is to have Teddy lie to his fiancée, he does fine with establishing Teddy’s familiar arc as a born bullshit artist getting a second chance. Breaking into the big time with her rib-ticklingly uninhibited personality turned up to eleven in “Girls Trip,” Tiffany Haddish varies her shtick a little bit here as Carrie, underplaying as much as a force of nature like her can. Even though she functions as the straight woman in the comic pairing, Haddish still forges an amusing give-and-take with Hart when given the chance to dish it out; her powers really deserved a better follow-up vehicle, though.

“Night School” is too low-stakes and scant on laughs and narrative flow to warrant its long-winded length. Playing like a practice test itself, the film seems to have cobbled together the weakest takes, with the occasional line dubbing to snag a more commercial PG-13 rating, and the laziest impulses of its six writers. Smack dab in the middle of the film is an interminable caper Teddy spearheads with his adult peers to steal the practice GED exam, ending with a broad bit of physical comedy and a vomit gag that both fall flat. The side players of Teddy’s fellow night-school classmates are still affably oddball company, including an almost-unrecognizable Romany Malco, as a tech-phobic conspiracy theorist; Mary Lynn Rajskub, a hoot as a positive but put-upon wife and mother; Rob Riggle, as an oafish dad; Fat Joe, as a convict joining in via Skype from prison; Anne Winters, as a dropout who wants to go to college; and Al Madrigal, as a Mexican immigrant waiter who lost his job after Teddy planted pubic hairs in his dessert (don’t ask). Like their own version of “The Breakfast Club” or “Summer School,” this bunch brings a refreshing jolt of weirdness to the margins. Hart and Haddish are enjoyable balls of energy and could find laughs in reading from the phone book, but with "Night School," it's a shame the script they’re working with in tandem is regrettably only average at best.