Clash of the Millennial and Baby Boomer: "Tone-Deaf" sometimes acerbic, sometimes creepy, but too heavy-handed 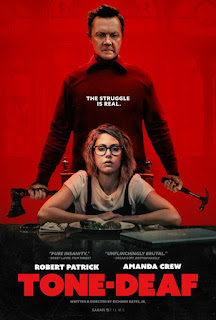 “Tone-Deaf” reaffirms that writer-director Richard Bates Jr. (2016’s “Trash Fire”) is not a filmmaker for all tastes. His pitch-black sense of humor and criss-crossing of different tones have worked mostly in the three other films to his name, dodging easy categorization, but here, the blend of social commentary, horror, and comedy is never as smooth as one would like it to be. While “Tone-Deaf” wavers tonally between arch, off-kilter humor and violence as if two different movies are getting in the way of each other, there’s still some twisted fun to be had in this angry, equal-opportunity diatribe about the tumultuous chasm between two generations — liberal Millennials and stodgy Baby Boomers.

Los Angeles twentysomething Olive Smith (Amanda Crew) is having a frustrating week, what with breaking up with her boyfriend she doesn’t even like and then shortly after losing her job days before Free Lunch Friday. To get out of the city and decompress for the weekend, she rents out a five-bedroom country manor owned by a widower, Harvey (Robert Patrick). As Olive takes time to herself and gets bored pretty quickly, the dementia-stricken Harvey is finally ready to scratch an itch: tap into his sociopathic tendencies and take out a generation of spoiled brats, starting with Olive, who isn’t entirely the snowflake Harvey assumes.

“Tone-Deaf” is sometimes amusingly acerbic and sometimes creepy, but it’s almost always hammering home its on-the-nose points about generational differences in ways that are more heavy-handed than sharply satirical. The crotchety Harvey breaks the fourth wall on numerous accounts to condemn and rant about the younger generation that’s supposedly sending the country down the tubes, and in the climactic moments, Olive gets to call out Baby Boomers. In breaks from reality that still aren’t subtle but visually interesting, Harvey has surreal nightmares of himself clad in red long johns and encountering people (sometimes two men with anatomically gender-bending parts) in blue body paint as if he’s trapped in an art installation. Red and blue, get it?

Conceptually, the film is quite ambitious and attempts to bring humanity to both Olive and Harvey with their shared losses, although time is split between both of them so much that it’s hard to get a complete grasp on both the protagonist and antagonist. The game performances at least carry the proceedings, from Amanda Crew having a snarky, feisty charm about her as the eye-rolling Olive, despite her self-absorption and lack of job prospects, and Robert Patrick giving a dedicated, uninhibited, “get off my lawn”-type turn as the Millennial-hating Harvey. Kim Delaney also lends warmth and more levity as Crystal, Olive’s hippie mother who has lived on a commune since her husband (Ray Wise) committed suicide when young Olive was performing at her piano recital. The director’s usual suspects, like AnnaLynne McCord, Ray Santiago, and Ronnie Gene Blevins, have bit roles for additional color, and Keisha Castle-Hughes (a long way from 2002’s “Whale Rider”) is a hoot in one scene as a drug dealer-cum-car wash attendant.

One of the apt running jokes in “Tone-Deaf” is that Olive doesn’t know how bad of a piano player she really is, filling her head with the notion that it was always her dream to play, but no one tells her the truth that she can’t play a lick until the climax with Harvey. The horror side of things in terms of acid-trip hallucinations and Harvey’s grisly murders is effective, but pretty standard just the same; contact lens wearers will certainly cringe when the blind-as-a-bat Olive can’t find her glasses, though. All in all, the film’s title is anything but a misnomer, as “Tone-Deaf” has a point-of-view but isn’t quite sure how to go about saying it without addressing the audience directly.