For January, "Youth in Revolt" sweet and amusing 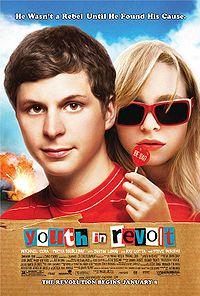 Needless to say, Michael Cera is born (some may say, stuck) in the role of a naturally awkward, dweebish virgin. So it's not much of a surprise when we meet his character, Nick Twisp, the precocious Oakland 17-year-old hero of C.D. Payne's book who gets done masturbating and then says he's “a voracious reader of classic prose...and still a virgin.” His divorced mom (Jean Smart), with her new trashy lover (Zach Galifianakis), and his dad (Steve Buscemi), shacked up with a trophy blonde (Ari Graynor), are getting more action than him. On a vacation getaway in a trailer park with Mom and Loser Boyfriend, Nicky meets his likeminded neighbor, Sheeni Saunders (fresh newcomer Portia Doubleday), who shares his taste for vinyl records and foreign cinema. She's been dating a preppie named Trent, but Nick is smitten. Some bad-boy advice from Sheeni motivates Nick to invent a mustachioed, smoking alter ego, Francoise Dillinger, who always gets what he wants.

In "Youth In Revolt," it's refreshing to see Cera being able to stretch his soft-spoken milquetoast type a little, getting to be “superbad,” playing someone with more confidence as Francoise. Director Miguel Arteta (2002's "The Good Girl") is no stranger to this quirky type of comedy, even inserting an offbeat claymation intro, and gets funny work out of his qualified cast in bit parts, but one wishes their colorful peripheral characters had more to do, or that screenwriter Mike White had worked with Arteta again: Fred Willard appears as a bleeding-heart neighbor stashing immigrants in his basement, Jason Long plays Sheeni's pothead brother, and Emmet Walsh and Mary Kay Place as her religious fanatic parents.

Some of Gustin Nash's smart, hipster dialogue, feeling more like prose, is so familiar of "Juno" and calls attention to itself, but let's digress. "Youth in Revolt" is fun while it lasts, thanks to Cera's comfortable presence and Doubleday, who's a real find as Sheeni. It's sweet and intermittently funny, so for an early January release, it's a blessing.