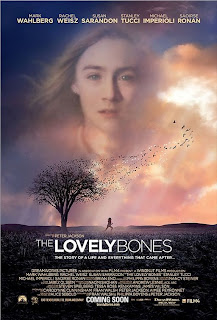 A dead 14-year-old girl, Susie Salmon (Saoirse Ronan), like the fish, from Norristown, Pennsylvania, narrates her own story from beyond of how she was murdered in 1973 in Peter Jackson's disappointing adaptation of Alice Sebold's book, "The Lovely Bones." Her father (Mark Wahlberg) becomes obsessed with finding his daughter's killer: a keep-to-himself neighbor, Mr. Harvey (Stanley Tucci), who likes building dollhouses. Rachel Weisz plays the mother who just wants to put Susie's death behind her, but doesn't know how to cope so she runs away.

Sebold's 2002 reportedly complex 2002 novel is emotionally muted on screen, although director Jackson brings an optic loveliness to the “in-between” in which Susie inhabits and watches over her family and killer, “Our Town” style. The world—a purgatory “middle earth” of sorts between Heaven and Earth—would thought to be unfilmable, but if Peter Jackson (who visually rendered the "Lord of the Rings" films and "Heavenly Creatures" to perfection) can't do it, no one can. He creates a visually rich, beautiful, and trippy wonderland of candy-colored skies and fields, sailboats in glass bottles, and a gazebo, with lush music choices. The placid suburban Pennsylvania neighborhood (filmed in Malvern) and '70s time period are also created quite vividly, along with the haunting cornfields.

Sometimes, Jackson overreaches himself, taking us out of the film as when Susie and her heaven friend, “Holly Golightly,” dance on '70s records in hippie garb. In spending too much time in the CGI world, alas, not much time is spent on the family and their grief. When the film turns into a detective story, Jackson at least gets the thriller stuff right: in a tense moment, a detective (Michael Imperioli) and Harvey eye each other through the windows of the killer's dollhouse; and Susie's tough, suspicious sister, Lindsey (Rose McIver), breaks into Harvey's house to find evidence in a suspenseful set piece.

Giving an assured performance and poetic narration, Ronan is excellent at the film's core and holds it together mostly. Tucci, as a man of uncontrollable impulses, is terrifically creepy with his nervous titter and nebbish mustache, a look that'll give you the skeevies. Wahlberg is convincing as a man fighting for his daughter, and early on, Weisz is heartbreaking but then her character disappears. Susan Sarandon, brought in to add humor and levity as the boozy, chain-smoking grandmother, brings a sudden shift in tone to comic domestic hijinks: another time we're taken out of the film. She turns into an Auntie Mame caricature, with a set piece right out of "Uncle Buck" (overflowing washing machine included).

Fran Walsh, Philippa Boyens, and Jackson's script takes a safe, aloof approach, barely hinting at Susie's rape and keeping her murder off-screen (both explicitly described in Sebold's novel). It's inescapable to not be drawn in by this absorbing story for the first act, but some scenes work and others do not, Jackson fashioning this sad-but-hopeful story into a visually lovely but bare-bones vision. The climax of Mr. Harvey's comeuppance is even a confused contrivance and the final scenes are cornball. We still get the sense that a girl from beyond has the power to heal, as when Susie simply utters, “I was here for a moment, and then I was gone,” like a photograph. But with its discouragingly mixed results, "The Lovely Bones" is an unsatisfying experience and not as emotionally cathartic as it should be.