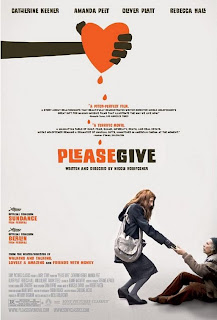 New York, flawed people, upscale apartments, extramarital affairs: Is writer-director Nicole Holofcener (2006's "Friends with Money") the female Woody Allen? She even opens her film with a visually surprising mammogram montage cued to the Roches' version of “No Hands.” In "Please Give," the filmmaker's fourth feature film (with Catherine Keener), this low-key, piercingly observant slice of life explores realistic, complex, fragile characters rather than worrying about propellant plot. Kate (Catherine Keener) is a New Yorker who packages up furniture from dead people's apartments and sells them at her and husband Alex's (Oliver Platt) store for an expensive price. She wears her guilt on her sleeve when she walks down the streets littered with homeless people; so ashamed with guilt she'll give $20 to a poor man but not to her teenage daughter, Abby (Sarah Steele), who's suffering self-esteem issues of her own with poor complexion and fitting into jeans.

Ann Guilbert is hilariously on-point as Andra, a crabby 91-year-old tenant who's neighbors with the family, never playing it as a lovably dotty grandma cliché. Instead of a “Hello,” she answers the door to Alex with “You gained weight.” Once Andra dies, the family plans to combine apartments, expanding onto their well-to-do lifestyle. Rebecca (Rebecca Hall), a shy radiology technician, is devoted to taking care of her crotchety grandmother, while her sister, the vain and tanning-obsessed Mary (Amanda Peet), thinks she's a mean old bag.

"Please Give" observes guilt, inner crisis, and the grass being greener on the other side in devastating, caustically funny, subtle ways with somber (but not dreary) undertones and never judges the richly drawn characters, even if we do. One story element (Alex's fling with Mary after he starts getting facials at her spa) doesn't really ring true. But everyone in the cast is so dead-on and attuned to their characters that subplots like that don't feel as arbitrary as they just go along with the film's overall themes. "Please Give" is such a wonderful, naturally acted piece of work that Holofcener can joyfully call her own and add to her canon.