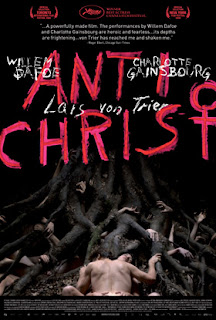 The best way to deal with a severe state of depression for a filmmaker, in Danish provocateur Lars von Trier's crazy mind, is to make pointless, pretentious arthouse-horror lunacy. His self-therapy, "Antichrist," was hailed as extremely controversial at Cannes and he's “outdone” himself, offering up the ugliest, well-made Feel-Bad Movie of the Year™. Hope Lars is feeling better. To really explain the overall experience, that's all you really need to know why the film criminally loses its mind into oppressively grim and ponderous psychosexual “torture-porn.” The near-six-minute, dialogue-free prologue, shot in slow-motion black and white and scored to Georg Friedrich Handel's operatic aria "Rinaldo," is stunning and hauntingly tragic: untamed, artfully photographed shower sex as a bedroom window opens and a toddler totters on up to the window, only to fall stories down to the helpless little one's own death on a snow-covered ground. Very painterly this scene, but there's a hardcore insertion shot that just seems gratuitous and exploitative, which is how the rest of the film ends up going.

Willem Dafoe and Charlotte Gainsbourg are courageous, lamblike customers being put through the wringer and going to such dark places as He and She, the nameless couple. She's grieving and He's her personal therapist. He wants to heal her by going to the place She fears the most, Eden, their cabin in the woods, but nature is Satan's church. A self-cannibalizing, talking fox utters, “Chaos reigns,” symbolic acorns rain down on the cabin roof, and a stillborn fawn protrudes from a doe's rump. Now, Dafoe and Gainsbourg give guts-out, physically and emotionally exposing performances, and von Trier is an interesting and provocative filmmaker of fearlessness, no doubt about it. But his "Antichrist," although starting out mesmerizing in its first few chapters, grows tedious, dreary, and heavy-handed to outright punishing. You start to identify with He and She's misery all too well.

If it was von Trier's goal to say something profound, no dice. If he just self-consciously wanted to shock us, mission accomplished. Leading up to the epilogue is "Antichrist's" nonconsensual, NC-17 climax: genital mutilation. Unpleasant, disturbing, too painful for comfort's sake, and for hollow reason. More context behind She taking shears to her clitoris would have been nice. Avant-garde style and wallowing in perverse, sinister imagery of the carnal and the violent aside, what the hell is von Trier trying to say? Is he saying that women are inherently wicked? It's hard to tell and even harder to care.